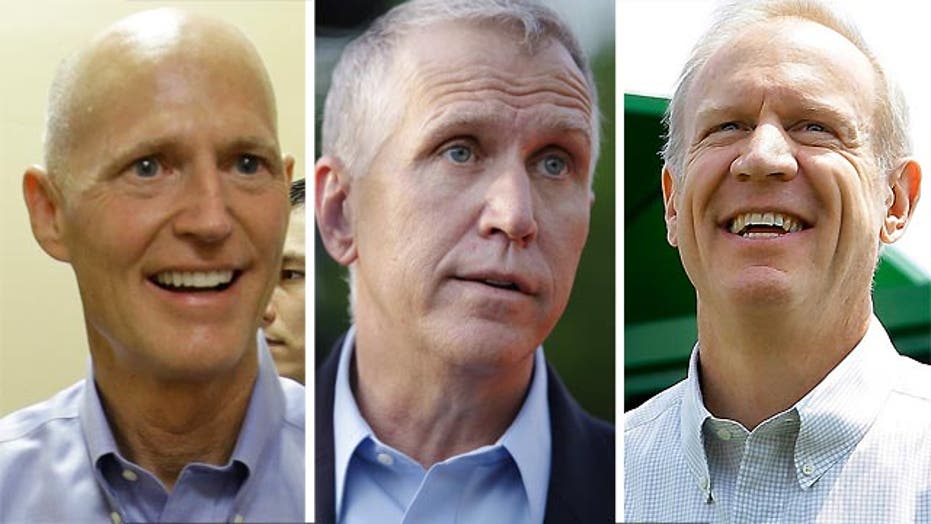 Larry Sabato, director of the Center for Politics at the University of Virginia, weighs in

Former Florida Gov. Charlie Crist is set to find out how much momentum he has for a political comeback, as Democratic primary voters decide whether to nominate the former Republican for a chance to reclaim his old job.

Florida is one of four states where voters will cast primary and runoff ballots Tuesday.

With a huge advantage in fundraising and name recognition, Crist is a heavy favorite over former Senate Democratic leader Nan Rich. The question is whether his victory margin will match those advantages or instead suggest that he's struggling to connect with core Democrats.

Republican Gov. Rick Scott is expected to coast to his party's nomination for a second term.

Republicans in Vermont will decide among four candidates who want to take on Democratic Gov. Peter Shumlin, who also serves as chairman of his party's national governors association. Other statewide offices, including an at-large House seat, also are on the ballot.

The Florida race has gained national attention both for Crist's resurrection attempt and Scott's struggles.

Scott, a wealthy health care executive who had never held public office before, won the job with less than a majority in 2010, and his first term has been marked by low approval ratings and struggles against the GOP-led legislature.

All of that has Democrats primed for an opportunity to pick up a governor's seat in a state President Barack Obama won twice. But in their favorite, they have a Republican-turned-independent-turned-Democrat who has left some party faithful wary.

Arlen Ustin, a 72-year-old retiree in Delray Beach, said Crist has been "insulting" to Democrats by refusing to debate Rich and campaigning as if the general election was already at hand. "I will be out there for him" should he win, Ustin said, but she added, "It can't be the way I am for Nan because she's just exceptional."

Crist's last foray into statewide politics ended in embarrassment for him and for Democrats. In 2010, three years into his term as governor, Crist decided not to run for re-election, instead trying for the Senate. Already unpopular among conservatives in part for backing Obama's economic stimulus law, he ran as an independent rather than face GOP primary voters. Crist finished well behind the eventual winner, Republican Marco Rubio, but still relegated the Democratic nominee to an even more distant third.

Since then, Crist declared he was a Democrat, complete with a full embrace of the Obama administration. He endorsed the president for a second term in 2012 and campaigns as an unapologetic defender of Obama's health care law. That sets up the potential fault lines in a race against Scott, who initially called for expanding Medicaid insurance rolls under the new law but backed off when GOP lawmakers balked.

In Arizona, Brewer has put her muscle behind former Mesa Mayor Scott Smith. The pair appeared together at multiple campaign stops Monday trying to rally last-minute support. But state Treasurer Doug Ducey has painted himself as the front-runner in the race, citing a broad coalition of business leaders and other political figures. The field includes former GoDaddy executive Christine Jones and Secretary of State Ken Bennett, among others.

Democrat Fred DuVal is unopposed in his primary and will face the GOP winner in November.

Brewer stressed in a recent appearance that the GOP nominee must work quickly after a bitter, expensive primary. "We all know that during a primary, things get kinda hot and heavy," she said.

In Vermont, the most interesting dynamics may involve write-in campaigns by third-party hopefuls trying to crash the major party primaries.

Dan Feliciano is a Libertarian, but he's running for the Senate as a write-in candidate in the Republican primary against three other candidates -- Scott Milne, Steve Berry and Emily Peyton -- whose names appear on the ballots. Milne, a businessman, is the favorite.

Meanwhile, Democrats were expected to nominate a write-in candidate -- Progressive Dean Corren -- for lieutenant governor after the only candidate dropped out.