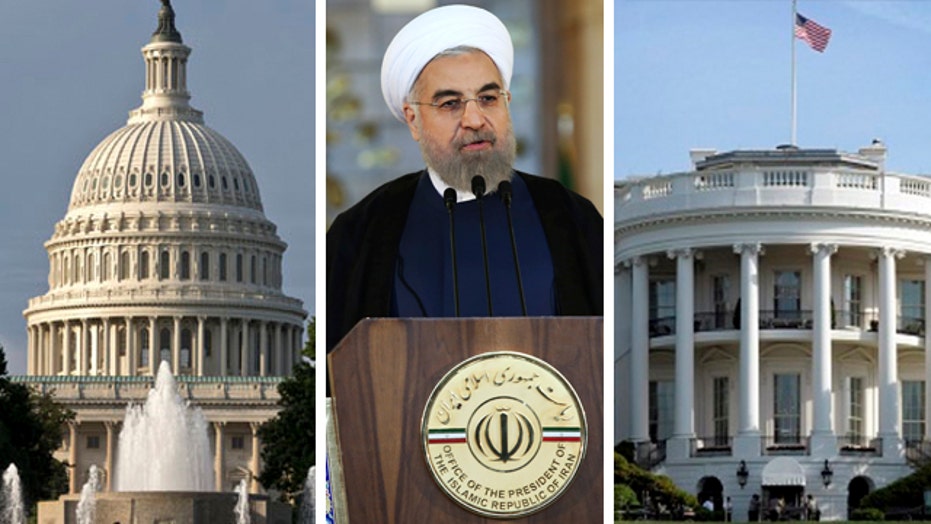 It's doubtful Congress will vote on President Obama's nuclear accord with Iran until September.

But it's quite possible the month of August could be the timeframe that either makes or breaks the deal.

Congress will barely convene in August. That's the month when lawmakers escape the capital. But August prevails as a peculiar political period -- an often-volatile 31 days, when lawmakers return to their districts and face pressure from voters. The "recess" frequently shapes the congressional landscape for September and beyond.

Recall the combustible congressional town hall meetings on health care in August of 2009?

Congress will soon launch a two-month window in which to review the Iran package. It could culminate in multiple votes and perhaps a veto showdown in September. Obama's national security team is making the case for the deal now, and Vice President Biden descended on Capitol Hill for a huddle with House Democrats Wednesday. The vice president returns for a meeting with Democratic members of the Senate Foreign Relations Committee Thursday. A number of Jewish lawmakers head for the White House as well. Meanwhile, Senate Foreign Relations Committee Chairman Bob Corker, R-Tenn., plans to hold the first hearing on the deal next Thursday. Expect a similar meeting of the House Foreign Affairs Committee around that time, too.

But the fate of the deal could well fall in August as lawmakers mull what they heard in July, prepping for climactic votes in September.

"I personally cannot think of a more consequential vote that each of you will cast," former Sen. Joe Lieberman warned members at an Iran hearing Tuesday.

It's hard to unearth many Republicans who haven't already made up their minds. Take Rep. Lee Zeldin, R-N.Y.

"I don't need to wait 30 days or 60 days," Zeldin scoffed at the Tuesday hearing "America got played."

But it's a different situation with Democrats. Democrats aren't dissing the deal. But they aren't embracing it with a bear hug, either.

"I urge every other member to take time to review this carefully to see whether or not it accomplishes the objective," said House Minority Whip Steny Hoyer, D-Md. He himself wasn't ready to pass judgment on the plan.

Remember, most Democrats abandoned Obama last month on votes to grant him expedited authority to approve a major trade deal with Asian nations. That experience is burned fresh in the minds of those who toil in the West Wing.

The GOP may control both bodies of Congress and have the votes to reject the Iran measure. But Republicans aren't the linchpin. Democrats are. It's nearly a foregone conclusion that both houses of Congress will vote to against the deal -- mostly with Republican votes. Obama anticipated this scenario when he announced the pact early Tuesday.

"I will veto any legislation that prevents the successful implementation of this deal," said the president.

That sets up the real possibility of a veto override showdown -- framed in August.

Overriding a veto requires a two-thirds vote of both bodies of Congress. Republicans can't cross that threshold on their own. Engineering a successful veto override entails plucking off a large stash of Democrats -- perhaps Democrats from swing constituencies or those facing challenging re-elections next year.

Iran agreement opponents can apply a lot of pressure on those Democrats in August. That's why the Obama administration is quickly shoring up support from within the party.

"I'm here to answer questions and explain what the deal is," said Biden without breaking stride, heading into a meeting with the House Democratic Caucus. "I'm confident that hopefully they like it when they understand it all."

After the discussion, Steve Israel told reporters Biden marketed the package to Democrats.

"I don't believe the vice president came in believing this was a slam dunk either way," Israel said.

"I'm still reviewing it. I'm inclined to support it," said Rep. Joaquin Castro, D-Texas, adding he's not "completely there yet."

That could be where August comes in, as the GOP argues its case against the deal.

There are preliminary conversations in Republican leadership circles over how to structure a vote on the Iran agreement. A "resolution of disapproval" would trigger a veto fight with Obama. But senior congressional GOP leadership aides say a "resolution of approval" could serve as a critical "messaging" tool for Republicans and force Democrats to take a challenging vote. It's also possible the Republican brass could ask lawmakers to vote on both scenarios.

"I don't think this is going to be a dominant issue over the August recess," predicted Israel. "It will not dictate whether a race is won or lost."

"I'm not sure that it's politically disadvantageous to members," said Hoyer. "I think the American public may well agree with the president on this."

Pollsters will hit the field in the next couple of weeks to calibrate the public's position on Iran. That could influence how some lawmakers vote -- in September -- based on conclusions reached in August.

But Israel isn't sold on the August crucible.

"I don't believe August will be hot and heavy on this deal," proffered Israel. "In September, it gets hotter and heavier."