The wife of embattled Virginia Gov. Ralph Northam is at the center of another potentially embarrassing moment for the state's Democratic leadership, after an African-American legislative page claimed she gave her and another black page a ball of cotton and asked, "Can you imagine being an enslaved person and having to pick this all day?"

In a letter to Pam Northam that was dated Monday and obtained by WAVY-TV, the unidentified eighth-grader said the first lady's "comments and just the way you carried yourself ... was beyond inappropriate, especially considering recent events with the governor.

"From the time we walked into the [Executive] mansion ... I did not receive a welcoming vibe," said the student, who called the experience "very testing."

In an emailed statement, Northam spokeswoman Ofirah Yheskel denied that the first lady had singled the black students out when she led them on a tour of the mansion and an adjacent building that had once served as a kitchen. 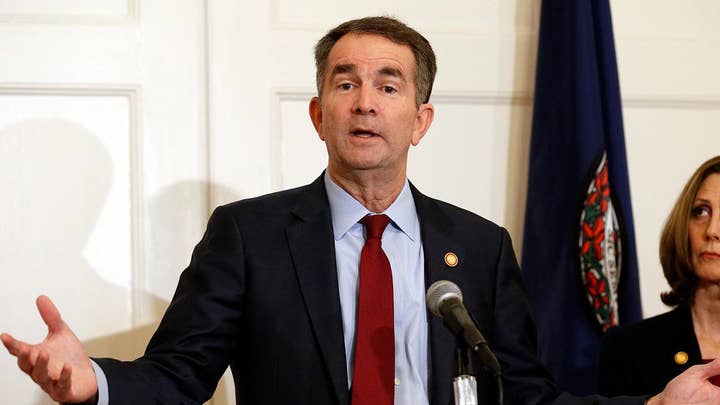 "She did not single anyone out, she invited all of the pages to touch agricultural products (such as dried tobacco, produce, cotton) and artifacts displayed in the Historic Kitchen as part of an educational tour," Yhsekel said.

In a separate statement, Pam Northam said: "The Historic Kitchen should be a feature of Executive Mansion tours, and I believe it does a disservice to Virginians to omit the stories of the enslaved people who lived and worked there -- that's why I have been engaged in an effort to thoughtfully and honestly share this important story since I arrived in Richmond.

"I have provided the same educational tour to Executive Mansion visitors over the last few months and used a variety of artifacts and agricultural crops with the intention of illustrating a painful period of Virginia history. I regret that I have upset anyone."

Ralph Northam has defied calls from the state and national Democratic Party to resign since a racist photo on his 1984 medical school yearbook page surfaced on Feb. 1. Northam initially apologized for appearing in the photo, which showed one man in blackface and another in the cloak and pointed hood of a Ku Klux Klan member. The following day, he said he no longer believed he was in the photo, though he acknowledged having worn blackface the same year to look like Michael Jackson in a dance contest.

NORTHAM VOWS TO STAY IN OFFICE TO HELP VIRGINIA 'HEAL,' BUT SAYS FAIRFAX, HERRING MAY NEED TO RESIGN

Northam has largely stayed out of sight, only appearing in public at the funeral of a state trooper. Meanwhile, Lt. Gov. Justin Fairfax has been accused of sexual assault by two women, and Attorney General Mark Herring admitted to wearing blackface in college.

Last week, Northam canceled plans to attend a civil rights commemoration event at historically black Virginia Union University after students asked him not to come, saying his presence could overshadow the event.

The Post reported Wednesday that the girl's mother, Leah Dozier Walker, the director of equity and engagement at the Virginia Department of Education, wrote in a letter to lawmakers and the governor's office that Mrs. Northam's actions "do not lead me to believe that this governor’s office has taken seriously the harm and hurt they have caused African-Americans in Virginia or that they are deserving of our forgiveness."