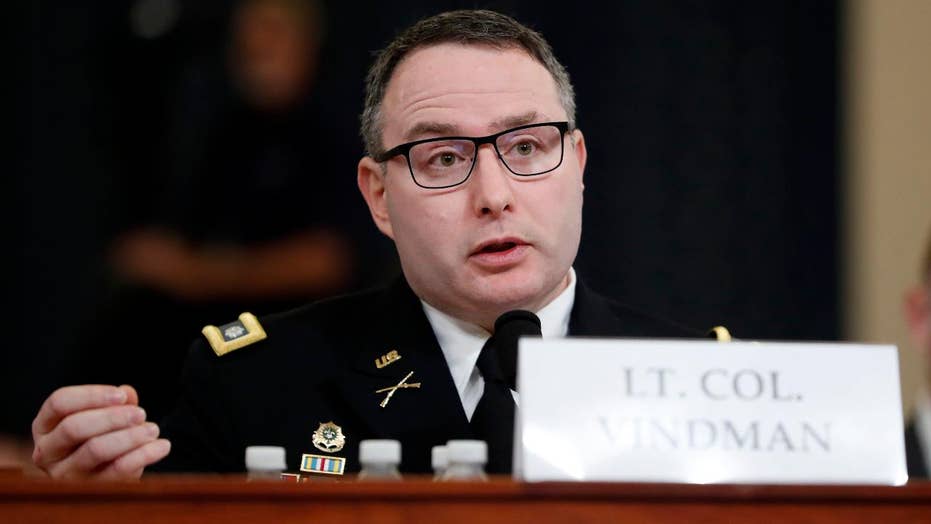 The most dramatic moment was the tussle between Adam Schiff and Devin Nunes over the whistleblower's identity, says 'Fox News Sunday' anchor Chris Wallace.

White House official Lt. Col. Alexander Vindman testified Tuesday as part of the House impeachment inquiry that he was asked to serve as Ukraine’s defense minister -- but repeatedly denied the offers -- when he traveled to Kiev for the inauguration of President Volodymyr Zelensky.

“Every single time, I dismissed it,” Vindman said. “Upon returning, I notified my chain of command and the appropriate counterintelligence folks about this offer.”

Castor pressed Vindman, saying the post was “a pretty key position” in Ukraine’s war against Russia, and added that it would have been an “honor” for Danylyuk to “bestow” the offer to him.

“I think it would be a great honor,” Vindman said, adding that he was “aware of service members that have left service to help nurture the developing democracies in that part of the world, certainly in the Baltics.”

“But I am an American,” Vindman said. “I came here when I was a toddler and I immediately dismissed these offers. Did not entertain them.”

Vindman went on to say that “the whole notion is rather comical, that I was being asked to consider whether I wanted to be minister of defense.”

“I did not leave the door open at all, but it is pretty funny, for a lieutenant colonel of the U.S. Army, which really is not that senior, to be offered that illustrious of a position,” he said, noting that the offers were made in English, and that Danylyuk is a “flawless English speaker.”

Castor went on to ask Vindman whether he reported the offers to his superiors in the U.S., to which Vindman replied: “I did, but I don’t know if I fully entertained that as a legitimate offer. I just made sure I did the right thing in terms of reporting it.”

Vindman was then asked whether the invitation would have created “a perception of a conflict that Ukrainians thought so highly of you to offer you defense ministry” while he served as a top official on the White Houses’ National Security Council.

He added: “And frankly, if they were concerned about me being able to perform my duties, they would have brought that to my attention.”

The president’s request came after millions in U.S. military aid to Ukraine had been frozen, which Democrats and witnesses have claimed shows a "quid pro quo" arrangement. Trump denies that.