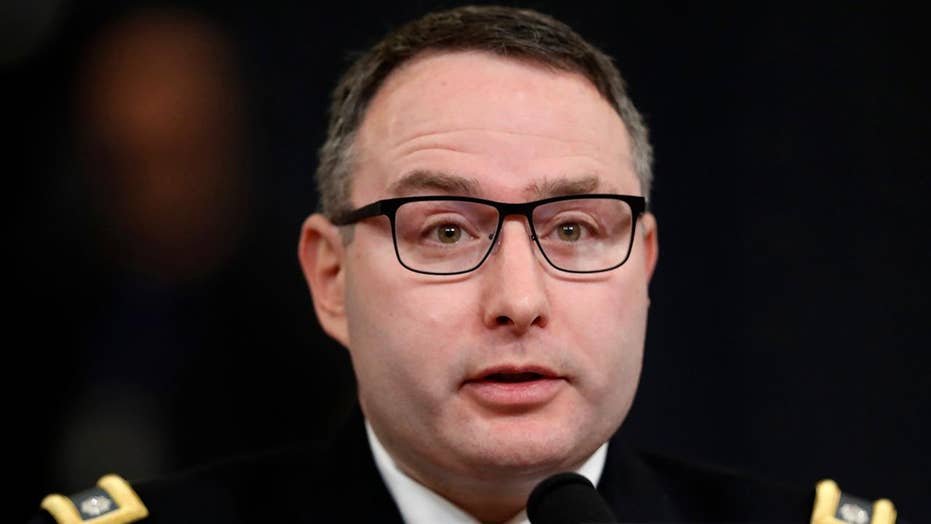 Lt. Col. Alexander Vindman testifies that he's been 'excluded from several meetings that would have been appropriate for my position' since his first deposition in the impeachment inquiry against President Trump

A key witness in Tuesday's impeachment inquiry hearings testified that he was left out of meetings following his communications about President Trump's July 25 phone call with Ukranian President Voldomyr Zelensky and the release of his testimony in a closed-door deposition to multiple House committees.

During questioning, Rep. Jackie Speier, D-Calif., asked Lt. Col. Alexander Vindman, an Army officer at the National Security Council, if his "experience" in his job "changed" after the deposition.  Although Jennifer Williams, Vindman's counterpart at Vice President Mike Pence’s office, said her experience had not changed, Vindman said his had.

"Since the report on July 25, as I stated, I did notice I was being excluded from several meetings that would have been appropriate for my position," he said.

SCHIFF SCRAMBLES TO STOP WHISTLEBLOWER FROM BEING NAMED, AFTER VINDMAN REVEALS INTEL CONTACT

Speier pressed Vindman on whether or not those actions could be construed as retaliation against him.

"So in some respects, then, there have been reprisals?" she inquired.

Vindman responded: "I'm not sure if I can make that judgment. I can say it was out of the course of normal affairs to not have me participate in some of these events."

Democrats have drawn attention to what they characterize as unfair treatment of former Ambassador to Ukraine Marie Yovanovitch by Trump and his associates, including alleged "intimidation" when Trump live-tweeted criticism during her appearance in a public hearing on Friday.

The claim that Vindman is being left out of meetings could be used by Democrats to build their case that the Trump administration is attempting to prevent potential witnesses from cooperating with the inquiry.

Tuesday’s sessions at the House Intelligence Committee started with Vindman and Williams, both foreign policy experts who previously said they listened with concern as Trump spoke on July 25 with the newly elected Ukraine president. An intelligence community whistleblower’s complaint about that call led the House to launch the impeachment investigation, which was eventually formalized in a resolution passed before the beginning of public hearings last week.

Trump asked Zelensky to investigate Burisma Holdings and a widely challenged conspiracy theory that Ukraine interfered in the 2016 elections against Trump. Burisma is a Ukranian gas company that 2020 Democratic contender Joe Biden's son, Hunter, previously worked for as a board member. Biden had little known qualifications to hold such a position. The senior Biden, while vice president, later demanded the removal of a prosecutor who was looking into Burisma, although that came after the Burisma investigation was closed.

Democrats have accused Trump of withholding an Oval Office meeting and almost $400 million in military aid from Zelensky as leverage to persuade him to pursue those investigations, which would have been politically beneficial to Trump.

Former U.S. special envoy to Ukraine, Kurt Volker, and Tim Morrison, who was previously the top advisor on the National Security Council handling Russian and European affairs, will testify in another public impeachment hearing Tuesday in the second session of a week that will see nine witnesses testify over five hearings.