"When she says 'We go high when they go low,' she's talking right now when her husband's administration has weaponized the IRS, the FBI, the DOJ, the CIA, and is the subject of a massive investigation by [Connecticut U.S. Attorney John Durham]," Hanson said.

"It will probably end up, if things happen as many predict, as one of the most corrupt administrations that tried to destroy a political campaign, a president, transition, and a presidency," Hanson added, "and she's saying, 'When they go low, we go high.'"

The former first lady leaned on her most famous catchphrase during a scathing rebuke of the Trump administration. Michelle Obama first uttered the now-viral motto “When they go low, we go high” during her speech in support of Hillary Clinton at the 2016 Democratic National Convention. 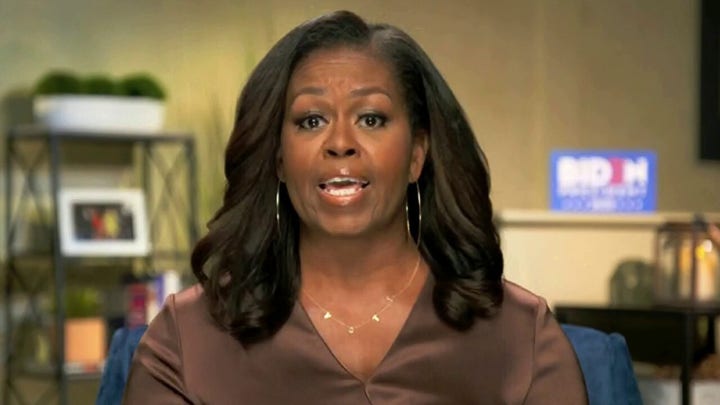 Speaking at this year’s event on behalf of presumptive Democratic presidential nominee Joe Biden, Obama doubled down on the slogan, arguing that “going high is the only thing that works.”

Hanson also challenged the former first lady's claim in her remarks that "Black lives are being indiscriminately, almost daily, killed on the street," which he said represents a "common theme" among Democrats who "say these things that aren't true."

"Michelle Obama knows that there were over 100 people killed in one month alone in her hometown in Chicago," he said. "They weren't killed by White people. They weren't killed by the police. There's been over 400 ... she knows what the real problem is, but she also knows that she could go to Chicago with Barack ... meet with community leaders and say, 'We have a crisis in Chicago in general and among the African-American community.'"

However, Hanson continued,"it's very easy to say something from your Washington or Martha's Vineyard $20 million estate and mansion because you're never going to be subject to the ramifications.

"Black Lives Matter's not going to show up outside of her mansion and there's not going to be an inner-city shooting match right outside [in] Martha's Vineyard. So these all become abstractions."