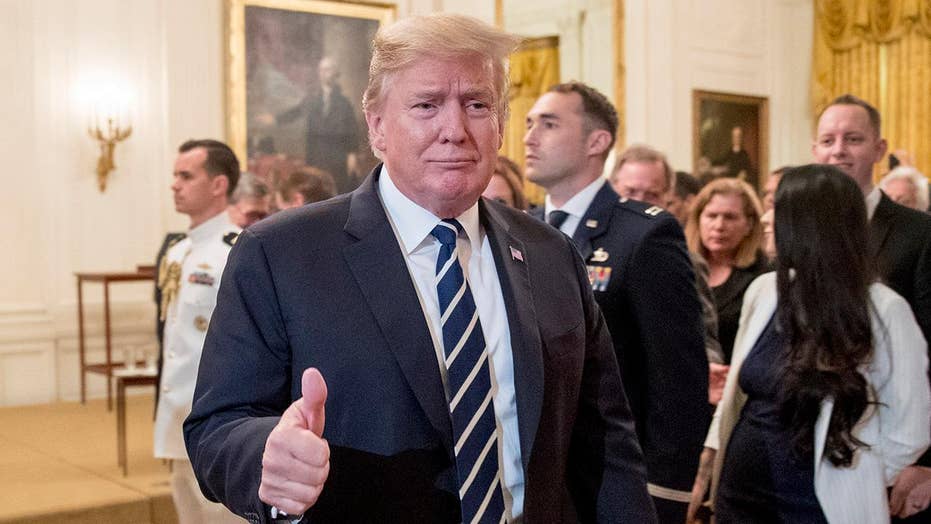 President Trump is considering potential pardons for military members and contractors accused of war crimes as Memorial Day approaches -- deliberations that have prompted warnings from critics that the move could undermine the rule of law but also raised the hopes of their families who say the servicemembers were wrongly prosecuted.

Jessica Slatten, in an interview Thursday, told Fox News she's praying for Trump to pardon her brother, Nicholas Slatten, one of several Blackwater contractors charged in the shooting deaths of Iraqi civilians in September 2007.

CONRAD BLACK BLASTS PROSECUTORS, FBI IN FIRST US INTERVIEW SINCE PARDON FROM TRUMP

"Nick is innocent and our family is terrified that he will die in prison for a killing that someone else confessed to multiple times," she said.

The Blackwater case, and the 2007 massacre at the heart of it, is one of the more controversial portfolios before the president. The New York Times first reported that Trump was weighing possible pardon decisions on an expedited basis going into the holiday weekend.

Speaking to reporters Friday, Trump confirmed he’s looking at a handful of cases, while indicating he could still wait to make his decision.

“We teach them how to be great fighters, and then when they fight, sometimes they get really treated very unfairly, so we’re going to take a look at it,” he said. “[The cases are] a little bit controversial. It’s very possible that I’ll let the trials go on, and I’ll make my decision after the trial.”

The review spurred harsh criticism from Democratic lawmakers as well as former top military officials, especially since not all of the accused have faced trial yet.

"Obviously, the president can pardon whoever he thinks it's appropriate to pardon, but ... you have to be careful as a senior commander about unduly influencing the process before the investigation has been adjudicated," said retired Navy Adm. William McRaven, former head of Joint Special Operations Command.

Sen. Dianne Feinstein, D-Calif., said in a statement: "If he follows through, President Trump would undermine American treaty obligations and our military justice system, damage relations with foreign partners and give our enemies one more propaganda tool."

The lawyers and family members of the accused, however, insist these cases are not as clear-cut as they've been portrayed -- and, to the contrary, have been marred by legal problems.

The cases include those of former Green Beret Maj. Mathew Golsteyn, who admitted to killing a suspected Taliban bomb maker; Navy SEALS Special Operations Chief Edward Gallagher, whose own SEALS turned him in for allegedly shooting unarmed civilians and killing a 15-year-old ISIS suspect in his custody with a knife; four Marine snipers who were caught on video urinating on the corpses of suspected Taliban members; and Slatten.

Slatten is one whose case did go to trial. In fact, he faced three of them.

The first ended in a conviction, but it was later thrown out -- as federal judges said he should have been tried separately from three other co-defendants, one of whom said he, and not Slatten, fired the first shots.

The second ended in a mistrial, and the third resulted in a guilty verdict. He faces a mandatory life sentence without parole, but his legal team is fighting to set him free.

"Prosecuting veterans for split-second decisions in war zone incidents is wrong," Slatten's attorney said in a letter to the White House counsel's office obtained by Fox News. "Prosecuting ones for killings they did not commit is doubly so."

The letter is dated Tuesday, three days after the Times reported on the possible pardons.

Slatten's team argues that prosecutors have the facts of his case all wrong. The letter says that he was not the one who shot and killed Ahmed Haithem Ahmed Al Rubia'y, and that one of his teammates confessed to the shooting multiple times. Additionally, it claims that any shooting from their side was in self-defense. Further, the letter says Iraqi eyewitnesses changed their story about what happened after the fact.

Slatten and other Blackwater contractors were in the "Red Zone" in Baghdad on that day in 2007, trying to rescue a diplomat after a car bomb had gone off in the area, his defense says. They were told to watch out for a white Kia sedan and, when they saw a car matching that description coming toward them, Slatten's teammate fired, killing the driver, the letter says. At that point, a firefight erupted, resulting in Slatten's team's vehicle taking damage.

As it turned out, driver Al Rubia'y was a civilian, not a car-bomber.

Prosecutors said that Slatten was the one who killed Al Rubia'y and that the Blackwater team opened fire on a crowd of unarmed Iraqis, 14 of whom were killed. Even more were injured.

The jury foreperson explained the reasoning behind the guilty verdict to The Washington Post.

"There had been a lookout for a white Kia," the foreperson said. "But there's a million Kias in Iraq, you don't just shoot every white Kia."

Still, the foreperson questioned the charge of first-degree murder, without any lesser charges for the jury to consider: "I understand it, but there’s a bit of unjustness to it."

Three of the other Blackwater contractors involved in the incident -- Paul Slough, Evan Liberty and Dustin Heard -- were convicted of manslaughter, but the D.C. Court of Appeals ruled that their mandatory 30-year sentence was a violation of the Eighth Amendment's prohibition of cruel and unusual punishment.

The sentences had been so severe due to a charge related to the use of machine guns. The court noted that the charge was based on a statute meant to combat gang violence, not contractors in a war zone using government-issue weapons. Their cases were sent back down to a lower court, and they are awaiting new sentences.

It is unclear if Slough, Liberty or Heard are among those Trump is considering for pardons, but Slough's wife Christin is hoping for the best.

"I think that we're cautiously optimistic," she told Fox News. She said that her husband is "more than well deserving" of a pardon and is hoping that Trump will come through where other administrations have not.

Legally, a pardon can be issued at any time, not just after a conviction. President Gerald Ford pardoned Richard Nixon despite Nixon not facing formal charges. The acceptance of a pardon is technically an admission of wrongdoing, according to the Supreme Court's 1915 decision in Burdick v. United States, which factored into Ford's decision.

The case of former Green Beret Golsteyn has a degree of mystery to it. He first drew attention when he admitted during a 2011 CIA job interview that he shot and killed a suspected bomb maker. The Army investigated, stripped him of awards and sent him a written reprimand, but did not charge him.

When Golsteyn appeared on Fox News in 2016, he told host Bret Baier that he shot the suspect. This sparked a second Army investigation, and Golsteyn was charged with murder in December 2018.

According to The New York Times, Army documents showed that an Afghan tribal source expressed fear that they would be in danger if the suspect went free. Golsteyn and another American soldier also worried that U.S. troops would be in jeopardy, the documents said.

His wife Julie Golsteyn, in a recent interview with Fox News, blasted the prosecution in the case. "I am heartbroken as Matt's wife, and a mother, and an American that this is how we treat somebody who put himself in such grave danger to make sure that his men came home," she said.

Gallagher, meanwhile, is scheduled to go to trial on May 28 for allegedly stabbing a teen ISIS suspect to death. His defense maintains that he is innocent and that SEALS turned him in because he was demanding and they wanted to get rid of him.

His attorney, Timothy Parlatore, said his client would accept a pardon, but that he would like to have Gallagher acquitted.

"We want the opportunity to exonerate my client,” Parlatore told the Times. “At the same time, there is always a risk in going to trial. My primary objective is to get Chief Gallagher home to his family. To that end, Chief Gallagher would welcome any involvement by the president."

Martin Dempsey, former chairman of the Joint Chiefs of Staff, warned of the consequences that pardons could bring.

"Absent evidence of innocence of injustice the wholesale pardon of US servicemembers accused of warcrimes signals our troops and allies that we don't take the Law of Armed Conflicts seriously," Dempsey tweeted Tuesday. "Bad message. Bad precedent. Abdication of moral responsibility. Risk to us."

Trump's decision could come in time for the Memorial Day holiday, though he indicated Friday he might take longer. Despite warnings that a pardon might not be appropriate for cases that have not concluded, Christin Slough noted Trump is not a "traditional president."

She said he is "more interested in what's right," than how things are normally done.