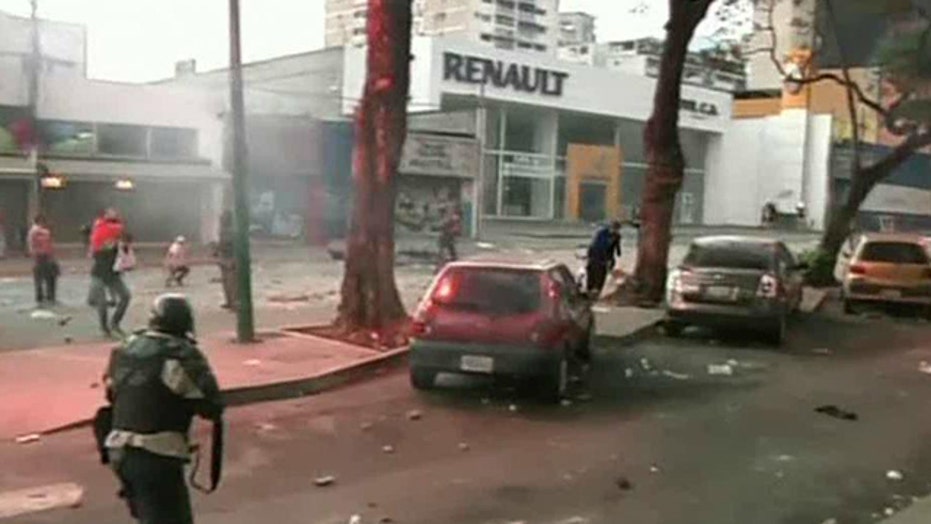 CARACAS, Venezuela – President Nicolas Maduro on Sunday ordered the expulsion of three U.S. Embassy officials after Washington came to the defense of an opposition hard-liner accused by Venezuela's leader of responsibility for bloodshed during anti-government protests.

Maduro didn't identify the consular officials but said intelligence collected over the past two months pointed to attempts by them to infiltrate Venezuelan universities, a hotbed of recent unrest, under the cover of doing visa outreach. He didn't provide additional details.

Triggering the expulsion was the Obama administration's siding with opposition leader Leopoldo Lopez, who is being hunted by authorities as Maduro accuses him of leading a "fascist" plot to oust the socialist government.

Maduro said a State Department official, in a phone conversation with Venezuela's ambassador to the Washington-based Organization of American States, warned that arresting the 42-year-old former mayor would bring serious negative consequences with international ramifications.

"These are unacceptable, insolent demands," Maduro said during a televised address Sunday night. "I don't take orders from anyone in the world."

There was no immediate reaction from the U.S. government, which has denied the accusations of Maduro that it is plotting with the opposition against him.

The Harvard-educated Lopez has been at the center of rising tensions in Venezuela since he led the biggest demonstration yet against Maduro's 10-month-old government, mobilizing more than 10,000 people on Wednesday to peacefully protest hardships ranging from rampant crime to 56 percent inflation.

The government blamed him for the mayhem that erupted after the rally ended and a group of students battled with security forces and armed pro-government militias, leaving three dead. Most of the demonstrators had gone home before the violence broke out.

In his TV speech, Maduro called for a march by oil workers Tuesday beginning at the same central plaza in Caracas where Lopez said he would rally with supporters the same day, setting up the potential for clashes between the opposing forces.

Lopez announced his plans a few hours before Maduro's speech, appearing in a video shot at an undisclosed location. He said he didn't fear arrest but accused authorities of trying to violate his constitutional right to protest Maduro's government.

He said that after Tuesday's march to the Interior Ministry he planned to walk the final steps alone to the agency to deliver a petition demanding a full investigation of the government's role in the deaths. He said he would surrender to officials then in answer to an arrest order on charges ranging from vandalism of public property to terrorism and homicide.

"I haven't committed any crime," said Lopez, who hasn't been seen in public since a news conference Wednesday night after the bloodshed.  "If there is a decision to legally throw me in jail I'll submit myself to this persecution."

He urged supporters to wear white shirts and march peacefully with him to the Interior Ministry.

Lopez's comments came after security forces raided his home and that of his parents late Saturday, seeking to serve the arrest order. Lopez wasn't at either residence in Caracas' leafy eastern district when national guardsmen and military intelligence officials arrived. Aides said neighbors banged on pots and pans to protest what they considered an arbitrary detention order.

The raids capped another night of protests during which security forces fired tear gas and rubber bullets to break up a group of about 500 students who vowed to remain on the streets until all arrested anti-government demonstrators are released. Authorities said 23 people were being treated for injuries, none of them life-threatening.

More protests took place Sunday, and authorities said 18 people were injured, none of them seriously.

Lopez is the most prominent of a group of opposition hard-liners who are challenging two-time presidential candidate Henrique Capriles for leadership of the anti-Maduro movement.

U.S. officials have denied any plotting to oust Maduro. Secretary of State John Kerry on Saturday expressed concern over the rising tensions and violence surrounding the protests.

"We are particularly alarmed by reports that the Venezuelan government has arrested or detained scores of anti-government protesters and issued an arrest warrant for opposition leader Leopoldo Lopez," Kerry said in a statement. "These actions have a chilling effect on citizens' rights to express their grievances peacefully."