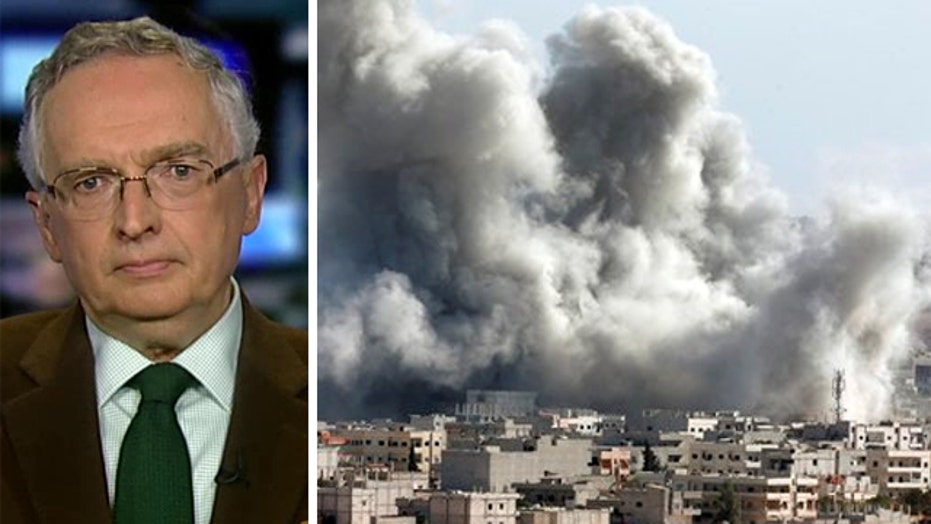 Peters on ISIS: Obama starting to 'do what needs to be done'

U.S. and Kurdish commanders are collaborating closely to ensure that the Syrian border town of Kobani does not fall to Islamic State militants, in a change of earlier policy, according to a published report.

According to The Wall Street Journal, U.S. and Syrian Kurdish military leaders are coordinating air and ground operations around Kobani, with one Kurdish general even helping to spot targets for U.S. airstrikes and delivering battlefield intelligence reports daily to American military planners.

The extent of this new cooperation was demonstrated earlier this week, when American C-130s made 28 separate airdrops of weapons, ammunition, and medical supplies to Kurdish forces fighting to hold the city. The Journal reports that the planned airdrops were presented this past Friday to President Obama, who gave the operation immediate approval. According to the paper, the airdrops were proposed after an assessment that Kobani's defenders could run out of ammunition in as little as three days without them.

The weapons were Kurdish arms, shipped from Irbil in Iraq to Kuwait, where U.S. soldiers sorted them into drop-ready packages, the Journal reports.

In addition to revealing the close cooperation between Washington and the Syrian Kurdish forces, the airdrops also reveal a change in U.S. goals for the airstrikes that have targeted Islamic State fighters in Syria for the past month.

Initially, the Journal reports, the goal of striking positions near Kobani was purely to kill as many members of Islamic State, also known as ISIS, as possible. On Friday, the same day the supply drops reportedly were proposed at the White House, Army Gen. Lloyd Austin, head of U.S. Central Command, cautioned reporters at a Pentagon news conference that "it's highly possible that Kobani may fall." Meanwhile, White House spokesman Josh Earnest said the ISIS focus on Kobani had created "a rather target-rich environment ... for American and coalition air strikes."

However, that changed as ISIS came close to capturing the town, forcing the Kurdish fighters into a desperate battle as thousands of refugees made a run for the Turkish border just a few miles away.

"By stopping them, and by doing tremendous damage to them, you begin to blunt the sense of momentum, particularly in Syria," a senior defense official told the Journal. Another senior U.S. official put it more bluntly: "This is a war of flags. And Kobani was the next place Islamic State wanted to plant its flag ... Kobani became strategic."

Meanwhile, Turkey Foreign Minister Mevlut Cavusoglu said Monday that it would allow Syrian Kurdish refugees to cross through Turkish territory on their way to Kobani from Iraq to fight ISIS. However, The paper reports that no such forces had arrived as of Tuesday.