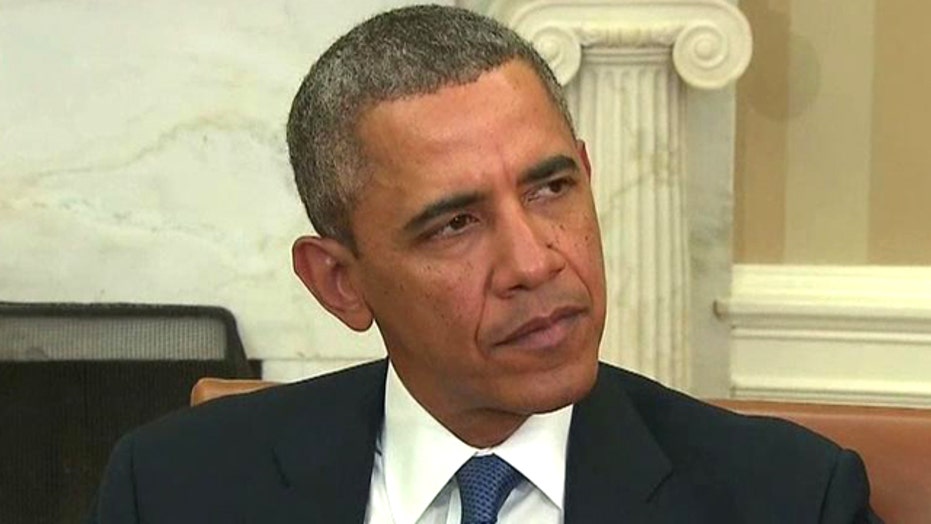 The U.S. announced late Monday it was suspending trade and investment talks with Russia as well as all "military-to-military engagements" as penalties for its actions in Ukraine.

The twin measures were announced only hours after America's U.N. ambassador blasted Russia for its "dangerous military intervention" in Ukraine, calling it a violation of international law and saying: "It must stop."

A spokesperson for the office of the U.S. Trade Representative confirmed to Fox News "due to recent events in Ukraine, we have suspended upcoming bilateral trade and investment engagement with the government of Russia that were part of a move toward deeper commercial and trade ties."

Earlier, the Pentagon said the U.S. was putting on hold "all military-to military engagements" with Russia, including exercises, bilateral meetings,  port visits and planning conferences.

President Obama also met with his National Security Council Monday to discuss the situation. A spokeswoman said Obama and his team discussed what actions the U.S. and its foreign counterparts could do to further isolate Russia, and reinforce the fact that Moscow faces more repercussions if it does not take steps to de-escalate the situation.

A statement from Pentagon Press Secretary Rear Adm. John Kirby also said that despite press speculation about possible U.S. ship movements in the region, "there has been no change to our military posture in Europe or the Mediterranean; our Navy units continue to conduct routine, previously planned operations and exercises with allies and partners in the region."

His remarks followed U.N. Ambassador Samantha Power telling a U.N. Security Council meeting "There is nothing that justifies Russian conduct."

Russian Ambassador to the U.N. Vitaly Churkin defended the use of Russia's military in Ukraine's Crimean Peninsula, claiming the "legitimately elected authorities" in that region asked Russia to intervene and saying this was "completely legitimate under Russian law."

He also claimed Ukraine's ousted president wrote a letter to Russian President Vladimir Putin asking for him to use the military in Ukraine.

Power retorted that Russian officials' statements are "without basis in reality" and "self-serving." She said there's no danger to ethnic Russians living in Ukraine.

The sharp exchange came as western leaders, at the U.N. and elsewhere, scramble to convince Vladimir Putin to stand down.

Earlier, Obama said Russia is "on the wrong side of history" and warned that the U.S. and its allies are examining steps to "isolate" the country. Obama, before a meeting in Washington with Israeli Prime Minister Benjamin Netanyahu, said the world largely is in agreement that Russia is "in violation of international law."

He said Moscow's actions are deeply troubling, and said this would be a "costly proposition" for Russia if it continues down this path.

"We are examining a whole series of steps -- economic, diplomatic -- that will isolate Russia," Obama said.

What specific steps the U.S. and Europe would take to dissuade Putin, though, is an open question, as the cold warrior toys with whether to advance Russian troops beyond the Crimean Peninsula. Despite western countries discussing a range of punishments for Moscow, hardly anybody is pushing military action.

The closest any top-ranking official got was Kerry saying Sunday that "all options are on the table." In a separate interview the same morning, though, Kerry stressed that a military response is "the last thing anybody wants."

It's a far cry from the 2011 Libya uprising against Muammar Qaddafi, when Washington and western European capitals were gripped by robust debate over whether to use force to prop up the rebels.

This time, even the hawkish lawmakers on the Hill are saying it's best to stand down.

"There is not a lot of options on the table. And candidly -- and I'm a fairly hawkish guy -- sending more naval forces to operate in the Black Sea is not a good idea," House Intelligence Committee Chairman Mike Rogers, R-Mich., told "Fox News Sunday."

Sen. John McCain, R-Ariz., called over the weekend for a range of options "without the use of military force."

And on NBC's "Meet the Press," Sen. Marco Rubio, R-Fla., said: "If you're asking me whether the U.S. should be taking military strikes against Russian troops in Ukraine or in Crimea, I would argue to you that I don't think anyone is advocating for that."

So what options are there?

To hear Obama administration officials tell it, they're banking on the assumption that diplomatic and economic pressure can convince Putin to ease off.

On Monday, a diplomat reportedly said the European Union has agreed to consider "targeted measures" against Russia if Moscow does not dial back tensions, though it's unclear what those measures might be.

On the U.S. side, Washington could expand asset freezes and visa bans and other sanctions on powerful Russians. There's also the possibility of imposing trade and investment penalties.

Kerry, who is leaving later Monday for Ukraine, said he has consulted other world leaders and all are committed to doing what is necessary to isolate Russia diplomatically. President Obama spoke Sunday with German Chancellor Angela Merkel, British Prime Minister David Cameron and Polish President Bronislaw Komorowski.

In Brussels, NATO's secretary-general, Anders Fogh Rasmussen, said Russia's actions have violated a U.N. charter. He said the alliance was re-evaluating its relationship with Russia.

But the most immediate penalties appear to revolve around Russia's membership in the G-8. All seven other members of that elite group have announced they are suspending preparation work for an upcoming summit in Russia. Kerry and Capitol Hill lawmakers say Russia also risks being kicked out of the group altogether.

But a few lone voices say economic pressure may not be enough. Notably, retired Adm. James Stavridis, NATO's former Supreme Allied Commander of Europe, said in a Foreign Policy column on Saturday that military options -- and others -- should be discussed.

He urged NATO to develop contingency plans to react to a "full-scale invasion of Ukraine," noting that NATO planners moved quickly in Libya.
He suggested bringing NATO's 25,000-member Response Force to a "higher state of alert" and sailing maritime forces into the Black Sea.

Obama administration officials have pushed back on the possibility of a military confrontation.

"I don't think we're focused right now on the notion of some U.S. military intervention," one official said.

But some fret that the United States is rapidly losing influence on the world stage, absent any severe consequences.

"Everybody says 'no' to the U.S. these days without cost or consequence," Aaron David Miller, former adviser to six secretaries of State and scholar at the Woodrow Wilson International Center for Scholars, told Fox News.

He said the last "truly effective" foreign policy was under former President George H.W. Bush. "There was a cost for saying 'no' to the United States," he reminisced. "Right now, there is no cost."