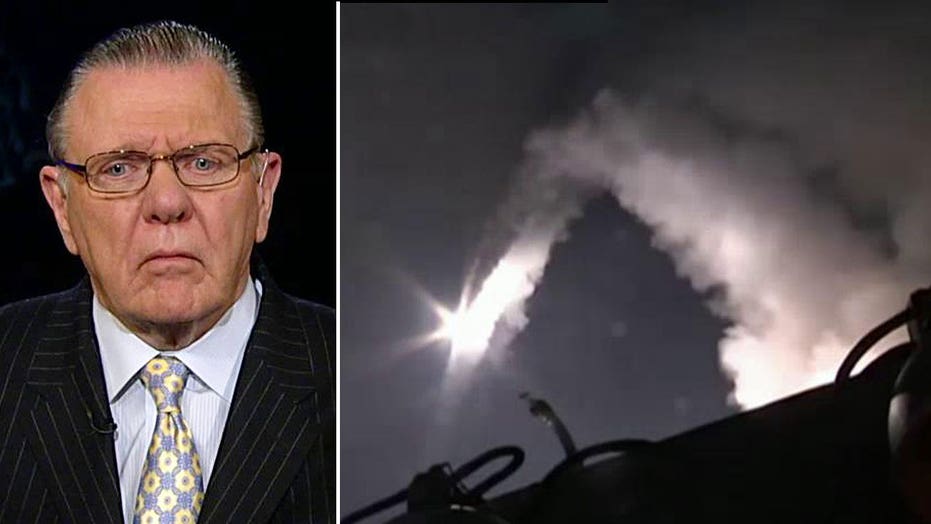 On 'The Kelly File,' the four-star general cautions Russia's aggression, power will grow if left unchecked

Russia has responded to a U.S. proposal to ensure the safety of military aircrafts conducting flying missions in the increasingly crowded Syrian skies and the talks could come as early as this weekend, according to the Pentagon Friday.

The U.S. and Russia are trying to hash out flight procedures to ensure that there are no collisions or other incidents as both countries conduct bombing missions in Syria. Pentagon press secretary Peter Cook told reports traveling back from Europe with Defense Chief Ash Carter that the Russians sent a formal reply and department officials are reviewing it. No other details were provided.

The response comes on the heels of a series of Russian aircraft incident that raised concerns of possible mishaps between the two countries, as the U.S.-led coalition continues to launch airstrikes against ISIS militants in Syria.

Russian planes last weekend crossed into Turkish airspace, triggering immediate protest from Turkey and a vow from NATO that it will defend its member nation. A Russian aircraft nearly collided with an American drone as well. This week, Moscow fired cruise missiles into Syria from ships in the Caspian Sea, and the U.S. says four of them crashed into Iran.

The Pentagon wants an agreement on safety precautions in order to make sure there aren’t any incidents between the two countries in Syria as bombing missions are being conducted. The U.S. has proposed a number of safety measures, including using specific international radio frequencies for distress calls by military pilots in Syrian airspace.

The U.S. has vowed not to engage in any meetings with Russia until Moscow responded with a written response to the draft.

Carter also made it clear that the U.S. will limit any discussions with Russia to basic, technical talks about aircraft safety, saying, "That's it." And he's ruled out any broader cooperation or coordination with Russia as long as Moscow continues to strike targets other than the Islamic State militants in Syria.

The Russians have complained about the narrow scope of the U.S. talks, and Russian Deputy Defense Minister Anatoly Antonov said Moscow wants broad discussions on international cooperation with the U.S.-led coalition fighting the Islamic State.

Russia says the airstrikes it began last week are directed against the Islamic State group, as well as Al Qaeda's Syrian affiliates. But the U.S. and other allies say at least some of the strikes appear to have hit Western-backed rebel factions fighting government troops, with the real goal of protecting Syrian President Bashar Assad.