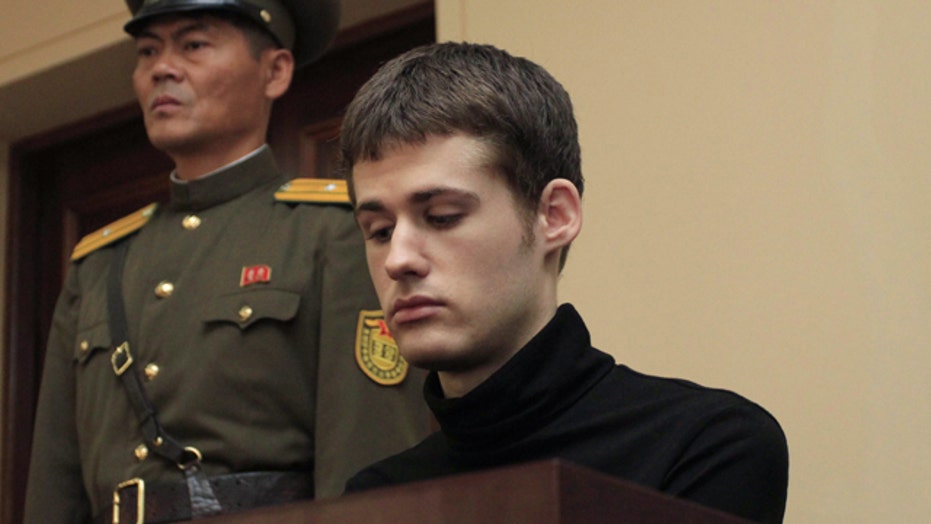 Judy Gross lives just minutes away from the corridors of power in the mightiest nation in the world, but her husband is in a jail cell some 1,200 miles away and no one seems able to help.

Alan Gross, who was working for a U.S. Agency for International Development subcontractor as part of a U.S. government plan to increase Internet access in Cuba, was arrested in December 2009. The 65-year-old was convicted of spying and sentenced to 15 years in prison,  and although he was on a U.S.-sanctioned mission, the State Department is unable -- or as Judy Gross charges, unwilling -- to win his freedom.

“It’s infuriating,” Judy Gross told FoxNews.com. “My first thought is that Alan is not home. So what are they [State Department] doing? It shouldn’t be that difficult.”

Gross is one of possibly hundreds of Americans being held abroad by hostile regimes, terrorist groups and criminal organizations that don't provide due process, according to the David House Agency, a Los Angeles-based international crisis resource agency. Given the U.S. government's longstanding policy of not negotiating with terrorist groups and its lack of formal diplomatic relations with countries like Cuba, Iran and North Korea, getting Americans out of trouble and back onto U.S. soil can be complicated or even impossible.

“It’s not just a global problem. It’s an international reality,” said Eric Volz, managing director for the agency. “Institutional kidnappings are at a rate never seen before. More Americans are traveling internationally and doing mission work. That’s why we are seeing it at a higher rate.”

“It’s reaching a tipping point,” he added. “These are just not isolated incidents.”

State Department officials declined to comment on any Americans being held captive overseas citing “privacy issues." The department has reportedly told families of hostages held by terror groups not to publicize their plight, warning that it could put them in greater jeopardy. But the families of journalists James Foley and Steven Sotloff, both of whom were beheaded in recent weeks by an Islamic State extremist in videos released on the Internet, have angrily denounced the U.S. government for not doing more to help free the men.

Hostile regimes and terrorist groups present different challenges to the U.S., as well as the families of those held captive. The U.S. may have some leverage with even rogue regimes with which it lacks diplomatic relations, either through the bully pulpit, threats of sanctions or even payments made through back channels.

Three Americans are currently being held in North Korea, including missionaries Kenneth Bae, who was sentenced to 15 years in a hard labor camp, and Jeffrey Fowle, an Ohio man caught leaving a Bible in a hotel room. The third, Matthew Miller, 25, was arrested and sentenced to six years in a labor camp after he reportedly entered the Hermit Kingdom and asked for asylum.

State Department spokesman Darby Holladay said Monday the U.S. has asked North Korea to pardon and release Bae and Miller and to release Fowle, “out of humanitarian concern for [him] and his family.” In the past, North Korea has released Americans it held following extra-governmental efforts. In 2009, former President Bill Clinton made what the White House said was a "private" trip to Pyongyang to secure the release of two Current TV journalists who had been captured after crossing into North Korea from China.

Naghmeh Abedini, whose husband Saeed Abedini is serving an eight-year prison term in Iran for proselytizing after he traveled to his homeland in 2012 to help build a secular orphanage, has begged lawmakers and the Obama administration for help. Although President Obama has called for Abedini's release, the Boise, Idaho, man's family wonders why it could not be made a condition for lifting sanctions on the Islamic republic.

“My husband, a U.S. citizen and loving father of our two young children, has been held in Iran's brutal Evin Prison because of his faith -- without a voice to fight for his freedom,” she told the United Nations Human Rights Council last year, after giving similar testimony to U.S. lawmakers. “I must, therefore, be his voice.”

Jordan Sekulow, executive director of the American Center for Law & Justice, which represents Abedini’s family, said Secretary of State John Kerry has spoken out for Abedini, but said more can be done behind the scenes.

“The U.S. State Department has an obligation to do all that it can -- both publicly and privately -- to secure the release of Pastor Saeed, a U.S. citizen imprisoned simply because of his Christian faith," Sekulow said. "Press statements raising Pastor Saeed's plight are helpful, but the truth is the U.S. government must use all of its resources to secure Pastor Saeed's freedom.”

In July, the so-called P5+1 group of world powers lifted crippling economic sanctions against Iran that had been levied to force it to allow nuclear inspections. Abedini's supporters argued that it was the right time to demand Abedini's release, but that was not made a condition. The easing of sanctions is due to be revisited in November.

Another American being held in Iran is former U.S. Marine Amir Mirza Hekmati, a 31-year-old native of Arizona who was arrested on charges of spying in August of 2011, while in Iran to visit his grandmother. Initially sentenced to death, his execution order was overturned and he is currently in prison and awaiting a new trial. Hekmati served in the Marines from 2001-2005, including time in Iraq.

Iran also is believed to be holding Robert Levinson, a former FBI and DEA agent whose family has said was working as a spy for a rogue CIA operation when he disappeared from Iran's Kish Island in 2007. Iran has denied holding the 66-year-old, who is now the longest-held U.S. hostage in history, but U.S. officials believe Iranian intelligence operatives are holding him and are behind a video released to his family in late 2010.

Levinson's family is bitter at the U.S. for not doing more to win his freedom.

"The CIA sent Bob Levinson to Iran to do an investigation on its behalf," said David McGee, a family lawyer and spokesperson deeply involved in efforts to get Levinson released. "And rather than acknowledge what they had done and try and save Bob's life, they denied him."

Iran has also been known to bend, although reluctantly. Three Americans accused of being spies were arrested in Iran in July 2009. Despite demands for their release from the U.S. government and pleas from UN Secretary General Ban Ki-Moon and Amnesty International, two of the hikers, Shane Bauer and Joshua Fattal, were each sentenced to eight years in prison. A third hiker, Sarah Shourd, was released after 14 months on "humanitarian grounds," but Bauer and Fattal spent more than two years behind bars before the Sultan of Oman paid $500,000 for their release.

Even allies, such as Mexico, may rebuff U.S. diplomatic efforts on behalf of citizens whose imprisonment on foreign soil may be unjust. Marine Sgt. Andrew Tahmooressi has been in a Mexican prison since March 31, when he mistakenly crossed the border near San Diego with two guns that were legally possessed in the U.S., but not permitted in Mexico. While Tahmooressi's case is working its way through a Tijuana court, his mother, Jill, and friends who served with him in Afghanistan, say he would be a free man if more pressure on Mexico had been exerted from Washington.

When terrorist groups take Americans hostage, there is little room for negotiations of any kind. The stunning trade of five Guantanamo Bay detainees for U.S. Army Sgt. Bowe Bergdahl, who was being held by Taliban associates, was an exception to an otherwise firm policy of not negotiating with terrorists for fear it will simply encourage more abductions.

Al Qaeda is currently believed to be holding Warren Weinstein, a U.S. government contractor snatched in 2011 in Lahore, Pakistan. Last Christmas, the captors released a video showing the 73-year-old Rockville, Md., man urging the U.S. to negotiate for his release. Al Qaeda's demands included an end to airstrikes in Pakistan, Afghanistan, Somalia and Yemen and the release of unspecified Al Qaeda and Taliban members.

Families, who are typically told to keep quiet about loved ones taken hostage by terror groups, have little choice but to put their trust in the government.

“We keep being told that everything that can be done is being done,” Weinstein's daughter, Jennifer Coakley, told The Washington Post. “This is a man who spent his whole life serving people and devoted all his time and energy to helping people.”

Perhaps the worst outcome for the families of men and women who disappear while in dangerous parts of the world is to never know what happened to them. In the early years of Operation Desert Shield, several Americans were snatched and their status remains unknown to this day. They include:

- Kirk von Ackermann, a U.S. contractor working out of Turkey, disappeared somewhere between Tikrit and Kirkuk on Oct. 9, 2003. His vehicle was found abandoned later that same day. Army investigators determined that he died in a botched kidnapping attempt, but have not divulged details in a case still listed as active.

- Timothy Edward Bell, an Army veteran and contractor for Halliburton, disappeared April 9, 2004, when a fuel convoy he was driving in was attacked just outside of Baghdad. He was never seen in a hostage video and was declared dead in 2010.

- Aban Elias, an Iraqi-American engineer from Denver, was kidnapped in Baghdad on May 3, 2004. In a hostage video released shortly afterward, he identified himself, said he was working for a Pentagon contractor and called upon "Muslim organizations" to help win his release. He was never heard from again.

- Jeffrey Ake, a contractor from LaPorte, Ind., who was working on a bottled water facility in Baghdad when he was kidnapped on April 11, 2005. Two days later, he was seen on a hostage video in which his captors demanded $2 million for his release. After three weeks of negotiations, the kidnappers cut off all communication.

For loved ones back home, the process is both frustrating and heartbreaking. Gross' health has deteriorated during his ordeal and his wife fears he could die in a Cuban jail. Lawmakers, rabbis and activist groups have pressed the State Department, which handles relations with Cuba through Switzerland, on Gross' behalf.

“I don’t hear from the State Department or the White House,” Judy Gross told FoxNews.com. “So that leads me to believe that nothing is being done. We’re supposedly the world’s strong nation and we can’t get this poor, sick 65-year-old man -- who was there working for the U.S. -- out of jail?”

Last December, Gross made his own plea, in a letter to President Obama.

"With the utmost respect, Mr. President, I fear that my government -- the very government I was serving when I began this nightmare -- has abandoned me," wrote Gross. "Officials in your administration have expressed sympathy and called for my unconditional release, and I very much appreciate that. But it has not brought me home."