Can US bear the burden of the tide of illegal immigration?

Under the Trump administration, the U.S. is leading the charge in pushing back against the U.N.’s migration agenda -- a move that is picking up support from other countries and giving political cover to those seeking to join them.

The Trump administration announced last December that it would withdraw from the U.N.'s Global Migration Compact -- due to be adopted by an intergovernmental conference in Morocco next month. Then-Secretary of State Rex Tillerson argued last year that the compact could undermine America's right to enforce its immigration laws and secure its borders.

“The United States supports international cooperation on migration issues, but it is the primary responsibility of sovereign states to help ensure that migration is safe, orderly, and legal,” Tillerson said.

The U.S. was the first country to withdraw, but it was soon followed by a stream of other countries pulling out of the non-binding compact, officially called the “Global Compact for Safe, Orderly and Regular Migration.” Hungary, Poland, Austria, Australia and Israel have all since announced they will not sign the accord, citing concerns that it will limit the ability of countries to set and enforce their own immigration policies.

“We are committed to guarding our borders against illegal migrants,” Israel’s Prime Minister Benjamin Netanyahu said this week. “This is what we have done and this is what we will continue to do."

"We believe that the Compact is inconsistent with our well-established policies and not in Australia’s interest," Australian Prime Minister Scott Morrison said in a statement this week. "The Compact fails to adequately distinguish between people who enter Australia illegally and those who come to Australia the right way, particularly with respect to the provision of welfare and other benefits."

“The Compact allows enormous flexibility for countries to use the parts of the compact that can be adapted to their sovereign decisions and existing legal frameworks…it is a cooperation instrument,” she said at a press conference this week.

The accord consists of 23 objectives for managing migration at "local, national, regional and global levels." But many of those aims are vague, including objectives like: "enhance availability and flexibility of pathways for regular migration" and "address and reduce vulnerabilities in migration."

James Jay Carafano, a national security analyst at the Heritage Foundation, told Fox News that the U.S. is right to be skeptical of global compacts that may seek to establish broad global norms, like a right to migrate, in part because they can encourage further dangerous migration and international instability.

“I think it’s actually a courageous act of American leadership where America is not just looking out for itself for but the world as a whole,” he said.

Carafano pointed to the recent migrant caravan moving through Honduras and Guatemala, and through Mexico toward the U.S., which the Trump administration has been eager to block from entering the U.S., and also forced migrations out of countries such as Syria and Libya.

“Now people want to create a right for anyone to have a right to global migration, which could create all kinds of problems,” he said.

Just as back in Washington, President Trump is calling for action against the incoming migrant caravan, at the U.N, the U.S. is expressing concern about the direction of a separate global compact -- this time on refugees, over fears it too could infringe on a government’s sovereignty to control its own borders.

“The United States believes it is the primary responsibility of sovereign states to ensure that migration is managed consistent with each nation’s domestic laws and policies, and its international obligations,” a U.S. official told Fox News. “A government’s first duty is to its citizens – to serve their needs, to ensure their safety, to preserve their rights, and to defend their values.”

The U.S. last week voted against an annual draft U.N. General Assembly resolution on the U.N.’s refugee agency (UNHCR), saying that while it supports the UNHCR and “much of what is contained” in the Global Compact on Refugees, it also has concerns that need to be addressed.

Economic and Social Council (ECOSOC) U.S. Ambassador Kelley Currie told the body that the resolution contained elements “that run directly counter to my government’s sovereign interests.” Specifically she pointed to a number of paragraphs, including one that spoke of the “need” to limit the detention of asylum seekers.

“We will detain and prosecute those who enter U.S. territory illegally, consistent with our domestic immigration laws and our international interests,” she said.

Currie also said the U.S. “cannot accept” language that “affirms” the compact and “calls upon” states to implement the refugee compact. Currie said that it is the U.S.’ understanding that the compact is non-binding and none of the compact’s provisions “create or affect rights or obligations of states under international law, or otherwise change the current state of conventional or customary international law.”

UNHCR says that the compact "aims to strengthen the international response to large movements of refugees and protracted refugee situations" by objectives such as enhancing refugee self-reliance, easing pressure on host countries, and supporting condition in countries of origin for return.

Brett Schaefer, a U.N. expert at the Heritage Foundation, said that the approach from the U.S. is expressing widely-held fears that non-binding compacts are a step toward creating additional norms and eventually a binding one-size-fits-all global agreement down the line.

“Every country has to deal with these complex political issues as best fits them and having a top-down, one-size-fits-all, U.N.-led process might not be appropriate for all countries and that's the case for United States,” he told Fox News. 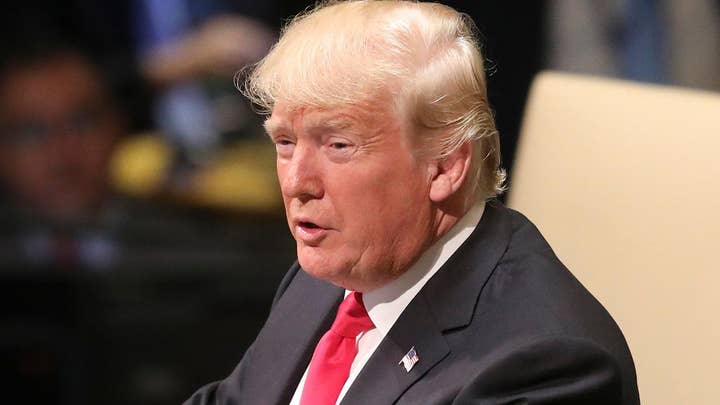 This attitude was demonstrated clearly by President Trump, when he spoke to the U.N. General Assembly in September and made the U.S. commitment to control over its borders clear -- and justified the U.S.’s withdrawal from the migration compact.

“We recognize the right of every nation in this room to set its own immigration policy in accordance with its national interests, just as we ask other countries to respect our own right to do the same — which we are doing,” he said.

“Migration should not be governed by an international body unaccountable to our own citizens,” he added.