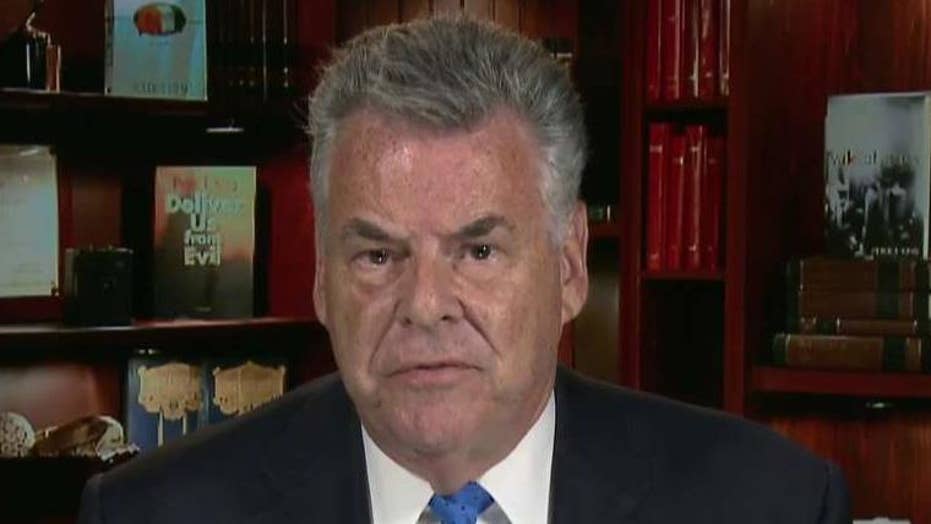 Rep. King: We don't have the full picture on Saudi Arabia

The U.S. government on Friday released a once-secret chapter from a congressional report on the 9/11 attacks that addresses Saudi connections to some of the hijackers, a move sure to recharge speculation over what -- if anything -- Saudi government officials knew.

Under wraps for 13 years, the report contains numerous redactions but states some hijackers "were in contact with, and received support or assistance from, individuals who may be connected to the Saudi Government."

The documents were posted Friday by the House intelligence committee, after being declassified.

The report questioned whether Saudis who were in contact with the hijackers after they arrived in the U.S. knew what they were planning. The document -- known as the so-called "28 pages" -- names people the hijackers associated with before they carried out the attacks. It identifies individuals who helped the hijackers get apartments, open bank accounts, attend local mosques and get flight lessons.

The document says Omar al-Bayoumi, a Saudi national who helped two of the hijackers in California, was suspected of being a Saudi intelligence officer. The 9/11 Commission report found him to be an "unlikely candidate for clandestine involvement" with Islamic extremists. The new document says that according to FBI files, al-Bayoumi had "extensive contact with Saudi government establishments in the United States and received financial support from a Saudi company affiliated with the Saudi Ministry of Defense. ... That company reportedly had ties to Osama bin Laden and al-Qaida," which orchestrated the attacks.

The office of the Director of National Intelligence on Friday also released part of a 2005 FBI-CIA memo that said "there is no information to indicate that either (Bayoumi) or (Bassnan) materially supported the hijackers wittingly, were intelligence officers of the Saudi government or provided material support for the 11 September attacks, contrary to media speculation."

There also is stinging criticism of the intelligence community and previous administrations for not taking the “issue” of Saudi ties to terror groups seriously.

One of the reasons for the “limited understanding” of the extent of Saudi Arabia’s support and financing of terror groups, the report said, was a reluctance to investigate them “due to Saudi Arabia’s status as an American ‘ally.’”

“It should be clear that this Joint Inquiry has made no final determination as to the reliability or sufficiency of the information,” said the report, adding that extensive investigation was outside the committee’s mission.

Rep. Devin Nunes, R-Calif., chairman of the House Permanent Select Committee on Intelligence, expressed support for the decision to release the previously classified material but noted “that this section does not put forward vetted conclusions, but rather unverified leads that were later fully investigated by the Intelligence Community.”

Intelligence Committee Ranking Member Adam Schiff, D-Calif., applauded the disclosure but acknowledged it would not end the years of debate about the role of Saudi Arabia preceding the 9/11 attacks.

“I know that the release of these pages will not end debate over the issue, but it will quiet rumors over their contents – as is often the case, the reality is less damaging than the uncertainty,” said Schiff.

Later investigations found no evidence that the Saudi government or senior Saudi officials knowingly supported those who orchestrated the attacks. But lawmakers and relatives of victims, who don't think all Saudi links to the attackers were thoroughly investigated, campaigned for more than 13 years to get the final chapter of the 2002 congressional inquiry released.

President Obama later ordered a declassification review of the chapter, which Congress released on Friday.

The congressional panel that compiled the report was made up of bipartisan members of the Senate and House intelligence committees. The separate 9/11 commission released the findings of its investigation two years later.

Until now, the classified documents have remained in a secure basement room at the Capitol for the last 14 years – and the subject of intense debate.

Those who argued for their release believed the pages would shed light on the dark relationship between Saudi Arabia and terrorism.

Of the 19 who carried out the 9/11 attacks, 15 were Saudi citizens; the government has long had a complicated relationship with terrorists and terror organizations.

Saying it would clear up “any lingering suspicions” about its role in the attacks, the government of Saudi Arabia supported calls for the release of the secret pages.

“Since 2002, the 9/11 Commission and several government agencies, including the CIA and the FBI, have investigated the contents of the ‘28 Pages’ and have confirmed that neither the Saudi government, nor senior Saudi officials, nor any person acting on behalf of the Saudi government provided any support or encouragement for these attacks,” Saudi Ambassador to the United States Abdullah Al-Saud said in a statement.

It was clear, however, that the Saudis were less than cooperative with investigators following the attacks. One FBI official described post-Sept. 11, 2001 investigation in which he provided the Saudis with copies of individuals’ passports and they responded that “they had no record of the subjects.”

White House spokesman Josh Earnest told reporters the release of the pages “does not change the assessment of the U.S. government that there’s no evidence the Saudi government as an institution or senior Saudi officials funded Al Qaeda.”

In June 2015, Republican Sen. Rand Paul of Kentucky joined with Oregon Democratic Sen. Ron Wyden to introduce a bill requiring President Obama to declassify and make available to the public the redacted 28 pages.

Former Florida Sen. Bob Graham, the former chairman of the Senate Select Committee on Intelligence and co-chair of the bipartisan joint congressional inquiry, recently told "60 Minutes" he believed the hijackers had connections and support from the Saudi government, as well as wealthy individuals and charities.

This past June, the CIA's Office of the Inspector General released a report on its own internal investigation. The inquiry, which concluded in 2005, was said to be inconclusive and found no evidence the Saudi government knowingly and willingly supported Al Qaeda terrorists.

Under increasing pressure from the victims' families and lawmakers, Obama said in April his administration would declassify the pages.