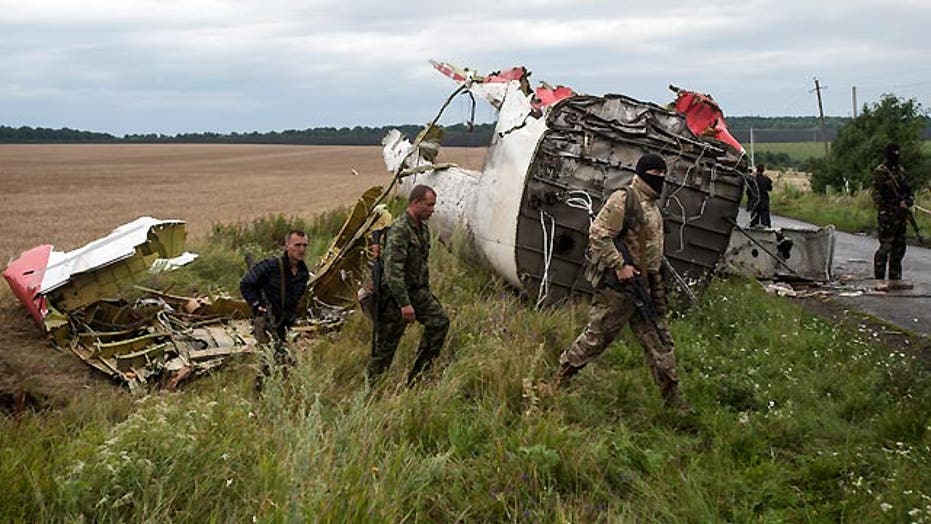 The Wall Street Journal first reported Saturday that U.S. officials suspect that the SA-11 antiaircraft systems were smuggled into Ukraine along with other military equipment, including tanks. The Journal also reported that officials believe the systems were moved back into Russia following Thursday's crash, buttressing speculation that the Russians were attempting to remove evidence of their involvement in the tragedy.

The officials told Fox News that President Barack Obama received "multiple" intelligence assessments regarding the crash of Flight MH17 at Camp David, where he is spending the weekend. The president's national security aides also held several meetings to discuss the situation in Ukraine, where separatists are reportedly limiting international investigators' access to the crash site.

Secretary of State John Kerry will appear on all five Sunday morning talk shows, including "Fox News Sunday," and is expected to aggressively pin the blame on Russia for the downed airliner. Kerry is also expected to call for investigators to have "unfettered access" to the crash site, restating a message he delivered to Russian Foreign Minister Sergey Lavrov when the two spoke Saturday.

Girkin, whose nom de guerre means “shooter” in Russian, is the Russian commander who has overseen the uprising of ethnic Russians in eastern Ukraine over roughly the past four months.

Girkin is a retired Russian military intelligence officer who purportedly served in the Russian FSB, the country’s internal security unit -- a part of the KGB that was renamed after the Soviet Union fell apart.

U.S. officials think Girkin oversaw the missile strike in part because of social media posts he made shortly after the Malaysian plane went down. And they have an intercepted phone conversation purportedly between a Girkin lieutenant and a handler in the Russian military intelligence service in which the fighter seems to say his team shot down the plane.

Girkin purportedly posted online: “Near (Snizhne) right now was hit an airplane An-26.”

“It is somewhere behind the mine ‘Progress,’ ” Girkin added.

Girkin previously served in Chechnya to put down an uprising against Moscow and led the Russian incursion into Crimea, in eastern Ukraine, earlier this year.

About five weeks ago, Girkin, who is not a Ukrainian, reportedly sought help from Moscow because he said the local ethnic Russians in Ukraine did not want to fight.

Girkin’s apparent involvement would be further evidence that the Russians sent agents provocateurs into eastern Ukraine to start the so-called “separatist movement.”

Russian President Vladimir Putin said Friday that Ukraine was responsible for the downing of the passenger plane because the country's central government had renewed its military campaign against the separatists.

Western intelligence sources say that referring to the crisis in Ukraine, which followed residents in February ousting President Viktor Yanukovich, as a “civil war” is misleading because it is purely manufactured from Moscow.