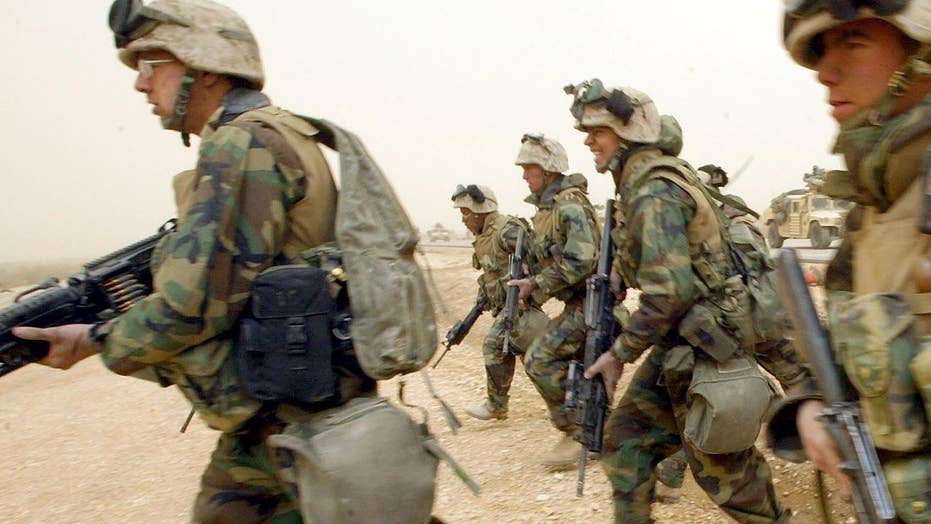 How major escalation of US troops will change ISIS fight

The U.S. is sending more special operations forces to help Iraqi and Kurdish forces battling ISIS, as well as capture or kill senior leaders of the terror network in Iraq and Syria.

A U.S. official told Fox News that approximately 200 troops would be sent to Iraq within the next few weeks part of a "specialized expeditionary targeting force" announced by Defense Secretary Ash Carter in testimony before the House Armed Services Committee Tuesday.

The official said the force's remit would include targeted assassinations of senior ISIS if their specific mission requires. A second U.S. official told Fox News that capturing senior ISIS leaders would also be an important component of the new assault force’s mission to learn more about the group's structure and any affiliates.

"This intel gathering mission is just as important, if not more important, than killing bad guys," said the official, who added that the number of troops "could grow" beyond 200.

The U.S. military conducted similar operations in Iraq to take out senior Al Qaeda leadership, such as the mission led by Gen. Stanley McChrystal which killed Al Qaeda in Iraq leader Abu Musab al-Zarqawi in June 2006.

More recently, U.S. special operations troops and Iraqi forces raided a compound in northern Iraq in October, freeing about 70 Iraqi prisoners who were facing execution. One U.S. service member was killed in the raid, the first American combat death in Iraq since the U.S. began its campaign against ISIS in August 2014.

In May, a Delta Force raid in Syria killed ISIS financier Abu Sayyaf, yielding intelligence about the group's structure and finances. His wife, held in Iraq, has been cooperating with interrogators.

Iraqi Prime Minister Haider Al-Abadi reacted to Carter's announcement with a statement saying in part, "there is no need for foreign ground combat troops" in Iraq.

Abadi's statement did call for more weapons, training and support for Iraq's military from Baghdad's international partners. He also warned that any special operations against ISIS in Iraq "can only be deployed subject to the approval of the Iraqi Government and in coordination with the Iraqi forces and with full respect to Iraqi sovereignty."

In Brussels Wednesday, Secretary of State John Kerry told reporters Iraq's government was briefed in advance of the U.S. announcement. He said Washington would work with Baghdad on what types of forces were deployed, where they would go and what types of missions they would conduct. He expressed "full and total respect" for al-Abadi's leadership, and said plans would go forward "in full consultation and with full consent of the Iraqi government."

"The raids in Iraq will be done at the invitation of the Iraqi government and focused on defending its borders and building the Iraqi security force's own capacity," Carter said in his testimony Tuesday. "This force will also be in a position to conduct unilateral operations into Syria."

"This is an important capability because it takes advantage of what we're good at," Carter added later. "We're good at intelligence, we're good at mobility, we're good at surprise. We have the long reach that no one else has. And it puts everybody on notice in Syria. You don't know at night who's going to be coming in the window. And that's the sensation that we want all of ISIL's leadership and followers to have."

A U.S. official familiar with the composition of special operations forces told Fox News that approximately 75 percent of the group bound for Iraq would provide support. The force includes intelligence personnel, aircraft pilots, and mechanics in addition to a quick reaction force. The official added that the group was separate from the 50 special operations forces that will be sent to Syria.

At the same hearing, Gen. Joseph Dunford, chairman of the Joint Chiefs of Staff, raised eyebrows when he said that ISIS had not been contained by the U.S.-led coalition, contrary to President Obama's assessment earlier this month.

"What is true is that from the start our goal has been first to contain, and we have contained them. They have not gained ground in Iraq. And in Syria, they'll come in, they'll leave, but you don't see this systematic march by ISIL across the terrain," Obama said in an interview with ABC, using another acronym for the group.

The remarks were aired a day before ISIS militants carried out a series of coordinated attacks in Paris, killing 130 people and injuring more than 350 others.

"We have not contained ISIL currently," Dunford said in response to a question from Rep. Randy Forbes, R-Va.