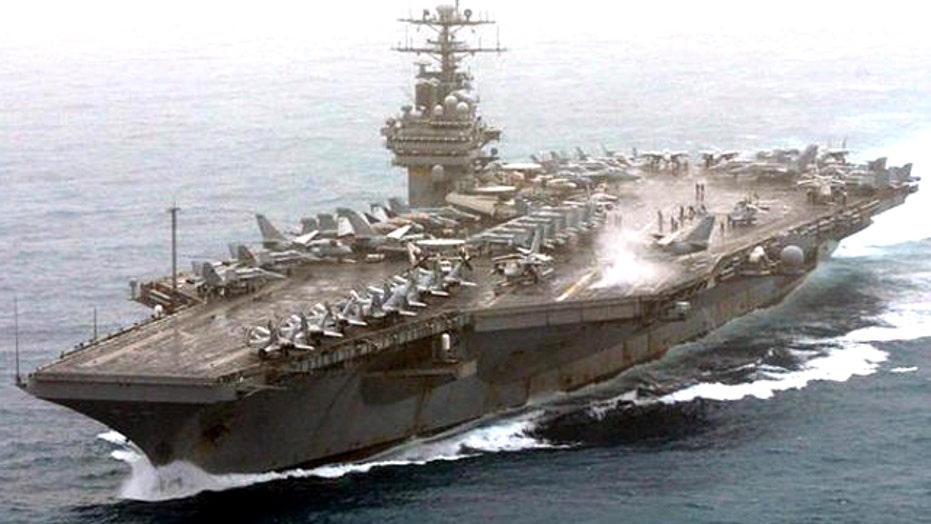 US sends warship to Yemen: What happens next?

A U.S. aircraft carrier was dispatched to the waters off Yemen Monday to join other American ships prepared to block any Iranian weapons shipments to Shiite Houthi rebels fighting in Yemen.

A Navy official confirmed to Fox News that the USS Theodore Roosevelt -- along with her escort ship, the USS Normandy, a guided-missile cruiser -- left the Persian Gulf on Sunday en route for the Arabian Sea, to help enforce the blockade. A massive ship that carries F/A-18 fighter jets, the Roosevelt is seen more of a deterrent and show of force in the region.

The U.S. Navy has been beefing up its presence in the Gulf of Aden and the southern Arabian Sea amid reports that a convoy of about eight Iranian ships is heading toward Yemen and possibly carrying arms for the Houthis.

The deployment comes after a U.N. Security Council resolution approved last week imposed an arms embargo on rebel leaders. The resolution passed in a 14-0 vote with Russia abstaining.

Tensions are rising in the region even as the U.S. and five other world powers scramble to strike a final deal with Iran on its nuclear program by the end of June. The fighting in Yemen, where U.S. ally Saudi Arabia is leading a coalition of mainly Gulf Arab countries against the Iran-backed rebels, is complicating matters.

Western governments and Sunni Arab countries say the Houthis get their arms from Iran. Tehran and the rebels deny that, although Iran has provided political and humanitarian support to the Shiite group.

The U.S. has been providing logistical and intelligence support to the Saudi-led coalition launching airstrikes against the Houthis. That air campaign is now in its fourth week, and the U.S. has also begun refueling coalition aircraft involved in the conflict.

White House Press Secretary Josh Earnest, without commenting specifically on any Navy movements, said the U.S. has concerns about Iran's "continued support" for the Houthis.

"We have seen evidence that the Iranians are supplying weapons and other armed support to the Houthis in Yemen. That support will only contribute to greater violence in that country," he said. "These are exactly the kind of destabilizing activities that we have in mind when we raise concerns about Iran's destabilizing activities in the Middle East."

He said "the Iranians are acutely aware of our concerns for their continued support of the Houthis by sending them large shipments of weapons."

A written statement from the Navy on Monday said the two ships are joining others in conducting "maritime security operations" in the region.

"In recent days, the U.S. Navy has increased its presence in this area as a result of the current instability in Yemen," the statement said.

"The purpose of these operations is to ensure the vital shipping lanes in the region remain open and safe. The United States remains committed to its regional partners and to maintaining security in the maritime environment."

There are now about nine U.S. Navy ships in the region, including cruisers and destroyers carrying teams that can board and search other vessels, as well as three support ships.

The U.S. Navy generally conducts consensual boardings of ships when needed, including to combat piracy around Africa and the region. So far, however, U.S. naval personnel have not boarded any Iranian vessels since the Yemen conflict began.

Officials said it's too soon to speculate on what the Navy ships may do as the Iranian convoy approaches, including whether Iran would consent to a boarding request, and what actions the Navy would take if its request was refused.