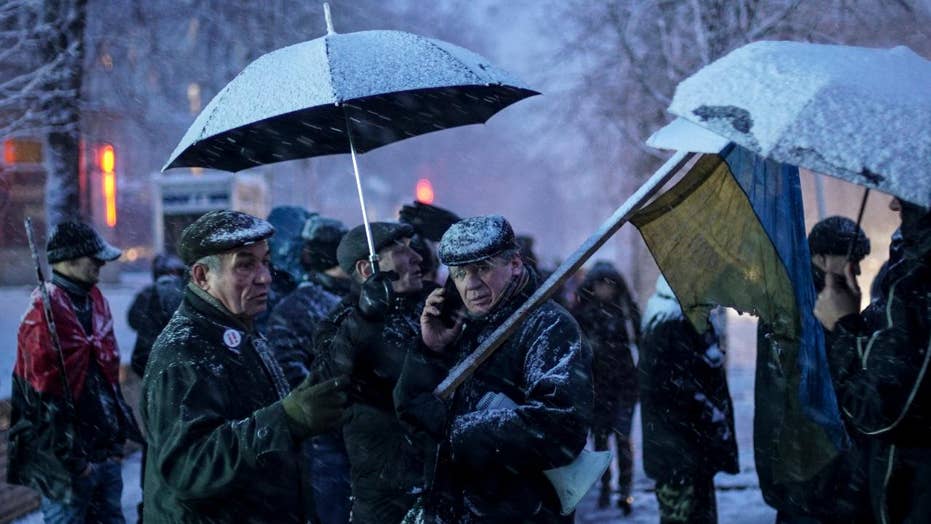 US approves export license for arms sales to Ukraine

The Trump administration approved the sale of the lethal weapons for use against pro-Russian separatists; Lucas Tomlinson has the story for 'Special Report.'

WASHINGTON – The Trump administration has approved a plan to provide lethal weapons to Ukraine, U.S. officials said Friday, aiming to fortify the former Soviet republic military as it fights separatists backed by Russia.

The new arms include American-made Javelin anti-tank missiles that Ukraine has long sought to boost its defenses against tanks that have rolled through eastern Ukraine during violence that has killed more than 10,000 since 2014. Previously, the U.S. has provided Ukraine with support equipment and training, and has let private companies sell some small arms like rifles.

The officials describing the plan weren't authorized to discuss it publicly and demanded anonymity.

The move is likely to escalate tensions between the United States and Russia, as President Donald Trump contends with ongoing questions about whether he's too hesitant to confront the Kremlin. Ukraine accuses Russia of sending the tanks, and the U.S. says Moscow is arming, training and fighting alongside the separatists.

Trump had been considering the plan for some time after the State Department and the Pentagon signed off earlier this year. President Barack Obama also considered sending lethal weapons to Ukraine.

The State Department, responsible for overseeing foreign military sales, would not confirm that anti-tank missiles or other lethal weapons would be sent. But in a statement late Friday, State Department spokeswoman Heather Nauert said the U.S. had decided to provide "enhanced defensive capabilities" to help Ukraine build its military long-term, defend its sovereignty and "deter further aggression."

"U.S. assistance is entirely defensive in nature, and as we have always said, Ukraine is a sovereign country and has a right to defend itself," Nauert said.

Although the portable Javelin anti-tank missiles can kill, proponents for granting them to Ukraine have long argued they are considered "defensive" because the Ukrainians would use them to defend their territory and deter the Russians, not to attack a foreign country or seize new territory.

Under law, the State Department must tell Congress of planned foreign military sales, triggering a review period in which lawmakers can act to stop the sale. It was unclear whether the administration had formally notified Congress, but lawmakers are unlikely to try to block it given that Democrats and Republicans alike have long called on the government to take the step.