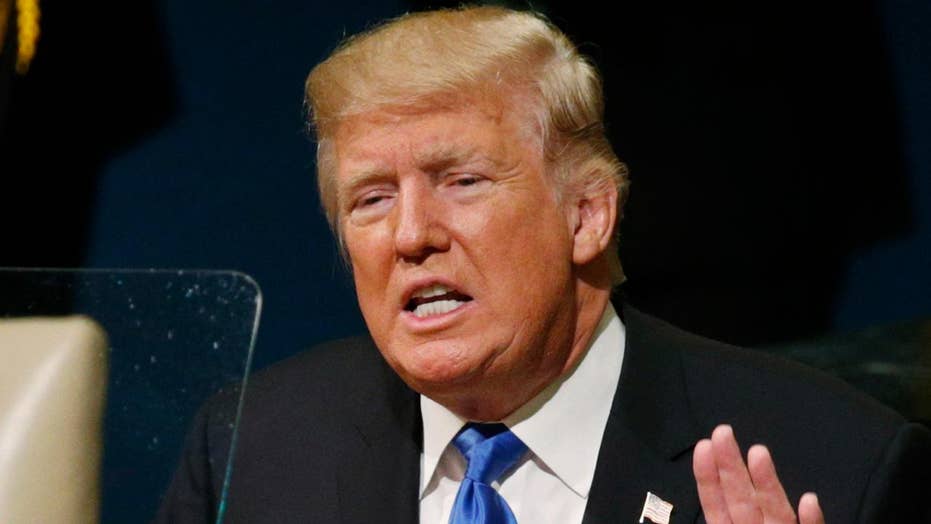 President Trump, in his first speech before the United Nations, launched a rhetorical broadside Tuesday at “rogue regimes” including North Korea, Iran and Syria – while pointedly warning Kim Jong Un that the United States will “totally destroy” his country if he does not turn back from the nuclear weapons path.

“The scourge our planet today is a small group of rogue regimes that violate every principle on which the United Nations is based,” Trump told the U.N. General Assembly. “They respect neither their own citizens, nor the sovereign rights of their countries. If the righteous many do not confront the wicked few, then evil will triumph.”

Using his new nickname for North Korea’s dictator, Trump said: "Rocket Man is on a suicide mission for himself and for his regime."

North Korea conducted its longest-ever test flight of a ballistic missile Friday, sending an intermediate-range weapon hurtling over U.S. ally Japan into the northern Pacific Ocean in a launch that signals both defiance of its rivals and a big technological advance.

“The United States has great strength and patience,” the president told the U.N. “But if it is forced to defend itself or its allies, we will have no choice but to totally destroy North Korea.”

Trump also singled out Iran, calling it “another reckless regime, one that speaks openly of mass murder, vowing death to America, destruction to Israel and ruin for many leaders and nations in this room.”

The president lambasted the Obama administration’s 2015 Iran nuclear deal, in which Iran agreed to curtail its nuclear weapons program in exchange for the easing of economic sanctions.

“The Iran deal was one of the worst and most one sided transactions the United States has ever entered into,” he said. “Frankly, that deal is an embarrassment to the United States and I don’t think you’ve heard the last of it, believe me.”

The president called for the de-escalation of the Syrian conflict and a “political solution that honors the will of the Syrian people.”

“The actions of the criminal regime of Bashar al-Assad, including the use of chemical weapons, against his own citizens, even innocent children, shock the conscience of every decent person,” he said.

Addressing Islamic extremism, Trump said the United States has made “big gains” toward the lasting defeat of the Islamic State in Syria and Iraq.

“We will stop radical Islamic terrorism because we cannot allow it to tear up our nation and indeed to tear up the entire world,” Trump said. “We must deny the terrorists safe haven, transit funding and any form of support for the vile and sinister ideology.”

As a candidate, Trump labeled the U.N. as weak and incompetent, and suggested that the body did not act as a friend of either the United States or Israel, but has since softened his tone.

“Just as the founders as this body intended, we must work together and confront together those who threaten us with chaos, turmoil and terror,” he said.

But Trump reiterated his “America first” foreign policy pledge from the presidential campaign during his speech on Tuesday.

He added: “The United States will forever be a great friend to the world and especially to its allies. But we can no longer be taken advantage of or enter into a one-sided deal where the United States gets nothing in return.”