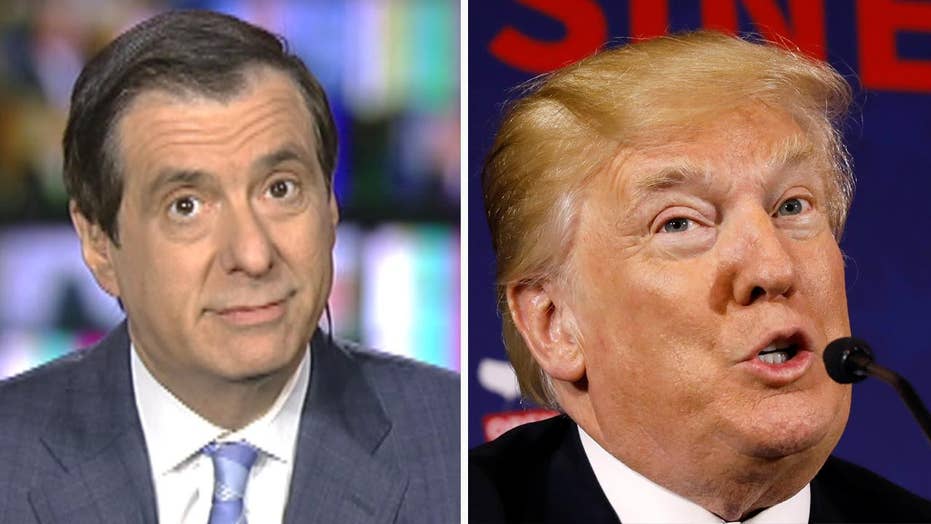 Kurtz: Trump’s decisions are final - until they’re not

'MediaBuzz' host Howard Kurtz weighs in on President Trump's process of making bold announcements on Twitter even though his staff might be unaware. Could this just be a shrewd negotiating tactic?

President Trump has been making some dramatic moves lately, leaving his out-of-the-loop aides scrambling to either catch up or change his mind.

And the mainstream media take is clear: This is a crazy way to run a government!

Well, it can certainly be erratic. But I'm going to float a theory that perhaps there's a method to the madness.

First, let's look at the dizzying pace of action. Just the other day, the president stunned his staff by saying at a news conference that he wanted to pull U.S. troops out of Syria. But after consulting with Pentagon chief Jim Mattis and others—in what CNN says was a testy meeting--he agreed to hold off for now.

The White House was also caught off guard when Trump invited Vladimir Putin to the White House—only to have the Russians leak the news. And even his secretary of State—the now-departed Rex Tillerson—didn't know about his offer to meet with Kim Jong-un.

Nor, for that matter, did most of Trump’s inner circle know he was going to hire John Bolton and Larry Kudlow.

The "DACA is dead" tweet, seemingly out of nowhere, cast a shadow on the stalled congressional efforts to strike a deal on immigration.

And then there are the tariffs, announced over Gary Cohn’s objections, which have prompted retaliation by China and sparked heavy losses in the stock market.

But then Kudlow seemed to tap on the brakes, telling Bloomberg: "None of the tariffs have been put in place yet, these are all proposals. We’re putting it out for comment."

Now Washington has never seen a president operate like this. This seat-of-the-pants style makes him hard to cover, hard to work for and hard to negotiate with.

But here's the contrarian view: Trump is extremely frustrated with the slow pace of government. Having rid himself of some of his more cautious aides, he's more determined than ever to trust his instincts and shake things up.

And he does this by announcing, or tweeting, "decisions" that land with explosive impact in the media and political world. That forces everyone else to react. He moves the debate onto his turf.

The tariffs aren't final. The Syrian pullout is delayed. Maybe DACA isn't dead. And who knows if the Kim meeting will actually come off?

In other words, Trump's pronouncements are actually just a negotiating position, as he would do as a Manhattan businessman. He dominates the media coverage, which he loves, and then the details are worked out—or not.

But the media are far more critical. Axios' Mike Allen says that "checks are being ignored or have been eliminated, and critics purged as the president is filling time by watching Fox, and by eating dinner with people who feed his ego and conspiracy theories, and who drink in his rants ...

"Trump's closest confidants speak with an unusual level of concern, even alarm, and admit to being confused about what the president will do next — and why."

The Washington Post says Trump's campaign promises are colliding with the complexities of governing, "creating backlash among allies, frustrating supporters and threatening the pocketbooks of many farming communities that helped get him elected."

And even among Trump's own allies, the paper says, "immigration hawks have been infuriated by his inability to build the border wall with funding from either Mexico or U.S. taxpayers. Many military leaders and foreign policy strategists have been alarmed by his promise to remove troops from Syria. And Republicans on Capitol Hill have protested the rising signs of a trade war with China."

Maybe Trump's shoot-first style will ultimately pan out and maybe it won't. But given the Beltway's bureaucratic obstacles, it's not as crazy as it seems.