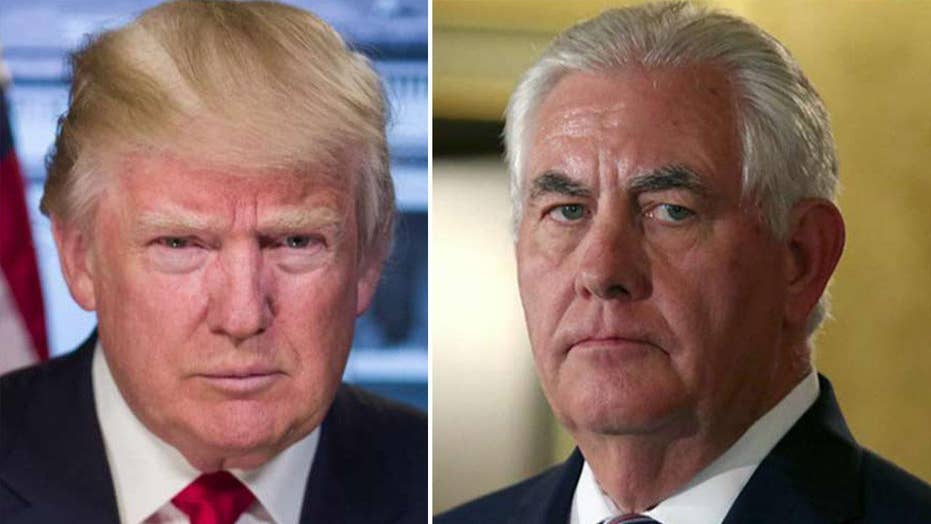 President Trump fires back at Rex Tillerson after the former secretary of state claimed the president doesn't like to read, is undisciplined; chief White House correspondent John Roberts reports.

In his second year in office, President Trump has shown little interest in dialing back his use of Twitter as a political weapon against his critics.

Those on the receiving end of his Twitter barbs this past year ranged from Democratic lawmakers to possible 2020 challengers to former confidants and top administration officials — with Trump often giving them the sort of derisive nicknames he dished out during his presidential campaign.

Read on for a look at five particularly blistering Trump tweets from 2018.

After former Secretary of State Rex Tillerson claimed he often had to remind Trump some of his plans would “violate the law,” the president took to social media to blast his former top diplomat.

Tillerson “didn’t have the mental capacity needed” to lead the State Department, Trump tweeted, adding: “He was dumb as a rock and I couldn’t get rid of him fast enough. He was lazy as hell.”

The rebuke followed a rare public appearance in December — about eight months after he was ousted as secretary of state — in which Tillerson blamed his strained relationship with Trump on a lack of a “common value system” between the men.

Trump and former Vice President Joe Biden — considered to be a potential 2020 presidential contender — sparred verbally earlier this year, but took it a step further by trash-talking about who would win in a fight.

Biden kicked off the war of words when he told a group of college Democrats that he would have taken Trump “behind the gym and beat[en] the hell out of him” in high school. Trump, in turn, fired back on social media.

“Crazy Joe Biden is trying to act like a tough guy. Actually, he is weak, both mentally and physically, and yet he threatens me, for the second time, with physical assault,” Trump said. “He doesn’t know me, but he would go down fast and hard, crying all the way. Don’t threaten people, Joe!”

Trump blasted Sen. Richard Blumenthal in a pair of December tweets, dubbing the Connecticut Democrat “Da Nang Dick” -- a swipe at his exaggerated statements of military service during the Vietnam War.

“Watched Da Nang Dick Blumenthal on television spewing facts almost as accurate as his bravery in Vietnam (which he never saw). As the bullets whizzed by Da Nang Dick’s head, as he was saving soldiers left and right, he then woke up from his dream screaming that HE LIED,” Trump tweeted. “Next time I go to Vietnam I will ask ‘the Dick’ to travel with me!”

Trump’s comments came after Blumenthal speculated on MSNBC that Trump “committed a felony that enabled him or at least helped him to become president” with payments to two women who claimed to have relationships with Trump in exchange for their silence.

Blumenthal was widely criticized when he ran for Senate in 2010 for past comments he made saying he “served in Vietnam.” Blumenthal actually received five draft deferments so he could continue his Harvard education and avoided being deployed to Vietnam, according to The New York Times.  He eventually served stateside in the U.S. Marine Corps Reserves.

Omarosa Manigault-Newman's betrayal of the Trump administration may have been the least surprising plot twist of 2018. But after the former White House aide and “Apprentice” star released a tell-all book revealing she secretly recorded people in the White House, Trump was unsparing.

“When you give a crazed, crying lowlife a break, and give her a job at the White House, I guess it just didn’t work out. Good work by [White House chief of staff John] Kelly for quickly firing that dog!” Trump tweeted in August.

He previously referred to her as “Wacky Omarosa” who “never made it [and] never will.”

“People in the White House hated her. She was vicious, but not smart,” Trump said.

As Michael Cohen moved to cooperate with Special Counsel Robert Mueller’s Russia investigation — and in doing so, turned on the president — Trump openly attacked his former attorney on Twitter.

“If anyone is looking for a good lawyer, I would suggest that you don’t retain the services of Michael Cohen,” Trump said in an August tweet.

Cohen has admitted to lying to Congress about the nature of a since-abandoned real estate plan for a Trump Tower in Moscow. He said he made the false statements “to keep up with political messaging and out of loyalty.” He was recently sentenced to three years in prison for a range of other crimes including tax fraud and campaign-finance violations -- he implicated Trump in the latter.

Mueller has made it clear that Cohen has cooperated with the special counsel’s probe, saying he provided “useful information,” though it’s not clear what else Cohen has divulged.