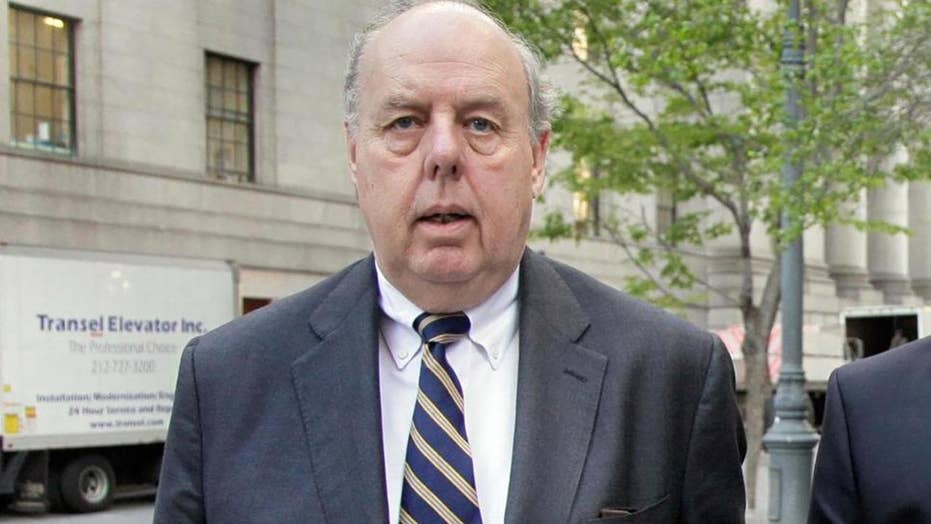 Trump's attorney calls for the Russia investigation to end

John Dowd, Trump's personal attorney, issued a statement to Fox News calling on Rod Rosenstein to bring the Russia collusion investigation to an end following the firing of Andrew McCabe.

“I pray that Acting Attorney General Rosenstein will follow the brilliant and courageous example of the FBI Office of Professional Responsibility and Attorney General Jeff Sessions and bring an end to alleged Russia Collusion investigation manufactured by McCabe’s boss James Comey based upon a fraudulent and corrupt Dossier,” he said in a statement to Fox News.

“Just end it on the merits in light of recent revelations,” he added. Dowd's comments were first reported by The Daily Beast.

Rosenstein is overseeing the probe after Attorney General Jeff Sessions recused himself from any investigation related to Russia and the Trump campaign. Dowd said he made the remarks in his personal capacity and not on behalf of the president.

Senate Minority Leader Chuck Schumer, D-NY, said the remarks showed that Trump's team is looking "not to cooperate with Special Counsel Mueller, but to undermine him at every turn."

"The president, the administration, and his legal team must not take any steps to curtail, interfere with, or end the special counsel's investigation or there will be severe consequences from both Democrats and Republicans," Schumer said in a statement.

Carl Tobias, a law professor at the University of Richmond, told Fox News that Dowd's remarks seem like a new phase in the Trump team's attitude to the Mueller probe.

"It also seems important that the timing coincides with McCabe’s firing, so we can probably expect that there will be increasing pressure on [Rosenstein] to end the Mueller inquiry, although McCabe’s actions were only tangentially related to Mueller’s work," he said.

Sessions fired McCabe late Friday after a yet-unpublished IG report found that he made an unauthorized leak to the media and then "lacked candor" when speaking about its investigators. McCabe was fired just days before he would have been eligible for a lifetime pension

Sessions’ decision to fire McCabe came as Justice Department Inspector General Michael Horowitz concluded a bureau oversight investigation, with a report expected to be critical of McCabe’s handling of the Hillary Clinton email probe, his handling of the bureau during the early months of the Russia investigation, and his ties to the Democratic Party.

Horowitz determined that McCabe hadn't been forthcoming regarding the handling of the FBI’s probe into Clinton’s use of a private email server while she was secretary of state in the Obama administration.

The inspector general’s finding triggered an FBI disciplinary process that recommended McCabe’s firing. Sources told Fox News that the FBI’s Office of Professional Responsibility made the recommendation to fire McCabe. Sessions had the option to either accept the recommendation, or step in to stop the firing process.

Trump hailed the firing as a "great day for the hard working men and women of the FBI" in a tweet early Saturday.

McCabe hit back at the move in a statement Friday, calling his firing part of an "ongoing war at the FBI."

"This attack on my credibility is one part of a larger effort not just to slander me personally, but to taint the FBI, law enforcement, and intelligence professionals more generally," McCabe said. "It is part of this Administration’s ongoing war on the FBI and the efforts of the Special Counsel investigation, which continue to this day. Their persistence in this campaign only highlights the importance of the Special Counsel’s work."