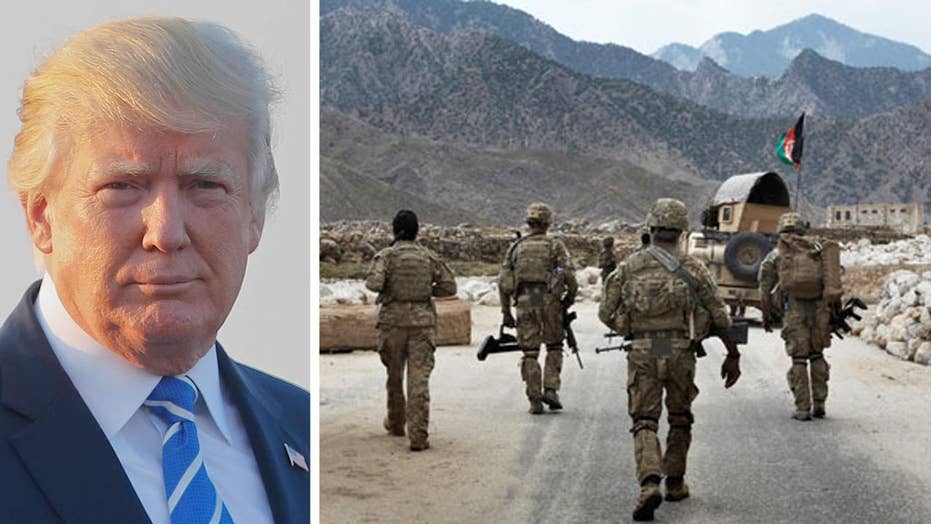 President Trump to address the nation on Afghanistan

In an address to the nation Monday night, President Trump is expected to reveal his strategy in Afghanistan – and America’s longest war.

Trump’s speech comes after he huddled with his top national security aides Friday at Camp David, the secluded military retreat outside of Washington, D.C. The president tweeted on Saturday that “many decisions” were made at Camp David, “including on Afghanistan.”

Trump didn’t offer any clues on social media as to what specific decisions were made pertaining to Afghanistan.

Read on for more information about his Monday address.

What are Trump's options for Afghanistan?

In a statement about the speech, the White House said Trump will “provide an update on the path forward for America’s engagement in Afghanistan and South Asia.”

Trump has several options when it comes to Afghanistan, from withdrawing troops and ending America’s longest war to sending additional military personnel.

TRUMP TO ADDRESS NATION ON AFGHANISTAN

The challenge for Trump – which tested former President Barack Obama as well – is how to continue to fight terrorism and the Taliban while still promoting peace.

The administration’s Afghanistan strategy is expected to be shaped by a review of its approach to the broader region – including Pakistan and India.

Defense Secretary James Mattis, who visited Afghanistan over the weekend, declared himself satisfied with how the administration had formulated its new strategy. But he refused to discuss details before Trump's announcement.

What do other Republicans want?

Among elected leaders in the U.S., opinions are mixed about America's future role in Afghanistan.

“I want our people to be able to come home,” Kasich said during an interview with CNN on Sunday.

Sen. John McCain, chairman of the Armed Services Committee, unveiled his own plan for Afghanistan last week – which would increase ground and air forces in the Middle Eastern country.

He said the U.S. needs to put strict conditions on continued assistance to Afghanistan and require the Kabul government to demonstrate "measurable progress" in curbing corruption, strengthening the rule of law and improving financial transparency.

What about the Pentagon?

The Pentagon months ago settled on a plan to send nearly 4,000 additional troops to aid the Afghan Army. It is awaiting a final announcement from Trump on the proposal.

Ahead of Trump’s speech, Gen. John Nicholson, the top U.S. commander in Afghanistan, hailed the launch of the Afghan Army’s new special operations corps and declared that “we are with you and we will stay with you.”

His comments suggested that the Pentagon may have won its argument that the U.S. military must remain engaged in Afghanistan to ensure terrorists aren’t able to threaten the U.S., according to the Associated Press.

Where can you watch the speech?

Trump will give the address from the Army’s Joint Base Myer-Henderson Hall in the Rosslyn neighborhood of Arlington, Va. The base sits next to Arlington National Cemetery – the final resting place for many U.S. troops who died fighting in Afghanistan and Iraq.

The address is expected to begin at 9 p.m. EDT and can be viewed on the Fox News Channel with special coverage, anchored by Bret Baier and Martha MacCallum, followed by "Hannity" at 10:00pm ET and "The Five" at 11:00pm ET.