President Trump blasted “no talent” comedian Samantha Bee on Friday following her “horrible” comments about Ivanka Trump -- and asked why she hasn't been fired.

The president called it a “total double standard” that TBS hasn't fired the “Full Frontal” host, after ABC ousted Roseanne Barr and cancelled her show over a racist tweet about an Obama official.

“Why aren’t they firing no talent Samantha Bee for the horrible language used on her low ratings show? A total double standard but that’s O.K., we are Winning, and will be doing so for a long time to come!” Trump tweeted on Friday.

The president’s tweet followed Bee’s vulgar comments about his daughter this week. Bee apologized for using an “expletive” to describe her, calling it “inappropriate and inexcusable.”

“I crossed a line, and I deeply regret it,” Bee said Thursday.

TBS issued an apology as well, saying that Bee “has taken the right action in apologizing for the vile and inappropriate language she used about Ivanka Trump,” and that “those words should not have been aired.”

“It was our mistake too, and we regret it,” TBS said in a statement.

Bee made the comments about Ivanka Trump -- and a photo of her and her child -- while slamming the administration's policies toward immigrant families.

“You know Ivanka, that’s a beautiful photo of you and your child, but let me just say, one mother to another, do something about your dad’s immigration practices you feckless c----!” Bee said. “He listens to you! Put on something tight and low cut and tell your father to f----ing stop it. Tell him it was an Obama thing and see how it goes.” 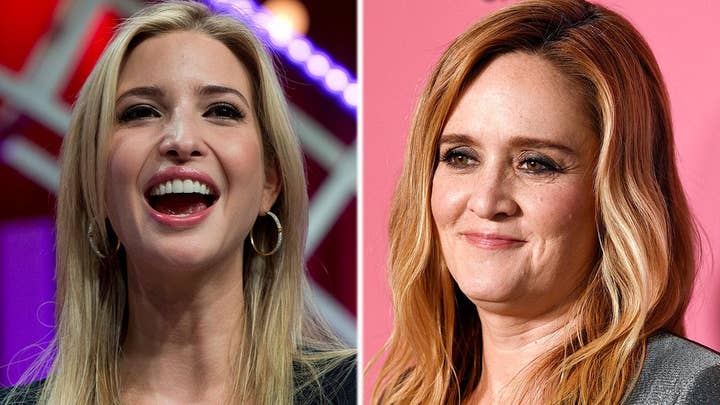 The clip of Bee’s monologue was uploaded to her YouTube channel where the words “c---“ and “f---“ were not censored.

Bee received a special honor from the Television Academy on Thursday for “advancing social change” for her work on the show.

Barr, meanwhile, was canned after tweeting that former Obama aide Valerie Jarrett was like “the muslim brotherhood & planet of the apes had a baby.”

Barr apologized for her comments, blaming her tweets on the sleeping medication, Ambien.

ABC immediately cancelled the reboot of her 1980’s sitcom, “Roseanne,” and CEO of Disney Bob Iger called Jarrett to apologize.

Trump has criticized Iger this week.

“Bob Iger of ABC called Valerie Jarrett to let her know that ‘ABC does not tolerate comments like those’ made by Roseanne Barr. Gee, he never called President Donald J. Trump to apologize for the HORRIBLE statements made and said about me on ABC. Maybe I just didn’t get the call?” Trump tweeted Wednesday.