Pete Buttigieg slams the president's decision to play golf as the storm approaches Florida, the White House insists Trump has been receiving hourly updates on the storm. Kristin Fisher reports from Washington, D.C.

President Trump on Saturday started his weekend with a furious tweet aimed at two Washington Post reporters who he said shouldn’t be allowed on White House grounds after the paper published a report detailing what they described as Trump’s “lost summer.”

The Post angered the White House with an article published this week called “Trump’s lost summer” which outlined what some aides described as a summer “defined by self-inflicted controversies and squandered opportunities.”

Trump took aim at White House reporters Ashley Parker and Philip Rucker, who were the authors of the article.

“The Washington Post’s @PhilipRucker (Mr. Off the Record) & @AshleyRParker, two nasty lightweight reporters, shouldn’t even be allowed on the grounds of the White House because their reporting is so DISGUSTING & FAKE,” he tweeted.

Rucker's new nickname “Mr. Off the Record” appeared to be a reference to claims spread by members of Trump’s circle that he was responsible for repeating off-the-record comments about Trump's family made by former White House aide Madeleine Westerhout. Westerhout resigned last week, reportedly after those comments got back to the White House.

The Post recently backed Rucker over that claim when it first emerged, telling Politico in a statement that Rucker “has always acted with the utmost honor and integrity and has never violated Washington Post standards or policies.” On Saturday, the Post's Executive Editor Martin Baron said the president's tweet was part of an effort to intimidate the press.

“The Washington Post is immensely proud to have these two superb journalists on staff. Philip Rucker and Ashley Parker have consistently demonstrated their integrity in covering the White House," Baron said in a statement. "We stand fully behind them and their important work. The president’s statement fits into a pattern of seeking to denigrate and intimidate the press. It’s unwarranted and dangerous, and it represents a threat to a free press in this country.”

In the tweet, Trump linked to a Washington Examiner op-ed by White House press secretaries Stephanie Grisham and Hogan Gidley that slammed the Post piece as “an offensive, egregious affront to true news journalism.” Their op-ed was called “The Washington Post’s lost summer” and laid out what the White House sees as misteps and errors by the Post. 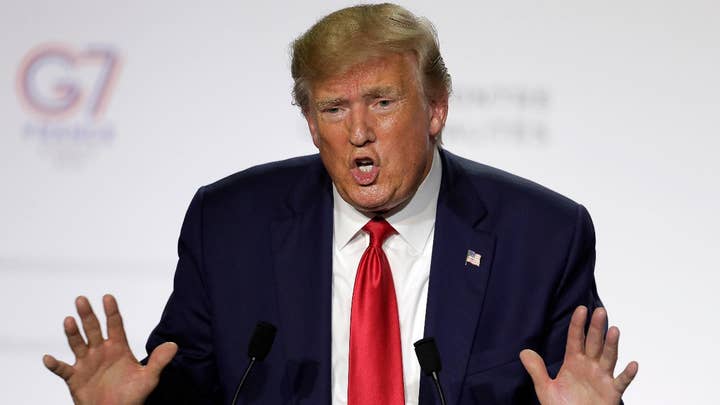 “From Memorial Day to Labor Day, the Post had some pretty embarrassing moments,” Grisham and Gidley wrote. “Whether it was incorrectly stating that presidents do not deliver remarks on the Fourth of July, ignoring speeches by Presidents Reagan, Kennedy, and Obama, or being called out for shoddy, politically motivated fact-checking, the Post’s lost summer culminated with a fateful day in August when it was forced to issue 15 corrections to a single article.”

It also pushed back on the claim that Trump has not scored a number of achievements over the summer.

“The truth is, Trump racked up many well-documented victories that directly benefited the American people at home and abroad," they wrote. "When the Post asked, the White House proudly provided it with a detailed list of the administration’s 26 most important successes of the summer. Of those 26 accomplishments, the Post chose to publish just four, which it buried under 11 paragraphs of editorialized critique."

The Post, however, doesn’t agree with Grisham and Gidley’s op-ed.

“Our story prominently noted the White House’s list of accomplishments and quoted a White House spokesman at length," a Washington Post spokesperson told Fox News on Friday. "It also reported the views of Republicans, both on the record and on background, some of whom are part of the administration and some who watch its performance from a distance. Readers can judge for themselves whether our account fairly represented a variety of perspectives on the president’s summer."

The op-ed received some backlash from critics who pointed out that several of the accomplishments listed by Grisham and Gidley were covered by the paper, but it appears the White House staffers were complaining only about Rucker and Parker’s piece, specifically. It went on to say that the Post ignored 84 percent of Trump’s “actual summer accomplishments.”

Grisham and Gidley added that the Post “wasn’t alone this summer” and mocked The New York Times executive editor Dean Baquet for recently telling staffers to pivot from Russian collusion to a “more head-on story about the president’s character.”