Border Patrol officials appeal to the president for more resources, technology and a border barrier.

President Trump said Friday that the immigration flow along the southern border amounts to an “invasion,” calling the situation “far worse” than people understand after returning from a visit to the front-lines in Texas.

“Humanitarian Crisis at our Southern Border. I just got back and it is a far worse situation than almost anyone would understand, an invasion!” Trump tweeted Friday. “I have been there numerous times –The Democrats, Cryin’ Chuck and Nancy don’t know how bad and dangerous it is for our ENTIRE COUNTRY."

He went on to say past administrations should have built a steel barrier or wall: "They never got it done –I will. Without it, our Country cannot be safe. Criminals, Gangs, Human Traffickers, Drugs & so much other big trouble can easily pour in. It can be stopped cold!"

Unclear, however, is how far Trump is willing to go to construct his long-promised border wall. The demand for funding -- refused by congressional Democrats -- triggered a partial government shutdown last month. Since then, hundreds of thousands of federal workers have been furloughed or forced to work without pay.

The pressure on Washington to strike a deal intensified Friday when most workers missed their paychecks for the first time.

Democrats, led by House Speaker Nancy Pelosi, D-Calif., and Senate Minority Leader Chuck Schumer, D-N.Y., have vowed to block any sort of funding for the wall, accusing the president of having “manufactured” a crisis at the border.

"The president of the United States – having failed to get Mexico to pay for his ineffective, unnecessary border wall, and unable to convince the Congress or the American people to foot the bill – has shut down the government," Schumer said in a response delivered jointly with Pelosi on Tuesday. "American democracy doesn’t work that way.  We don’t govern by temper tantrum." 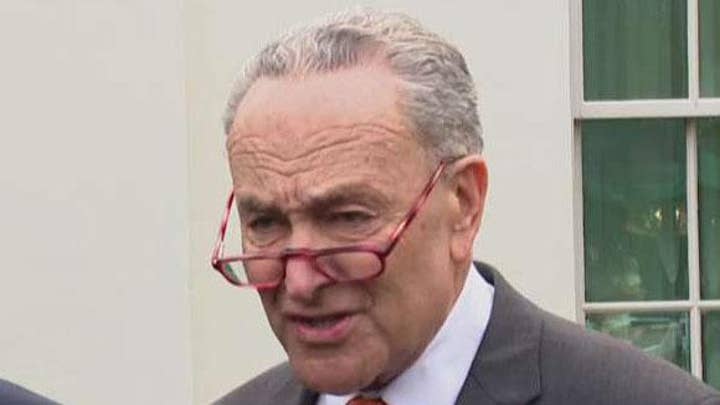 The president has blamed the shutdown on Democrats, and Democrats have blamed the president. Neither side appears willing to budge -- and if the White House and congressional leaders cannot come to an agreement, Trump has vowed to “almost definitely” use his emergency powers to build the wall.