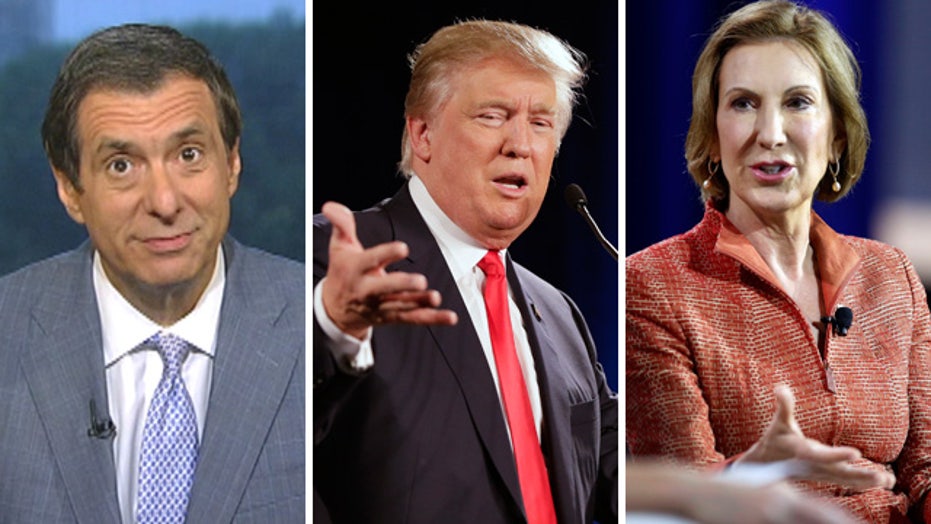 This time he’s gone too far.

How many times have you heard that from the pundits in this campaign?

Donald Trump has said many harsh things about many people, but here he is taking on Carly Fiorina’s face. And getting as much coverage as if he had punched her in the face.

Trump said in a round of phone calls to CNN, Fox and “The View” yesterday that he was talking about her persona, not her looks, and sort of kidding around.

The contretemps began when Rolling Stone quoted The Donald as saying on a plane when Fiorina’s image appeared on a TV monitor:

"Look at that face!" Trump told the magazine while sitting with a Rolling Stone reporter as Fiorina appeared on TV. "Would anyone vote for that? Can you imagine that, the face of our next president."

The next part is telling: "I mean, she's a woman, and I'm not s'posed ta say bad things, but really, folks, come on. Are we serious?"

My general rule: When a public figure says he probably shouldn’t say something…it’s a good time to stop.

I was chatting with Carly Fiorina before she went on Megyn Kelly’s show, and it was clear she wanted to be restrained in her response. Fiorina said on air that she would spend no time worrying about Trump’s remarks but “maybe, just maybe, I’m getting under his skin a little bit because I’m climbing in the polls.” She knew the remarks were controversial enough that she had no need to start swinging back.

The media, of course, are lapping this up: Such an easy story line, pairing the politics of insult with questions of sexism. Just book the guests and let them go at it.

Meanwhile, Jeb Bush unveiled a tax plan. I read several newspaper analyses of how it would cut taxes for almost everyone, with the biggest breaks going to the wealthiest Americans, and could cost more than $3 trillion. Television news, by and large, does not care. A plan by the brother of the ex-president who also cut taxes doesn’t boost ratings, at least not like a debate over Carly’s face.

Equally striking was the dustup between Ben Carson and Trump. I’ve never seen Carson throw a punch. The question now is whether he can take one.

It most decidedly did not begin with a gotcha question. A reporter at a press avail in California asked Carson how he would differentiate himself from Trump. And the doctor seemed to refer back to Trump telling an interviewer that citing his favorite Bible passage would be too personal.

“I don’t, in any way, deny my faith in God,” Carson said. “And I think that probably is a big differentiator.”

The reporter, naturally, followed up: “Can you expand on that? You don’t believe his faith is sincere when he’s, when he’s made comments about it?”

Carson threw another punch: “I haven’t heard it. I haven’t seen it.” Then he recited a biblical proverb about humility.

I’m just surprised that the soft-spoken Carson didn’t talk about his own faith and make the comparison implicit.

Trump, as is his wont, went into counterpunching mode.

"If you look at his past, which I've done, he wasn't a big man of faith,” Trump told CNN’s “New Day.” “All of a sudden he's becoming this man of faith and he was heavy into the world of abortion.” Trump added that he’s “an okay doctor.”

Carson, for the record, is widely recognized as a world-class pediatric neurosurgeon.

Carson quickly sought to lower the temperature in a Washington Post interview, saying he meant to talk about himself, and “if he took that as a personal attack on him, I apologize, it was certainly not the intent.”

But he also said this: “The media frequently wants to goad people into wars, into gladiator fights, you know. And I’m certainly not going to get into that.”

As a general rule, he is right. But not in this case. But Carson’s conciliatory comments to the Post show he went further than he intended.

Trump has widened his lead in the new CNN poll to 32 percent, with Carson in second at 19 percent. It’s striking that the non-politicians in the race are now throwing elbows and jabs, much the way the veteran pols do.

It’s part of the story, no question about it. Politics is a spectator sport. But I bet lots of voters would rather hear more about jobs and taxes and issues that affect their daily lives.