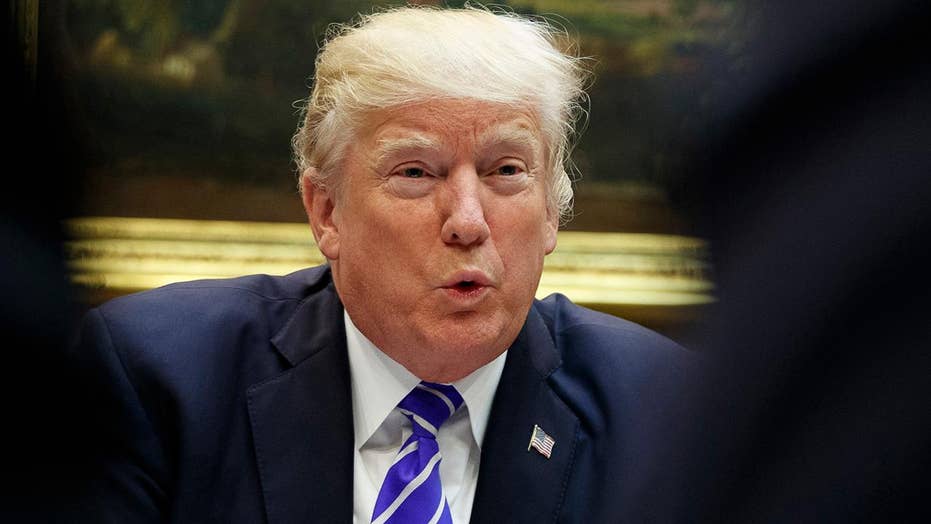 President Trump on Tuesday previewed a major tax reform plan being rolled out by him and congressional Republicans, vowing tremendous middle-class tax cuts and lower corporate rates that will create “millions of new jobs for Americans.”

Trump made the announcement after a White House meeting with Democrats and Republicans on the House Ways and Means Committee.

The president has vowed since his 2016 White House campaign to overhaul the U.S. tax code.

And now that Senate Republicans appear to have failed this week to fulfill another Trump campaign promise -- dismantling ObamaCare -- the president seems full steam ahead on tax reform.

“We will cut taxes tremendously for the middle class,” Trump said Tuesday while flanked by members of the House tax-writing committee, including Chairman Rep. Kevin Brady, R-Texas, and Massachusetts Rep. Richard Neal, the panel’s top Democrat.

“It's time for both parties to come together. … We've been working on this for a long time, but this is the finishing touches.”

The president is scheduled to release a more comprehensive plan Wednesday in Indianapolis.

On Tuesday, Trump said the tax plan will have four “very crucial principles”: making the tax code more fair and simple; middle-class tax cuts; lowering tax rates for businesses; and creating incentives to bring offshore investments back into the country.

He also said the United States has one of the highest business-tax rates in the world and cutting them will again make the country “super competitive.”

“If we do this, we will create millions of new jobs for our people,” said Trump, who also argued the plan’s incentives on investments will bring at least $2.5 trillion in overseas investment back to the country.

If the GOP-controlled Congress passes the plan, it would be the first major overhaul of the U.S. tax code in three decades.

The plan would likely cut the tax rate for the wealthiest Americans, now at 39.6 percent, to 35 percent, people familiar with the plan say.

In addition, the top tax for corporations would be reduced to roughly 20 percent from the current 35 percent, they said.

And it will seek, as widely expected, to simplify the tax system by reducing the number of income tax brackets from seven to three.

Trump has said he wanted a 15 percent rate for corporations. But House Speaker Paul Ryan, R-Wis., has called that impractically low and has said it would risk adding to the soaring $20 trillion national debt.

Vice President Pence is expected to hold events in Michigan and Wisconsin on Thursday to promote the tax plan with business leaders, with other Cabinet members and top administration officials fanning out the same day to talk about the benefits of overhauling the tax system.

Brady has said the legislation will be put forward after the House and Senate enact their budget frameworks.

Republicans are divided over the potential of elimination of some of the deductions.

They're generally in agreement on wanting to cut tax rates and simplify the byzantine tax system. But they're divided over whether to add to the government's ballooning debt with tax cuts. The GOP also is at odds over eliminating the federal deduction for state and local taxes.

House Republicans planned to hold a retreat Wednesday at Fort McNair, Maryland, a few miles from the White House, to discuss the proposal.