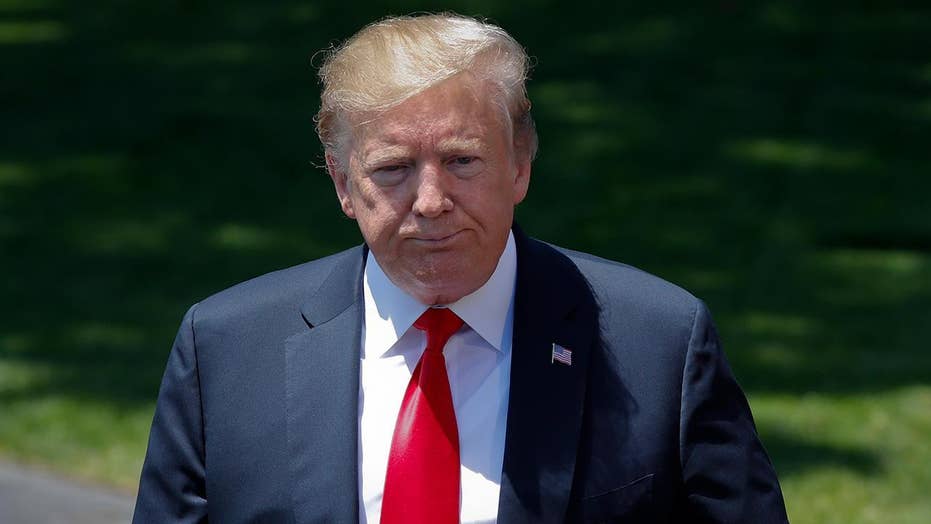 President Trump tells reporters outside the White House that everything Attorney General Barr needs to investigate the Russia 'hoax' has been made available to him.

President Trump vowed Friday to uncover the origins of the Russia investigation for all to see after he approved the declassification of documents related to the surveillance of his campaign during the 2016 presidential election.

Before departing the White House for a trip to Japan, the president defended his decision in the face of Democratic accusations that he had overridden "longstanding rules" on classified material.

“We want to be very transparent, so as you know, I declassified everything,” Trump told reporters. “We are exposing everything.”

The president said his decision will ensure that investigators looking into the origins of the probe have everything they need, "so they’ll be able to see how and why this whole hoax started.” He reiterated his charge that the probe was an "attempted takedown of the president of the United States."

He added: “You’re gonna learn a lot. I hope it’s going to be nice, but perhaps it won’t be.”

The president, meanwhile, denied that he has "payback" in mind as Attorney General Bill Barr launches the review of the Russia probe, now being led by a top federal prosecutor. 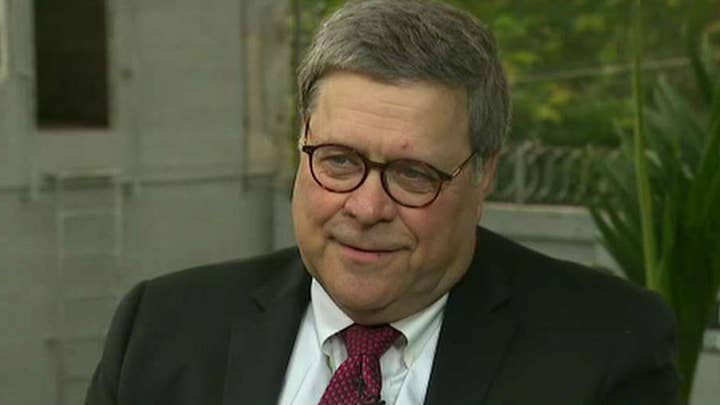 In his Thursday directive, Trump ordered members of the intelligence community to cooperate with Barr’s probe.

The president and the attorney general have both claimed that the Trump campaign in 2016 was a target of “spying,” though intelligence community and law enforcement officials maintain they acted lawfully. Barr came under criticism for testifying last month that “spying did occur” -- but his defenders note that the use of surveillance warrants and informants during that period already has been widely reported.

With the conclusion of Special Counsel Robert Mueller's investigation, the DOJ review opens up another front in the seemingly never-ending battle over the Russia allegations. Democrats, not satisfied with the conclusion of Mueller's investigation which found no evidence of collusion and left the obstruction question open, have escalated their own probes and continue to debate internally over whether to pursue impeachment proceedings. But Trump has long maintained that the true scandal lies in the opening of the FBI probe itself.

At the helm of the DOJ review is U.S. Attorney from Connecticut John Durham. According to sources familiar with the latest investigation, Durham has been working on his review of the Russia probe “for weeks.” He is expected to focus on the period before Nov. 7, 2016—including the use of FBI informants as well as alleged improper issuance of Foreign Intelligence Surveillance Act (FISA) warrants.

A source also told Fox News that Barr is working “collaboratively” on Durham’s investigation with FBI Director Chris Wray, CIA Director Gina Haspel and Director of National Intelligence Dan Coats. Durham is also working with Justice Department Inspector General Michael Horowitz, who is currently reviewing allegations of FISA abuses and the role of FBI informants during the early stages of the Russia investigation.

Meanwhile, Trump on Friday accused congressional Democrats of being “very unhappy” with the results of Mueller’s nearly two-year-long Russia investigation.

“They want to do a re-do of the Mueller report,” Trump said. “They lost. There’s no re-do.”

But Democrats, like House Intelligence Committee Chairman Adam Schiff, D-Calif., are blasting the president for allowing the release of classified materials, calling it a “corrupt escalation of the president’s intention” to politicize the intelligence community.

“The clear intent of this abuse of power is to override longstanding rules governing classified information to serve the President’s political interests, advance his ‘deep state’ narrative, and target his political rivals,” Schiff said in a statement Friday.