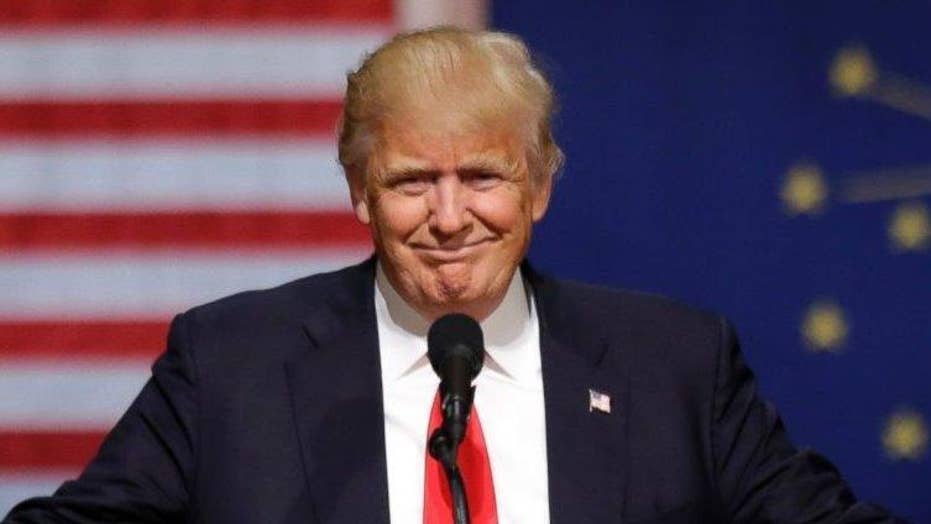 President-elect Donald Trump vowed over the weekend to quickly work out a trade deal with Britain in a bid to help smooth the country's path out of the European Union -- further strengthening ties with the Brexit movement he lauded during his campaign.

At the same time, in an interview with The Times of London published Sunday, Trump also riled European leaders by dismissing the E.U. as a “vehicle for Germany.”

Trump ripped German Chancellor Angela Merkel over her decision to welcome more than a million Syrian refugees into her country. While Trump said he had great respect for Merkel, he accused her of making “a catastrophic mistake,” which triggered Brexit.

“[I]f they [EU countries] hadn’t been forced to take in all of the refugees, so many, with all the problems that it … entails, I think that you wouldn’t have a Brexit," he said.

Trump used the interview to again endorse the Brexit decision to leave the E.U., saying he was a "big fan" of the U.K.

Amid widespread questions over how the U.K. will re-establish trade ties with international partners once it leaves, Trump vowed to work out a U.S.-U.K. agreement soon: "We’re gonna work very hard to get it done quickly and done properly. Good for both sides."

Trump's remarks stand in contrast to President Obama's warning before the June vote that Britain would be at the “back of the queue” for a trade deal if it voted to leave.

The president-elect also showed indifference to the E.U. as a whole: “You look at the European Union and it’s Germany. Basically a vehicle for Germany. That’s why I thought the U.K. was so smart in getting out.”

Trump has spoken positively of the Brexit decision in the past, and repeatedly compared it to his own populist campaign. But his latest remarks, in which he predicted “Brexit is going to end up being a great thing,” along with the promise of a trade deal, were greeted with particular enthusiasm by pro-Brexit politicians.

"It's very good news that the United States of America wants to do a good free trade deal with us and wants to do it very fast and it's great to hear that from President-elect Donald Trump," U.K. Foreign Secretary Boris Johnson told reporters Monday in Brussels.

“I was delighted to hear Mr. Trump speak so positively about Brexit,” U.K. Independence Party MP Douglas Carswell told FoxNews.com. “It means so much to me -- and to the millions of Brits who voted to leave the EU.  It is good to know that our American ally will help us make it work.”

Trump’s remarks come as Prime Minister Theresa May is set to make a major speech on the subject Tuesday, in which she is expected to call for a so-called “hard Brexit” -- in which Britain will also leave the E.U.’s single market and customs union in order to assure control over Britain’s borders.

Carswell, whose party was instrumental in the campaign to leave the E.U., said that Trump’s comments are likely to have a significant impact in breaking down the fierce European opposition to Brexit.

“If there is a U.S./U.K. trade deal based on mutual standard recognition, far from the EU trying to impose protectionist barriers on us, they might even actually ask if they too could be part of something similar,” he said.

Trump also said some NATO partners aren’t paying enough into the alliance, and repeated his past accusation that the alliance is “obsolete.”

"With that being said, NATO is very important to me. There’s five countries that are paying what they’re supposed to. Five. It’s not much,” he said.

Trump’s comments on Europe immediately drew criticism from European politicians. Merkel said, "I think we Europeans have our fate in our own hands” when asked about Trump’s comments Monday morning.

“First, it goes against the statements of the nominated defense secretary a few days ago. We have to see what it will yield in terms of U.S. foreign policy. The same goes for the statements on trade policy,” he said, according to the Wall Street Journal. “We count on the U.S. to stick to its international obligations, including in the World Trade Organization.”

“As is the case with Brexit, the best way of defending Europe, which is rather what Mr. Trump has invited us to do, is to remain united, to remain as a bloc, not to forget that the strength of the Europeans lies in their unity,” he said, according to the Journal.

However, Carswell indicated there may be some support for Trump’s stances in Britain.

“Europe needs to start meeting its responsibilities as part of the wider West -- and post-Brexit Britain can be part of making that happen,” he said.

In the wide-ranging interview, Trump also expressed hope that the U.S. can “make some good deals” with Russia, including reducing nuclear weapons in exchange for the lifting of U.S. sanctions.