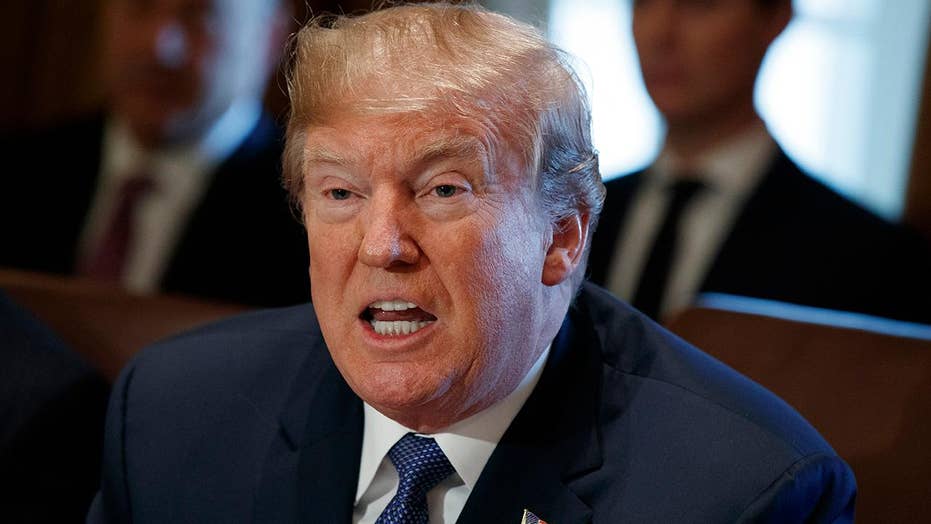 Trump: We want to get rid of chain migration

President Trump called on congressional Republicans Thursday to end “chain migration” and to “terminate” the Diversity Visa Program, after suggesting the New York terror suspect brought “23 people” into the U.S. with him.

In a meeting with House Republicans at the White House on Thursday after their long-awaited tax reform package, Trump, seated between House Speaker Paul Ryan, R- Wis., and House Ways and Means Committee Chairman Kevin Brady, R-Texas, pivoted to national security in the wake of Tuesday’s deadly attack.

“I am calling on Congress to TERMINATE the diversity visa lottery program that presents significant vulnerabilities to our national security,” Trump tweeted, along with a video from the meeting.

Minutes later, Trump tweeted that “Congress must end chain migration so that we can have a system that is SECURITY BASED! We need to make AMERICA SAFE! #USA,” and added an emoji of an American flag.

The president has been vocal on the issue of chain migration throughout his administration as he efforts to tighten and reform existing immigration laws with both his State Department and Department of Homeland Security.

The New York City terrorist, Sayfullo Saipov, came into the United States in 2010 from Uzbekistan under the State Department’s Diversity Immigrant Visa Program. The president has called for the repeal of that program, which was introduced by Senate Minority Leader Chuck Schumer, D-N.Y., but passed with Republican support and was signed by Republican President George H.W. Bush.

Chain migration has been a topic of conversation this week, after the president suggested Wednesday that the suspect brought in “23 people” to the U.S. “with him.”

“This man that came in –or whatever you want to call him –brought in, with him, other people,” Trump said during his Cabinet meeting on Wednesday. “And he was a point, he was the point of contact—the primary point of contact for, and this is preliminary—23 people that came in, or potentially came in with him.”

Chain migration happens when immigrants can enter the country, simply to be united with a relative already living in the U.S. The type of visa Saipov possessed could, theoretically, have allowed dozens of his family members into the U.S.

The Department of Homeland Security told Fox News that Saipov was admitted to the U.S. “upon presentation of a passport with a valid diversity immigrant visa to U.S. Customs and Border Protection in 2010.”

Regarding any individuals Saipov allegedly sponsored to enter the country, a State Department spokesperson told Fox News that they were aware of reports, but were not able to comment on specific visa cases, due to the confidentiality of visa records under U.S. law.

Congressional Republicans, even those who are not typically in lockstep with the president, have rallied around his call for “extreme vetting” and the repeal, or reform of the Diversity Visa Lottery Program in the wake of Tuesday’s attack.

“The lottery system, I’ve always been against it because it’s random—completely random,” Chairman of the House Homeland Security Committee Michael McCaul, R-Texas, said on “Fox & Friends” Wednesday. “I thought it should be merit-based…I have been working with Chairman (Bob) Goodlatte to abolish this system, and I think this case just further demonstrates why that is absolutely necessary.”

Goodlatte, R-Va., said he has called for ending the diversity visa lottery “for years” and has sponsored legislation to do that.

“This flawed policy is just foolish in the age in which we live. Those in the world who wish us harm can easily engage in this statistical gamble with nothing to lose,” Goodlatte said in a statement Wednesday. “Our immigration policy should be based primarily on our national needs, security, and economics and not in part on any arbitrary system.”

Even Sen. John McCain, R-Ariz.,  said the Diversity Visa Program should be scrapped and replaced with a merit-based immigration system.

And Sens. David Perdue, R-GA., and Tom Cotton, R-Ark., proposed eliminating the Diversity Visa Lottery Program as part of the RAISE Act. “While Senate Democrats originally created the Diversity Visa Lottery in 1990, many have supported legislation that would have eliminated it in the years since,” Perdue said in a statement Wednesday. “I hope we can include this area of common ground as we work to fix our broken immigration system and strengthen our national security.”