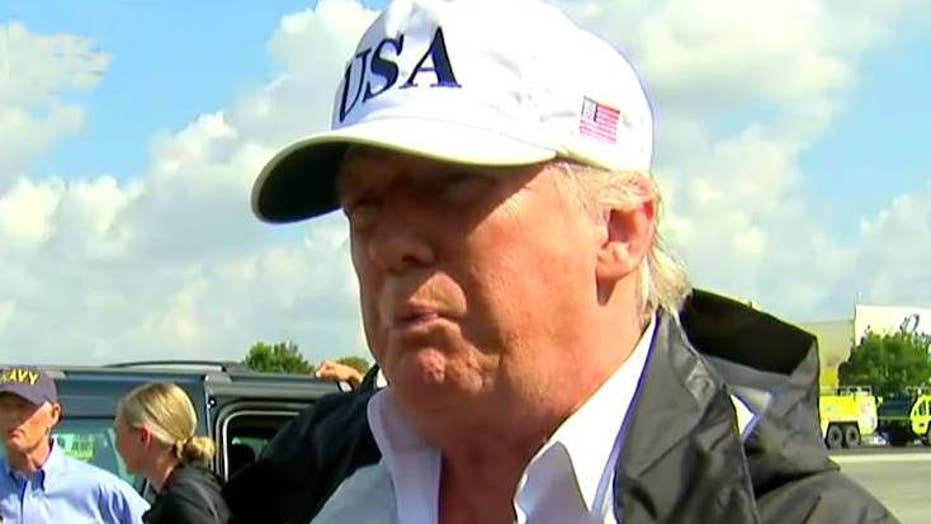 The president addresses the issues as he arrives in Florida

President Donald Trump said Thursday that Republican congressional leaders were "very much on board" with negotiations to protect so-called "Dreamers"— hundreds of thousands of young immigrants who were brought into the U.S. illegally — from deportation.

However, the president also vowed "there will be no amnesty" and pushed back against claims by Senate Minority Leader Chuck Schumer, D-N.Y., and House Minority Leader Nancy Pelosi, D-Calif., that a deal had been reached at a White House dinner Wednesday night.

After Trump landed in Florida, he declared repeatedly, "If we don't have a wall, we're doing nothing."

Schumer and Pelosi issued a joint statement following the dinner announcing a broad agreement on immigration. On the Senate floor Thursday morning, Schumer insisted that both sides were in agreement and there was no dispute.

"If you listen to the president's comments this morning ... it is clear that what Leader Pelosi and I put out last night was exactly accurate," said Schumer. "We have reached an understanding on this issue. We have to work out details, and we can work together on a border security package with the White House and get DACA on the floor quickly."

Indeed, in the face of ferocious pushback from conservative lawmakers and media outlets including Breitbart, run by former Trump adviser Steve Bannon, the White House appeared focused more on shaping presentation of the agreement, than on denying it outright.

"By no means was any deal ever reached," White House spokeswoman Lindsay Walters told reporters aboard Air Force One as the president traveled to Florida. "This is something that Congress needs to work on."

The House's foremost immigration hard-liner, Rep. Steve  King, R-Iowa, addressed Trump over Twitter, writing that if the reports were true, "Trump base is blown up, destroyed, irreparable, and disillusioned beyond repair. No promise is credible."

Schumer and Pelosi said in a statement that the details on border security needed to be negotiated, that both sides agreed "the wall would not be any part of this agreement" and that Trump said he would pursue the wall later.

And soon after, Trump appeared to confirm that approach. "The wall will come later, we're right now renovating large sections of wall, massive sections, making it brand new," he told reporters before his Florida trip.

He also said Republican congressional leaders, House Speaker Paul Ryan, R-Wis., and Senate Majority Leader Mitch McConnell, R-Ky., favored his approach on the immigration program. "Ryan and McConnell agree with us on DACA," Trump said, adding that he had spoken to them by telephone.

Ryan, meanwhile, was adamant after speaking with Trump and White House Chief of Staff John Kelly that no agreement had been reached.

Republicans in Congress, meanwhile, tried to make sense of the confusion.

"Slow down the trains, there's no agreement," said Rep. Dave Brat, R-Va., who warned" ''You can make a deal all you want, it's got to get past the House and the Senate."

In a series of tweets Thursday, Trump expressed empathy for the nearly 800,000 young people — many brought to the United States as toddlers or children — who were protected from deportation and given work permits under DACA.

"Does anybody really want to throw out good, educated and accomplished young people who have jobs, some serving in the military? Really!" he tweeted Thursday."

Trump announced last week that his administration was rescinding the program, but gave Congress six months to come up with a legislative fix.

The back-and-forth comes as the president has suddenly turned to Democrats to jump-start his legislative imperatives. Only days ago, Trump and the Democratic leaders agreed to back a three-month extension of the debt limit in order to speed hurricane assistance.