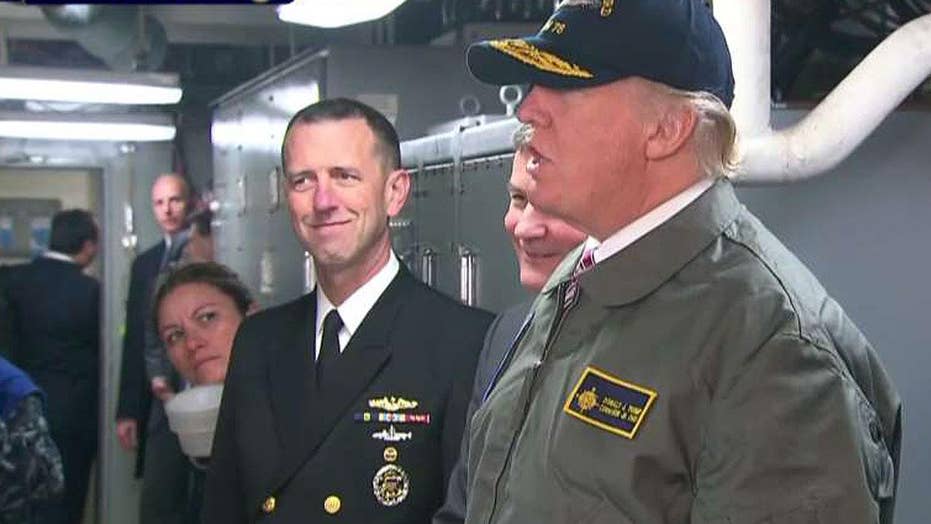 President Trump says he has 'full confidence' in Sessions

President Trump said Thursday he has “total” confidence in Jeff Sessions amid revelations about the attorney general's contact with the Russian ambassador, and kept his focus on renewing calls for a large increase in defense spending.

Trump, in a speech on the USS Gerald R. Ford -- a $12.9 billion warship expected to be commissioned this year – urged “a great rebuilding” of the U.S. military.

“After years of endless budget cuts that have impaired our defenses, I am calling for one of the largest defense spending increases in history,” he said, in his first speech since his well-received address to a joint session of Congress on Tuesday.

Ahead of the speech, Trump was asked by pool reporters about the controversy engulfing Sessions – who, it was revealed Wednesday, spoke with the Russian ambassador on two separate occasions in 2016, despite telling lawmakers at his confirmation hearing that he had no communications with Russian officials.

Some Democrats have called for Sessions to resign over the controversy, while some Republicans have said Sessions should recuse himself from the investigation into alleged Russian interference in the election. But Sessions and the White House have said that the meetings were part of his role on the Senate Armed Services Committee and were routine.

Asked by CNN’s Jim Acosta if he still had confidence in Sessions, Trump replied: “total.” He also said he wasn’t aware Sessions had spoken to the Russian ambassador, and when asked if Sessions spoke truthfully at his confirmation hearing, Trump said: "I think he probably did."

Trump did not mention the Sessions controversy at all during his public remarks, forgoing a typical Trump tactic of tackling a controversy head on. Instead he stayed on-message, blending his calls for the $54 billion in new defense spending with his theme of “America First.”

“American ships will sail the seas, American planes will soar the skies, American workers will build our fleets and America’s military will ensure that even through the darkest nights, a bright and glowing sun will always shine on our nation and on our people,” he said, calling for an end to the so-called defense sequester.

He also complained that “in these troubled times our Navy is the smallest it’s been since World War I.”

“Right now our aging front-line strike fighters are often more likely to be down for maintenance than up in the sky,” he said.

The PCU Gerald R. Ford CVN 78, located at Newport News Shipbuilding, will be the first of the Navy's next generation of aircraft carriers and is expected to accommodate some 2,600 sailors. It has been hit by a number  of cost overruns and delays.

Fox News’ Wes Barrett and The Associated Press contributed to this report.