Part 1 of Laura Ingraham's exclusive interview with President Trump on 'The Ingraham Angle.'

President Trump told Fox News' Laura Ingraham in an exclusive interview Monday night that he believes demonstrations outside the White House on the final night of the Republican National Convention last week were bankrolled by "some very stupid rich people."

Trump added on "The Ingraham Angle" that an RNC attendee had traveled to Washington "on a plane from a certain city, and in the plane it was almost completely loaded with thugs wearing these dark uniforms, black uniforms with gear and this and that."

The president declined to say who had told him the story, but promised Ingraham he would reveal it "sometime."

"This person was coming to the Republican National Convention and there were like seven people in the plane [with] this person, and then a lot of people were on the plane to do big damage," Trump insisted. "This is all happening."

The president added that "people you've never heard of, people in the dark shadows" may be facilitating much of the left's activism.

"The money is coming from some very stupid rich people [who] have no idea that if their thing ever succeeded, which it won't, they will be thrown to the wolves like you've never seen before," he said.

"Black Lives Matter is a Marxist organization," the president said. "You remember [them chanting] 'Pigs in a blanket, fry them like bacon' [in 2015].

"That was the first time I ever heard of Black Lives Matter. I said, 'That's a terrible name, it's so discriminatory.' It's bad for Black people, it's bad for everybody and all of a sudden it becomes like sort of -- although now if you look, it's gone way down because people are tired of this stuff, what's going on." 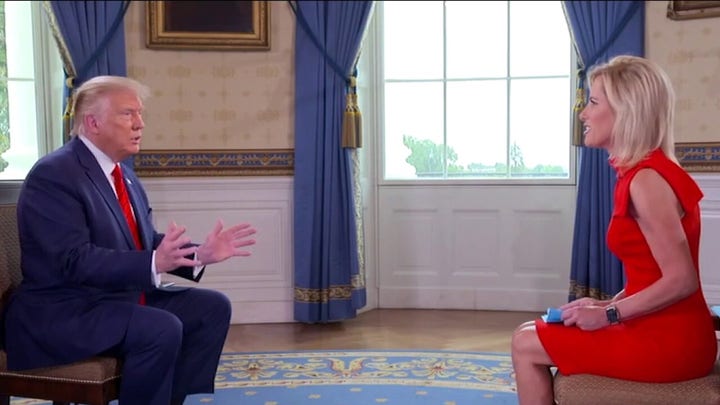 Later in the interview, Trump told Ingraham that if he wasn't president, "you would have riots like you've never seen" in response to Joe Biden's assertion that rioting and violence in cities across America is a hallmark of "Donald Trump's America."

The president also slammed Portland Mayor Ted Wheeler as "incompetent" after the Democrat blamed Trump for the violent confrontation that led to the killing of a Patriot Prayer supporter in the Oregon city over the weekend. 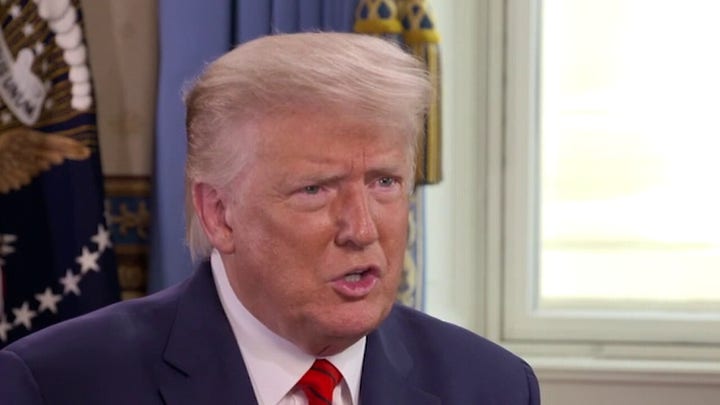 "I've offered to send in the National Guard. I've offered to send in anybody they want," Trump said. "I could put that [unrest] out in 45 minutes and it would stop. And I think the people of Portland and the people of Oregon, I know it's a liberal state -- considered liberal -- they're tired of it. They're tired of having, of living with this curse."

The president added that he does not want his supporters to get involved in confrontations with left-wing protesters, but would rather they "leave it to law enforcement.

"But my supporters are wonderful, hardworking, tremendous people," Trump added. "And they turn on the television set and they look at a Portland or they look at a Kenosha before I got involved and stopped it."

Trump also responded to Wisconsin Democratic Gov. Tony Evers, who called on the president to scrap his planned trip to Kenosha to inspect the damage from rioting that followed the Aug. 23 police shooting of Jacob Blake.

"[I'm going] because I am a tremendous fan of law enforcement and I want to thank the law enforcement. They've done a good job," he said. "And when the governor says that I shouldn't come or he'd prefer that I not come. I'm the one that called him and said, 'Tony, you got to bring out the National Guard.' [And he said] 'Well, I don't really want to do it.

Turning to the coronavirus pandemic, Ingraham asked Trump, "If you had to do it all again, would you put [Dr. Anthony] Fauci front and center every day in charge of the [White House] coronavirus task force?

"I disagree with a lot of what he said," Trump answered. "He said keep [travel] open for China. That was a big mistake. And he admits it.

"I just, I get along with him, but every once in a while he'll come up with one that I say, 'Where did that come from?' I inherited him. He was here. He was part of this huge piece of [the] machine."