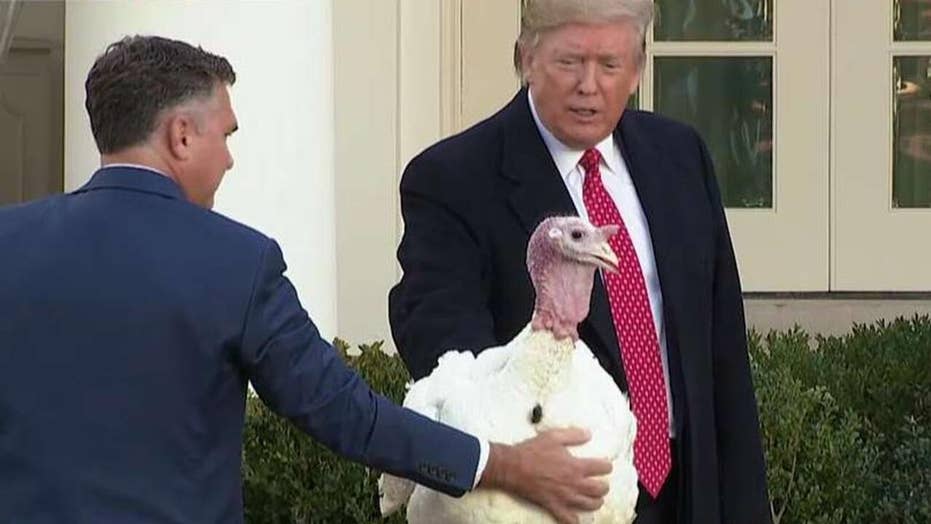 In the latest evidence that the impeachment fight is all-consuming, Trump wise-cracked that the birds already had been summoned to appear for the House Intelligence Committee chairman's inquiry.

“These turkeys will remain calm under any condition,” Trump said. “Which is good because they’ve been subpoenaed to appear in Adam Schiff’s basement on Thursday.”

Schiff, a Democratic California congressman, just wrapped up two weeks of hearings in the impeachment inquiry and is now working on a report to send to the Judiciary Committee. The testimony featured claims that top officials linked a White House meeting, and possibly aid, to a request for Ukraine to launch investigations of Democrats.

But witnesses also acknowledged they either did not hear such a condition from Trump, or hadn't even met Trump -- a point Trump indirectly made as he pardoned the two turkeys.

Bread and Butter, two turkeys from North Carolina that will be pardoned by President Donald Trump, hang out in their hotel room at the Willard InterContinental Hotel, Monday, Nov. 25, 2019, in Washington. (AP Photo/Jacquelyn Martin)

“Unlike previous witnesses, you and I have actually met,” Trump said to the birds on Tuesday.

For good measure, Trump took a swipe at the media as well: “I expect the pardon will be popular with the media,” Trump said. “After all, turkeys [are] closely related to vultures.”

The two turkeys – Bread and Butter – traveled to Washington from North Carolina and spent their time in the capital at the Willard InterContinental Hotel.

With the act of clemency by the president, they will now live out their days at a Virginia Tech facility.

Bread is a 45-pound turkey who likes Cheerwine, bluegrass music and college basketball, according to the White House. Butter weighs 47 pounds and enjoys eating sweet potato fries, listening to bagpipes and watching NASCAR.

A door has a privacy request hanging on it outside the hotel room where two turkeys that will be pardoned by President Donald Trump are staying at the Willard InterContinental Hotel, Monday, Nov. 25, 2019, in Washington. The turkeys will be pardoned by the president during a ceremony at the White House ahead of Thanksgiving. (AP Photo/Jacquelyn Martin)