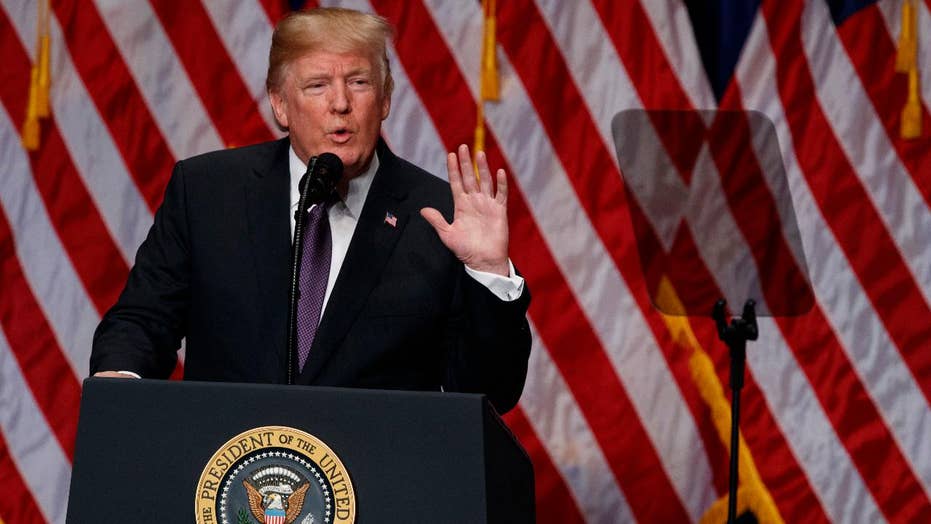 President Trump on Monday unveiled a national security strategy that enshrines his “America First” approach into U.S. policy, stressing American strength and economic security and putting rivals like China and Russia on notice.

“America is in the game and America is going to win,” Trump said, making clear that the United States will stand up for itself even if that means acting unilaterally or alienating others on issues such as trade, climate change and immigration.

In a 20-minute speech, Trump said the U.S. faces “an extraordinarily dangerous world” and one of his goals is to make sure the U.S. is “leading again on the world stage.”

Trump, who released his 68-page national security strategy ahead of his speech, said he is making good on campaign pledges that he promised would “revitalize the American economy, rebuild our military, defend our borders, protect our sovereignty and advance our values.”

Trump’s national security strategy, a document mandated by Congress, is based on four principles: protecting the homeland by restricting immigration, pressuring trading partners, building up the military and otherwise increasing U.S. influence globally.

Trump also took on the rise in North Korea’s nuclear aggression and painted China and Russia as U.S. rivals despite his own relationship with Russian President Vladimir Putin, which included two telephone calls last week.

“China and Russia challenge American power, influence, and interests, attempting to erode American security and prosperity,” the strategy document says. “They are determined to make economies less free and less fair, to grow their militaries, and to control information and data to repress their societies and expand their influence.”

The strategy accuses the two nations of “developing advanced weapons and capabilities that could threaten our critical infrastructure and our command and control architecture.”

While Trump in his address did not mention Russia meddling in U.S. elections, the written strategy also calls out Moscow for “using information tools in an attempt to undermine the legitimacy of democracies” and says adversaries like Russia “target media, political processes, financial networks and personal data.”

In a shift from the last administration, Trump's strategy also refers to the "jihadist" terror threat and "Islamist" terror groups.

“We will pursue threats to their source, so that jihadist terrorists are stopped before they ever reach our borders,” it says.

Further, the strategy backs off naming climate change as a major threat. The last such strategy document, prepared by then-President Barack Obama in 2015, declared climate change an "urgent and growing threat to our national security."

The Trump plan removes that determination -- following the administration's threat to pull out of the Paris climate accord. The strategy sets a goal of being an "energy-dominant nation" and says that the United States "recognizes the importance of environmental stewardship."

Despite the risk of potential isolation presented by certain elements of Trump's strategy, its fundamentals are not a surprise.

The strategy emphasizes that U.S. economic security is national security. And it stresses that the U.S. is interested only in relationships with other countries, including in alliances such as NATO, that are fair and reciprocal.

The strategy also details the threats of "rogue regimes," like North Korea and says it is “confronting the danger posed by the dictatorship in Iran.”

The document credits the Trump administration with crushing ISIS in Syria and Iraq and vows to “continue pursuing them until they are destroyed.”

"Some of our partners are working together to reject radical ideologies and key leaders are calling for a rejection of Islamist extremism and violence," it says. "Encouraging political stability and sustainable prosperity would contribute to dampening the conditions that fuel sectarian grievances."

Despite international challenges, the document cites emerging opportunities to advance American interests in the Middle East.

The strategy document asserts that "for generations the conflict between Israel and the Palestinians has been understood as the prime irritant preventing peace and prosperity in the region. Today, the threats from radical jihadist terrorist organizations and the threat from Iran are creating the realization that Israel is not the cause of the region's problems. States have increasingly found common interests with Israel in confronting common threats."

Monday’s “national strategy” is the first of a number of reports the Trump administration is expected to roll out over the next few months that takes on counter-terrorism, biodefense, nuclear posture and missile defense.