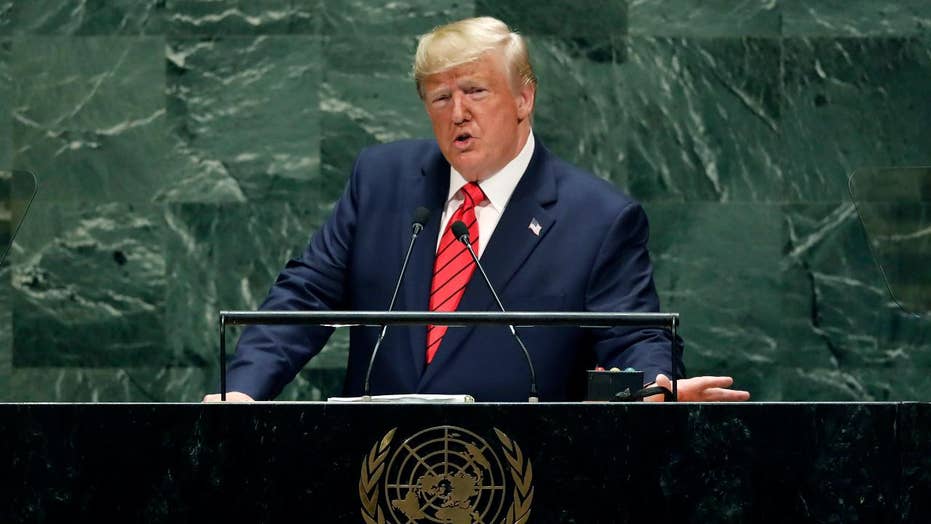 On the roster: Trump Ukraine games tip Dems toward impeachment - Warren closing in on Biden in Nevada - Audible: Don’t get it twisted, bro - Goo goo g'joob

TRUMP UKRAINE GAMES TIP DEMS TOWARD IMPEACHMENT
Politico: “President Donald Trump on Tuesday shifted his explanation for temporarily withholding hundreds of millions of dollars in military aid to Ukraine, citing what he criticized as a lack of similar financial contribution by other Western powers to the Eastern European nation. Trump’s latest remarks are at odds with his assertion Monday that he denied the assistance because he feared bureaucratic corruption within Ukraine’s government. The new claim also comes after weekend reports that he repeatedly pressured newly elected Ukrainian President Volodymyr Zelensky during a July phone call to investigate former Vice President Joe Biden’s son. ‘As far as withholding funds, those funds were paid. They were fully paid,’ Trump told reporters Tuesday, ahead of his address to the United Nations General Assembly. ‘But my complaint has always been, and I'd withhold again, and I'll continue to withhold until such time as Europe and other nations contribute to Ukraine,’ he continued.”

Officials say Pelosi quietly making moves - WaPo: “[Speaker Nancy] Pelosi, according to multiple senior House Democrats and congressional aides, has been gauging the mood of her caucus members about whether they believe that allegations that Trump pressured the Ukrainian president to investigate a political foe are a tipping point. She was making calls as late as Monday night, and many leadership aides who once thought Trump’s impeachment was unlikely now say they think it’s almost inevitable. The officials spoke on the condition of anonymity to speak frankly. Pelosi’s conversations — and reconsideration of her long-held position that impeachment is too divisive — come amid a growing clamor for impeachment that extends beyond the party’s liberal base and many Democratic presidential candidates to moderate lawmakers in competitive House seats.”

Moderate Dems join the effort - Fox News: “A slew of key swing-district Democrats late Monday threw their support en masse behind opening a formal impeachment inquiry, as The New York Times, The Washington Post and The Wall Street Journal reported in the evening that President Trump personally ordered acting White House chief of staff Mick Mulvaney to freeze nearly $400 million in military aid to Ukraine just days before he pressed the new Ukrainian president to investigate Joe Biden and his son Hunter. The rapid-fire declarations by the influential Democrats, after seemingly months of teetering on the brink, came just a day after House Speaker Nancy Pelosi strongly suggested she was now warming to the idea of impeaching the president. Speaking to Fox News, a House Democratic leadership aide confirmed that the Democratic caucus will meet Tuesday afternoon to discuss the Ukraine matter and how to proceed.”

Trump’s attacks on Biden worry Dems of 2016 repeat - WaPo: “But in a worrisome sign for Democrats anxious about reliving the party’s woes in 2016, [the Biden] campaign’s counterattack is being drowned out by a pro-Trump network on social media and cable news that kicked into gear over the weekend, leveling accusations against Biden that have scant factual basis. … The flurry of online attacks against Biden carries echoes of conspiracy theories spread by Trump and his allies about Hillary Clinton’s health and claims about her foreign entanglements that helped turn voters against her. The onslaught comes at a crucial moment in the Democratic primary contest, as the former vice president attempts to showcase his ability to go toe-to-toe with Trump. But with the Democratic National Committee attempting to be a more neutral arbiter than it was in 2016, when it was accused of aiding Clinton, the party helped monitor viral attacks but publicly remained silent.”

THE RULEBOOK: PROVE YOURSELF
“To reverse and undo what has been done by a predecessor, is very often considered by a successor as the best proof he can give of his own capacity and desert… and that the less he resembles him, the more he will recommend himself to the favor of his constituents.” – Alexander Hamilton, Federalist No. 72

TIME OUT: ONE OF A KIND
Smithsonian: “The guitar Prince plays in [the Purple Rain video] was custom-made for him by a luthier at a Minneapolis music shop called Knut-Koupee Enterprises. … It made sense, even then, that Prince would require an instrument that didn’t resemble anything anyone else was playing. Knut-Koupee made three so-called ‘cloud’ guitars for Prince in the early 1980s. … In 1993, Prince gave a cloud guitar to the Smithsonian Institution, but he didn’t include any information about the instrument’s origins. But earlier this year, John Woodland, the conservator for Prince’s guitar collection … reached out to the Smithsonian with a sneaking suspicion. After the guitar underwent a CT scan and extensive paint analysis, what they found was a shocker… This wasn’t just a cloud guitar, in other words, it was the cloud guitar—the instrument responsible for some of the most iconic sounds and images in American popular music.”

WARREN CLOSING IN ON BIDEN IN NEVADA
USA Today: “Elizabeth Warren has pulled within striking distance of Joe Biden for the lead in Nevada's influential presidential caucuses. A new Suffolk University/USA TODAY Network Poll, taken after this month's Democratic debate, shows Biden at 23% and Warren at 19% in Nevada, the state that follows Iowa and New Hampshire in the opening presidential contests next year. Bernie Sanders is at 14%. While Warren trailed Biden, the Massachusetts senator was within the margin of error of the former vice president for the first time in a public poll in the Silver State. … Among the second tier of candidates in Nevada, California Sen. Kamala Harris was at 4% and South Bend (Ind.) Mayor Pete Buttigieg, entrepreneur Andrew Yang and activist Tom Steyer at 3%. … The survey showed Warren positioned to increase her support as the Democratic field narrows. She was the ‘second choice’ of 19%, compared to 16% for Biden, 12% for Sanders and 10% for California Sen. Kamala Harris.”

DNC raises qualifying thresholds for November debate - Fox News: “The DNC announced on Monday that to qualify for the November showdown, candidates must reach at least 3 percent in four approved national or early-voting-state polls. That’s up from the 2 percent needed to reach the stage at the September and October debates and up from the 1 percent needed in three approved surveys for the June and July debates. But, to tamper down any criticism from the early voting states, the DNC added another way to satisfy the polling criteria – reaching 5 percent in two qualifying surveys in Iowa, New Hampshire, Nevada or South Carolina – the first four states to vote in the nominating calendar. The window for the polling is from Sept. 13 to seven days before the still-unannounced November debate. In previous debates, candidates had until two weeks before the showdown to reach the polling criteria.”

AUDIBLE: DON’T GET IT TWISTED, BRO
“Actually, it is Kohl’s.” – Sen. Bernie Sanders said during an Iowa town hall when a supporter contrasted his fashion to President Trump’s, saying Sanders got his clothes at J.C. Penny.

GOO GOO G'JOOB
Fox News: “A Russian navy boat embarking on a research expedition in the Arctic Sea sunk after being attacked by a female walrus that was defending her young, according to reports Monday. The Altai, a tugboat operated by the Russian navy’s Northern Fleet, carried researchers from the Russian Geographical Society and other expedition participants into waters near a remote island chain called Franz Josef Land in the Arctic Sea, Ars Technica reported. The boat dispatched a smaller inflatable landing craft in shallow waters off Wilczek Island to bring researchers ashore near Cape Heller. Before the boat could reach the beach, it was attacked by a female walrus who was probably ‘fearing for her cubs,’ according to a press release from the Russian Geographical Society. ‘The boat sank, but a tragedy was avoided thanks to the prompt action by the squad leader. All landing participants safely reached the shore,’ the press release said.”

AND NOW, A WORD FROM CHARLES…
“The first week, I thought, the terrible thing is that people are going to judge me now by a different standard. If I can just muddle through life, they'll say it was a great achievement, given this. I thought that would be the worst, that would be the greatest defeat in my life -- if I allowed that. I decided if I could make people judge me by the old standard, that would be a triumph and that's what I try to do. It seemed to me the only way to live.” – Charles Krauthammer (1950-2018) speaking with the Washington Post on Aug. 17, 1984.