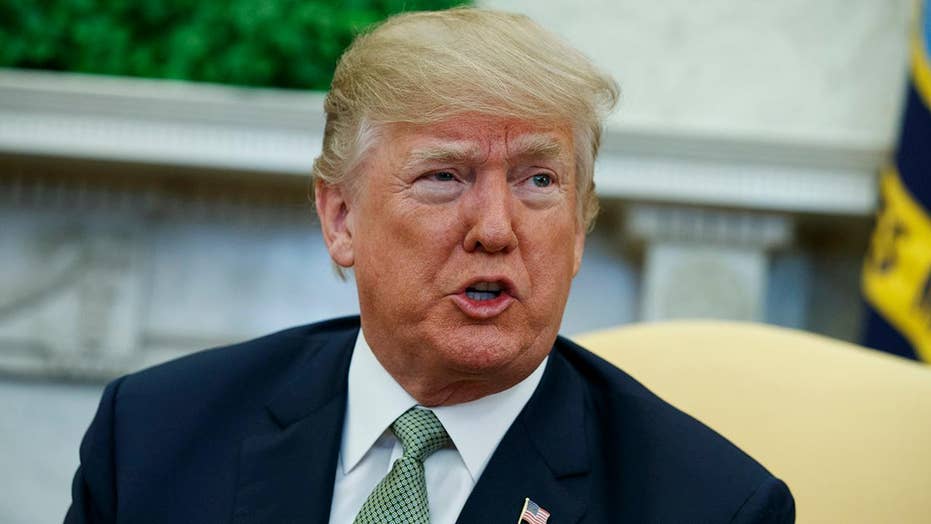 The new White House plan calls for the death penalty for some traffickers.

The White House announced Sunday that it intends to seek the death penalty for certain drug traffickers "where appropriate under the law" in a bid to slow down the country's opioid epidemic.

The White House also said that President Trump would call on Congress to pass legislation lowering the amount of drugs that would invoke mandatory minimum sentences for traffickers.

Trump was expected to formally announce the plan on Monday during a visit to New Hampshire. He will be accompanied by first lady Melania Trump, who has shown an interest in the issue, particularly as it pertains to children.

The president had promised to make fighting the drug crisis a priority during the campaign. At a rally in Pennsylvania last weekend, Trump suggested mandating the death penalty for drug dealers in the United States and claimed the American justice system was too soft on traffickers.

"You kill 5,000 people with drugs because you're smuggling them in and you are making a lot of money and people are dying. And they don’t even put you in jail," Trump said at the time. "That's why we have a problem, folks. I don't think we should play games."

Trump made similar comments at a recent White House summit on opioids. "Some countries have a very, very tough penalty -- the ultimate penalty. And, by the way, they have much less of a drug problem than we do," Trump said. "So we're going to have to be very strong on penalties."

The Justice Department said the federal death penalty is available for several limited drug-related offenses, including violations of the "drug kingpin" provisions of federal law.

The White House plan amounts to a three-pronged attack on the opioid crisis: bolstering law enforcement against smuggling and trafficking, building up a campaign to educate Americans about the dangers of opioid abuse and over-prescription and improving funding for treatment through the federal government.

The plan's objectives include reducing opioid prescriptions by one-third within three years and ensuring that all government healthcare providers adopt best practices for prescribing such drugs within five years. The White House has also called for increased research and development through public-private partnerships between the federal National Institutes of Health and pharmaceutical companies.

Opioids, including prescription opioids, heroin and synthetic drugs such as fentanyl, killed more than 42,000 people in the U.S. in 2016, more than any year on record, according to the Centers for Disease Control and Prevention. Trump has declared that fighting the epidemic is a priority for the administration but critics say the effort has fallen short.

Last October, Trump declared the crisis a national public health emergency, short of the national state of emergency sought by a presidential commission he put together to study the issue.