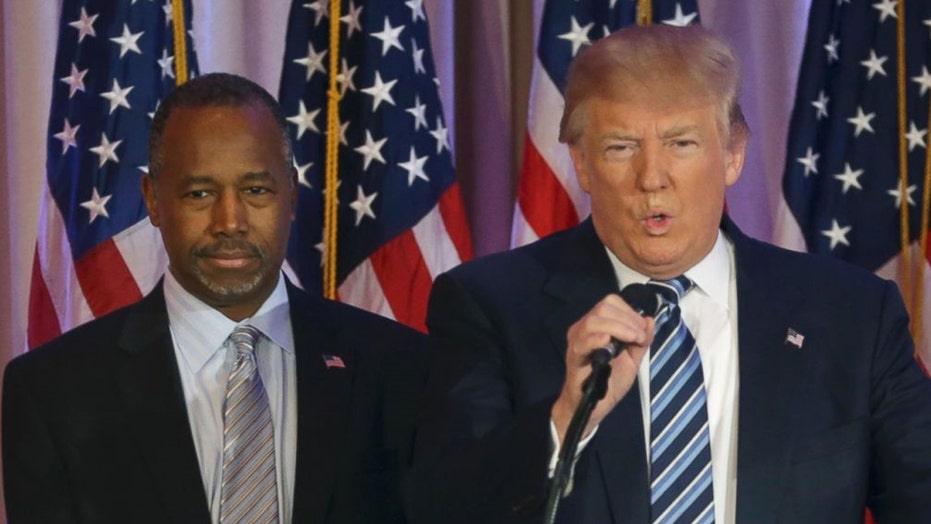 Dr. Carson picked as Secretary of Housing and Urban Development

Trump said in his statement that he was “thrilled to nominate Carson,” adding that he “has a brilliant mind and is passionate about strengthening communities and families within those communiuties.”

Carson had recently downplayed having any role in the Trump administration, saying that he didn’t know where he would fit. But in a statement on Monday, the retired pediatric neurosurgeon said he felt he could "make a significant contribution particularly by strengthening communities that are most in need."

"We have much work to do in enhancing every aspect of our nation and ensuring that our nation’s housing needs are met," he said. Carson also tweeted that he would accept the position.

Carson, who had previously been rumored to be a contender for a job heading Veteran’s Affairs, Education or Health and Human Services, could appear at first glance as an odd choice for HUD. However, Carson wrote and spoke about the department and issues affected by its actions numerous times during his time as a primary candidate, and he also addressed some of what may soon face him in a Facebook post last month that hinted at a HUD job offer from Trump.

“After serious discussions with the Trump transition team, I feel that I can make a significant contribution particularly to making our inner cities great for everyone,” Carson wrote. “We have much work to do in strengthening every aspect of our nation and ensuring that both our physical infrastructure and our spiritual infrastructure is solid. An announcement is forthcoming about my role in helping to make America great again.”

He also told Fox News Channel’s “Your World with Neil Cavuto” in an interview last month that the HUD position was "one of the offers [from Trump] that is on the table."

Carson ran against Trump during the Republican primary battle. But after he dropped out of the White House race in March, the subdued doctor quickly endorsed the boisterous businessman and became one of Trump’s most visible surrogates.

Caron's position in the cabinet requires Senate confirmation before it becomes official.

Carson has often recounted his childhood as the son of a single mother in inner-city Detroit in his books and motivational speeches. In his 1996 autobiography "Gifted Hands," Carson wrote of the humiliation he felt using food stamps from his mom to pay for bread and milk, and said how he began to excel at school only after receiving a free pair of glasses that allowed him to see the lessons written on chalk boards.

Carson has not said whether his family ever lived in federally-funded housing or received Section 8 subsidies to help pay rent, but as a political figure he has criticized such public assistance programs for creating "dependency" on the government among low-income minorities.

"I'm interested in getting rid of dependency, and I want us to find a way to allow people to excel in our society, and as more and more people hear that message, they will recognize who is truly on their side and who is trying to keep them suppressed and cultivate their votes," Carson said in a speech at the Conservative Political Action Conference in 2015.

Fox News’ Kristin Brown and the Associated Press contributed to this report.