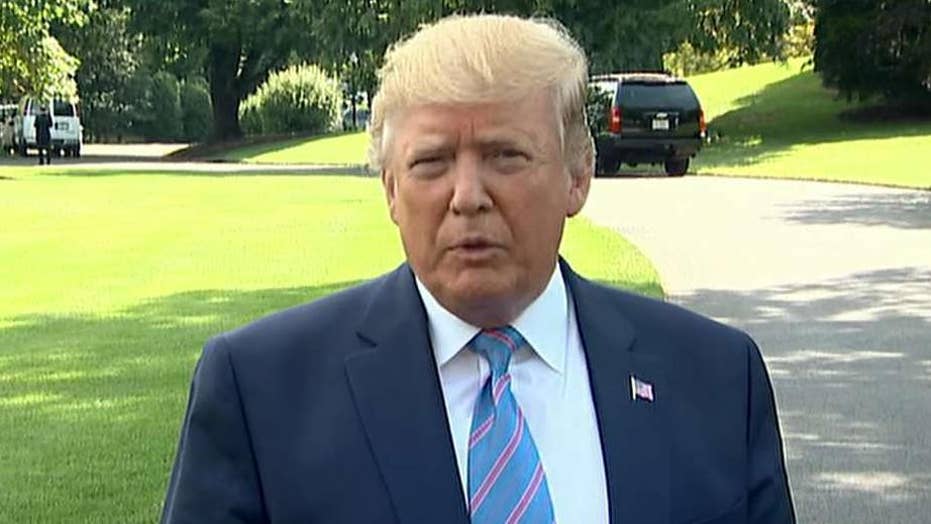 President Trump is set to meet with top U.S. security officials after another round of failed peace talks with the Taliban; Lucas Tomlinson reports.

President Trump on Friday met with his top security officials about the way forward in Afghanistan -- possibly moving toward a phased withdrawal, something critics warn could lead to the Taliban taking hold of the country once again.

Special Envoy Zalmay Khalilzad is back in the U.S. from his negotiations with the Taliban. The two sides have been discussing an agreement in which the U.S. withdraws from Afghanistan, in return for the Taliban promising to ensure that Afghanistan does not become a haven for terrorists and Al Qaeda.

“Discussions centered around our ongoing negotiations and eventual peace and reconciliation agreement with the Taliban and the government of Afghanistan,” White House Deputy Press Secretary Hogan Gidley said in a Friday evening statement. “The meeting went very well and negotiations are proceeding.”

In a statement after the meeting, Pompeo said, "Led by the president, we are working diligently on the path forward in Afghanistan.  In continued close cooperation with the government of Afghanistan, we remain committed to achieving a comprehensive peace agreement, including a reduction in violence and a ceasefire, ensuring that Afghan soil is never again used to threaten the United States or her allies, and bringing Afghans together to work towards peace."

The Washington Post reports that the proposed plan could cut the number of troops in the country from 14,000 to 8,000-9,000 – which would be nearly the same as when Trump took office in 2017.

However, a senior administration official told reporters that the meeting was “routine.”

Trump announced a 4,000-troop increase in August 2017 as part of an effort to break the stalemate in the country. Trump ran his 2016 campaign partly on a platform of bringing troops home from foreign conflicts.

“Well, I don’t want to say if they can be trusted or not,” Trump said earlier this month when asked if the Taliban can be trusted. “Look, history, I would say, is not so good, but they don’t like us much either.  But we’ve brought them down; we’ve brought the number of soldiers down very substantially. They’re coming down. We are talking to them.  We have a lot of advantages making a deal with us. “

The U.S. has pressed for a cease-fire and a framework for Afghan talks, but so far the insurgents have refused to recognize the Afghan government, dismissing it as a U.S. puppet.

But there are fears that such a deal would hand the country over to the Taliban. The group has staged attacks on a near-daily basis since the negotiations began, targeting mainly troops and government officials, but which have also killed civilians.

“To trust the Taliban to control Al Qaeda, ISIS-K and other radical Islamist groups present in Afghanistan – as a replacement for a U.S. counter-terrorism force – would be a bigger mistake than [former President Barack] Obama’s Iranian nuclear deal,” Sen. Lindsey Graham, R-S.C., said in a statement.

The Taliban are at their strongest since the U.S.-led invasion toppled their five-year government in 2001 after the group had harbored Al Qaeda leader Usama bin Laden.