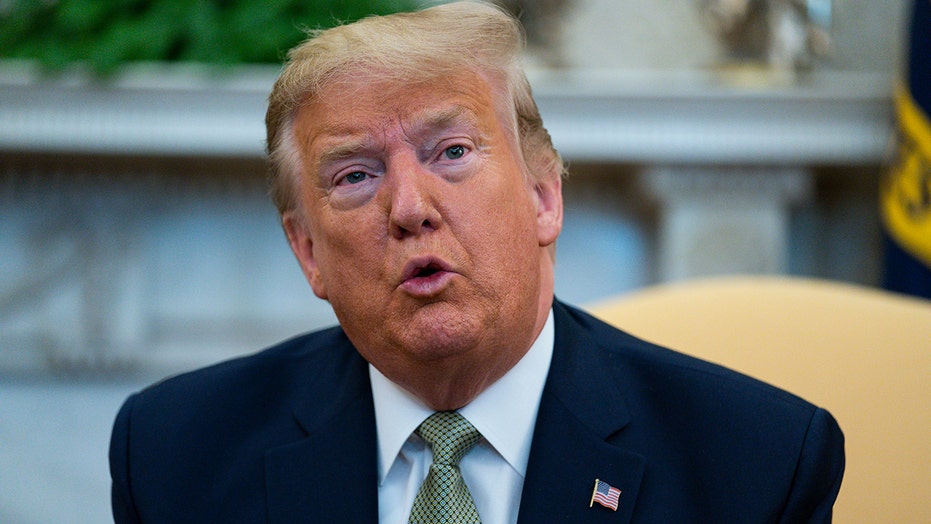 President Trump addresses the nation on the coronavirus pandemic

President Trump announced that he plans to hold a press conference Friday afternoon to address the coronavirus crisis, as concerns over the spreading outbreak wreak havoc on the economy and American life.

Fox News is told the president is expected to declare a national emergency.

"I will be having a news conference today at 3:00 P.M., The White House. Topic: CoronaVirus!" he tweeted.

Declaring an emergency under the Stafford Act would allow Trump to mobilize the Federal Emergency Management Agency (FEMA) and direct federal aid to states. Such a declaration would allow a state to request a 75 percent cost-share for expenses such as emergency workers, testing, medical supplies and vaccinations, Democrats reportedly had said in a letter sent to the president.

The announcement comes as major sporting and other events are called off or postponed, businesses across the country institute telework policies, government buildings and schools shutter and other disruptions rock the nation, amid efforts to curb the transmission of the virus. It also comes amid conflicting reports over whether another person who came in contact with Trump in recent days -- Brazil’s President Jair Bolsonaro -- tested positive.

Bolsonaro’s son Eduardo initially told Fox News that they were doing further testing to confirm the diagnosis. But minutes later, he told Fox News' "America's Newsroom" that the test came back negative.

Bolsonaro had been tested after one of his deputies, who also attended meetings at Mar-a-Lago with the president and vice president, tested positive for COVID-19.

Amid these reports, a number of White House officials were called into an urgent meeting in the chief of staff’s office, Fox News was told Friday morning.

Sen. Lindsey Graham, R-S.C., also announced on Thursday that he was in self-quarantine after attending the meeting with Trump and Bolsonaro’s team at Mar-a-Lago.

The president, at this point, has not been tested for coronavirus, even after having met with individuals who have tested positive for COVID-19 or interacted with others who have.

Earlier this week, several Republican lawmakers went into self-quarantine, after an attendee of the Conservative Political Action Conference on Feb. 26 to Feb. 29 notified CPAC organizers that he had tested positive.

Trump, though, had direct contact with Rep. Doug Collins on a trip last Friday to the Centers for Disease Control and Prevention (CDC) in Atlanta, and Rep. Matt Gaetz traveled on Air Force One on Monday. Both are in self-quarantine.

The president tweeted Friday morning touting "strong border policy," saying that if U.S. borders were weak, more American coronavirus-related deaths would have been recorded at this point.

“To this point, and because we have had a very strong border policy, we have had 40 deaths related to CoronaVirus. If we had weak or open borders, that number would be many times higher!” Trump tweeted Friday.

The president, on Wednesday night after the World Health Organization designated COVID-19 a global pandemic, announced a temporary halt on air travel to the United States from Europe, excluding flights from the United Kingdom and those carrying cargo, in an effort to contain the spread of the virus.

Meanwhile, the National Guard said it would deploy 1,000 troops in six states -- Florida, Iowa, Louisiana, New York, Rhode Island and Washington -- by the end of the day Friday.

"As of this morning, about 400 Air and Army National Guard professionals in six states - Florida, Iowa, Louisiana, New York, Rhode Island and Washington- are providing personnel in support of civil authority at the direction of their governors in response to COVID-19," the National Guard said in a statement Friday. "At the national level, Guard members are training personnel on COVID-19 response, identifying and preparing National Guard facilities for use as isolation housing, and compiling state medical supply inventories."

The statement noted that the National Guard's "first priority is to protect our people while saving lives."