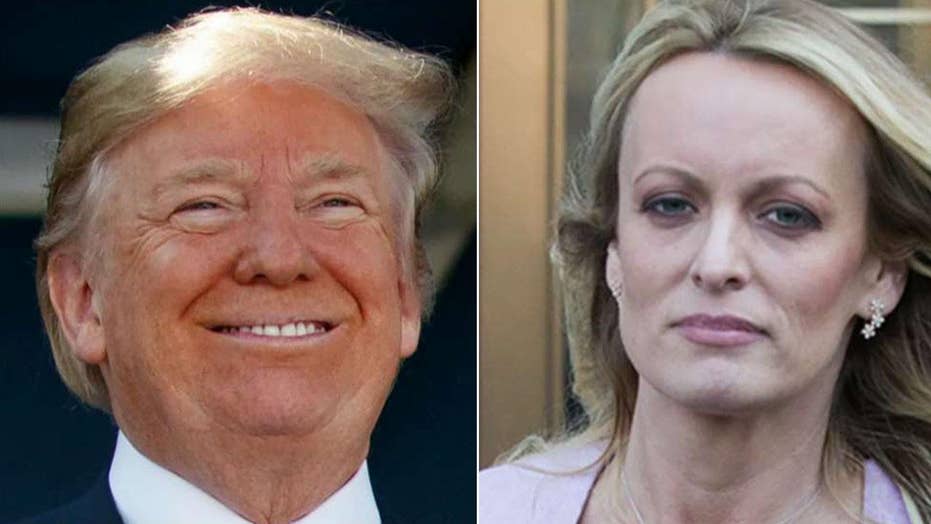 President Trump ratcheted up his legal and personal battle with Stormy Daniels on Tuesday, calling her “Horseface” and threatening to “go after” her and lawyer Michael Avenatti after a federal judge tossed their defamation lawsuit.

“’Federal Judge throws out Stormy Danials [sic] lawsuit versus Trump. Trump is entitled to full legal fees.’ @FoxNews Great, now I can go after Horseface and her 3rd rate lawyer in the Great State of Texas. She will confirm the letter she signed! She knows nothing about me, a total con!” Trump tweeted on Tuesday.

Daniels, the adult film star whose real name is Stephanie Clifford and who says she had an affair with Trump, had sued the president in April over a tweet in which he denied her claims of being threatened by a man in a Las Vegas parking lot in 2011.

A federal judge in Los Angeles on Monday threw out the defamation lawsuit and ordered Daniels to pay the president's legal fees. Trump's reference to Texas apparently stems from the judge citing a Texas law in dismissing the case brought by Daniels, a Texas resident. His mention of a "letter" may be the original statement Daniels wrote and signed in January denying an affair, before she backtracked.

But Avenatti, who is mulling a 2020 presidential run and is one of the president's most vocal critics, swiftly fired back at the latest tweet, blasting Trump as a “shyster” and a “liar.”

“You are a disgusting misogynist and an embarrassment to the United States. Bring everything you have, because we are going to demonstrate to the world what a complete shyster and liar you are. How many other women did you cheat on your wife with while you had a baby at home?” Avenatti replied.

Daniels fired back as well, saying Trump "has demonstrated his incompetence, hatred of women and lack of self control on Twitter AGAIN" -- and joked that his latest tweet revealed a "penchant for bestiality."

Trump has denied the affair allegations but acknowledges a hush-money payment was made.

Daniels, in an exclusive “60 Minutes” interview, had said a man threatened her for going public about the alleged sexual encounter with Trump in 2006. Trump later cast doubt on her alleged parking lot incident.

“A sketch years later about a nonexistent man. A total con job, playing the Fake News Media for Fools (but they know it)!” Trump tweeted in April.

The court, on Monday, ruled in favor of Trump, noting the tweet “constitutes ‘rhetorical hyperbole’ normally associated with politics and public discourse in the U.S.,” according to U.S. District Judge S. James Otero's ruling. “The First Amendment protects this type of rhetorical statement.”

Daniels first came into the spotlight earlier this year, when she sued Trump and his former personal attorney Michael Cohen over a non-disclosure agreement. Daniels said she was paid $130,000 in the weeks leading up to the 2016 presidential election in exchange for her silence about the alleged one-time sexual encounter with Trump.