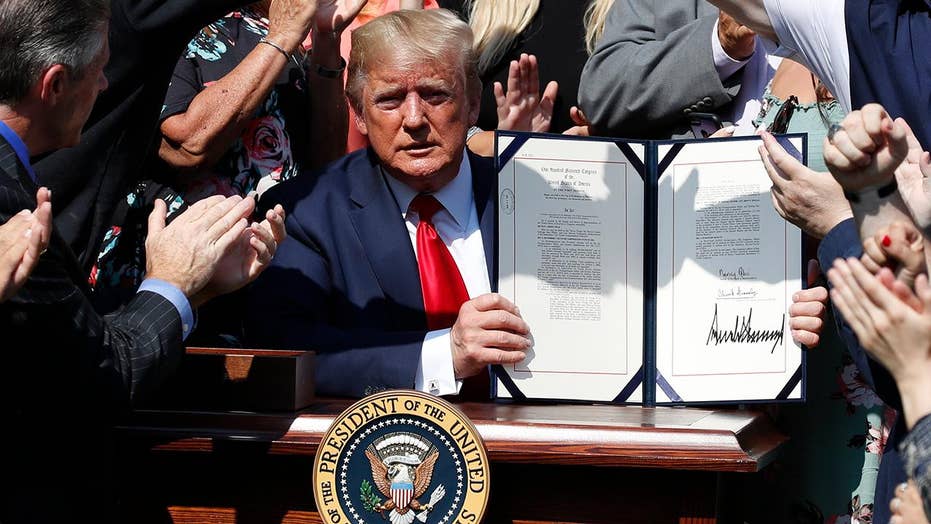 President Trump welcomed 9/11 first responders to the White House Monday morning, as he signed a bill that will ensure continued funding for the 9/11 Victim Compensation Fund.

The bill ensures that first responders suffering from illnesses such as lung disease and cancer as a result of their experiences helping at the sites of the 2001 terror attacks will continue to receive government aid.

“You inspire all of humanity,” Trump said to the first responders in attendance, before bringing them onto the stage where he signed the bill.

The president also recognized the more than 2,000 first responders who have lost their lives due to 9/11-related illnesses. To their families, Trump said, "Our nation owes each of you a profound debt."

Comedian Jon Stewart gave the bill national attention when he brought survivors to Congress and tearfully berated lawmakers for failing to act. "Your indifference is costing these men and women their most valuable commodity: time," he told lawmakers. "It's one thing they're running out of." After Stewart's appearance, the bill swiftly moved through the House and Senate.

Trump thanked lawmakers from both parties for passing the legislation. The Senate approved the bill with overwhelming bipartisan support with a vote of 97-2. Only Sens. Rand Paul, R-Ky., and Mike Lee, R-Utah, voted against it. They proposed amendments to the bill that were rejected.

Paul argued that the bill was "irresponsible" because of advocates' push for a sunset clause that would guarantee funding with no specific dollar amount for the next seven decades. Stewart lamented how thus far, suffering victims had to keep coming to Washington every few years to lobby Congress to keep providing aid. Without the new bill, the fund was expected to have been depleted by December 2020.