Russia denies that they are pulling military forces out of Venezuela

President Trump responds to a question about Russia denying that they have agreed to pull military forces out of Venezuela.

Trump was asked about comments he made concerning the possibility of a Russian troop withdrawal from Venezuela and said the country is falling apart because of its socialist policies.

"Venezuela is obviously in flux, it’s doing unbelievably badly," Trump told reporters in the Oval Office. "This was ... one of the richest countries, had tremendous oil, tremendous everything. It just shows you when you have a bad system, it became a socialistic system or worse, and now people don’t have food, they don’t have water, they don’t have anything. It’s a very sad thing. We’re watching Venezuela very closely."

Trump was then asked why he sent a tweet about Russia's possible troop withdrawal, despite their claims to the contrary. The president remained confident he'd be proven right and said he's always won factual disputes with the media.

Trump went on to call the media distrusting and said it will be a relief to meet with other world leaders at the G20 summit at the end of June, without the press in the room.

TRUMP, XI TO MEET AT G-20 AS TRADE HOSTILITIES PERSIST

This was not the first time Trump had a heated exchange with a CNN personality. The president is known for dueling with CNN's White House correspondent Jim Acosta over the issue of border security and immigration -- most notably during his press conference following the 2018 midterm elections when Acosta refused to surrender the mic. 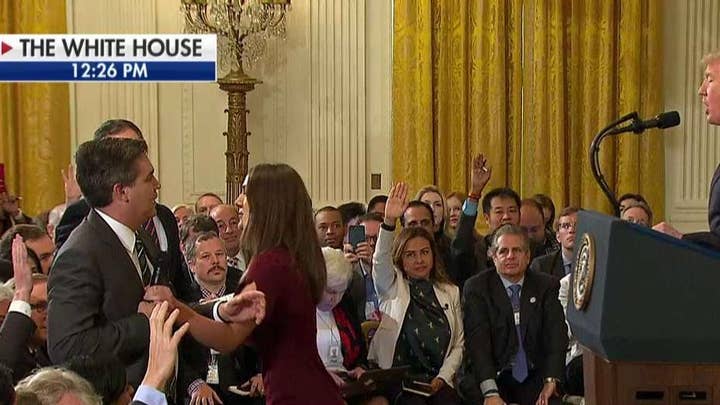 The G20 summit will take place in Osaka, Japan from June 28th to the 29th.