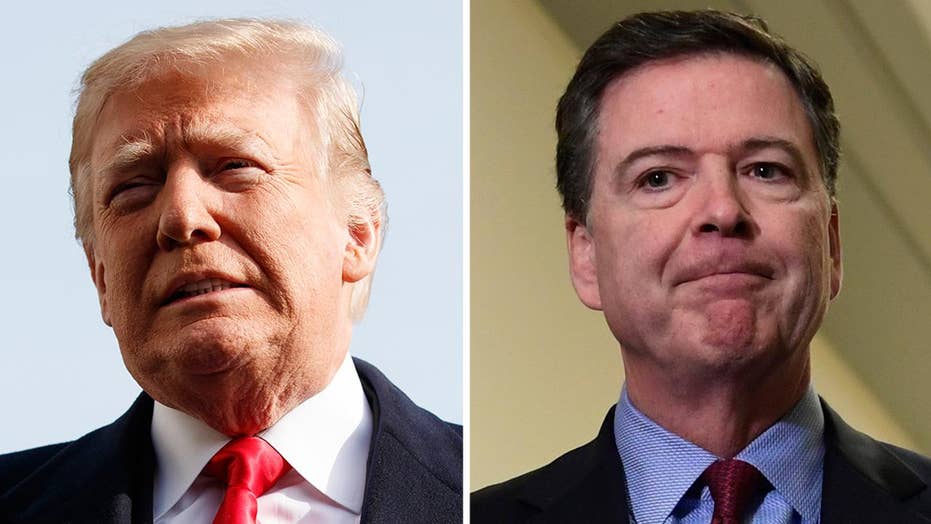 President reiterates there was 'no collusion' on Twitter; Kevin Corke reports from the White House on the fallout from the closed-door testimony.

President Trump on Monday tore into fired FBI Director James Comey and his deputies on the heels of a bombshell report that revealed the bureau launched an inquiry into whether Trump was actually working on behalf of Russia in the wake of Comey’s ouster.

As he departed the White House morning for an American Farm Bureau Federation convention in New Orleans, the president called Comey a "bad cop" and his former bureau allies "known scoundrels."

“I guess you could say they are dirty cops. I have never seen a turnaround in a bureau or agency like I have with the FBI—12 people have now been terminated and others are going to go,” Trump told reporters Monday. “When you say I should have confidence in the FBI—when I see [Bruce] Ohr, and others like Lisa [Page] and her lover [Peter Strzok], and you see what they said about me, let me tell you something, when people see that, you have an angry country.”

He added: “What happened with the FBI … I have done a great service for the country when I fired James Comey. He was a bad cop and a dirty cop and he really lied. He lied.”

Page and Strzok were high-level agents who came under fire after their anti-Trump texts surfaced.

Trump’s comments followed The New York Times reporting that the bureau began investigating whether the president had been working on behalf of the Russian government in the days following Comey's firing in May 2017. The inquiry also had a criminal aspect, according to the Times: whether the president’s firing of Comey was obstruction of justice.

Former law enforcement officials told the Times that the criminal and counterintelligence elements of the investigation were combined because Trump’s firing of Comey could constitute both a crime and a national security threat as it would hinder the agency’s abilities to learn how the Kremlin interfered in the 2016 presidential election.

The president also lashed out against Comey and former FBI officials over the weekend.

“Wow, just learned in the Failing New York Times that the corrupt former leaders of the FBI, almost all fired or forced to leave the agency for some very bad reasons, opened up an investigation on me, for no reason & with no proof, after I fired Lyin’ James Comey, a total sleaze!” he tweeted Saturday.

“Funny thing about James Comey. Everybody wanted him fired, Republican and Democrat alike. After the rigged & botched Crooker Hillary investigation, where she was interviewed on July 4th Weekend, not recorded or sworn in, and where she said she didn’t know anything (a lie),” Trump continued, adding that “my firing of James Comey was a great day for America. He was a Crooked Cop.”

Comey didn’t directly respond to the administration's comments on the report, but tweeted a quote from former President Franklin D. Roosevelt.

“’I ask you to judge me by the enemies I have made.’ –FDR,” Comey tweeted.

Comey was fired on May 7, 2017, and deputy Andrew McCabe was fired in March 2018 by former Attorney General Jeff Sessions, after authorizing a leak to a newspaper reporter about the contents of a telephone call in 2016, in order to cast himself in a positive light in an upcoming story about the FBI’s investigation into Hillary Clinton’s use of a private email server while secretary of state.

Reporters on Monday continued to ask whether the president worked for Russia, in light of the weekend report.

“I never worked for Russia. Not only did I never work for Russia I think it’s a disgrace that you even ask that question because it’s a whole big fat hoax,” Trump told reporters from the White House lawn.

The president’s attorney defending him in Special Counsel Robert Mueller’s investigation into Russian meddling and potential collusion with Trump campaign associates during the 2016 presidential election, former New York City Mayor Rudy Giuliani, blasted the media for not questioning whether the FBI or Mueller investigation “found anything.”

“Doesn’t anyone in the media care enough about the truth to ask the Mueller leakers if the counter intelligence report started a year and a half ago found anything. Obviously if it did the Trump hating leaker would have told the Trump hating press. Proving this is a witch-hunt,” Giuliani tweeted.

“Mueller’s gang eliminated all of Stroyk’s [sic] texts to Page and others during the period the Mueller investigation was started. From his prior texts promising he would prevent or remove the President aren’t those texts highly relevant. Seems like obstruction. INVESTIGATION?” Giuliani continued.

The president’s attorney was referring to text messages between Strzok and Page. Strzok and Page, who exchanged hundreds of anti-Trump text messages, both worked on Mueller’s team for a period of time, as well as on the Clinton investigation. The Justice Department inspector general was unable to recover a series of messages between the two former FBI officials prior to the special counsel was appointed. The two were romantically involved. Page left the FBI in May 2018, and Strzok was fired from the bureau in August 2018.