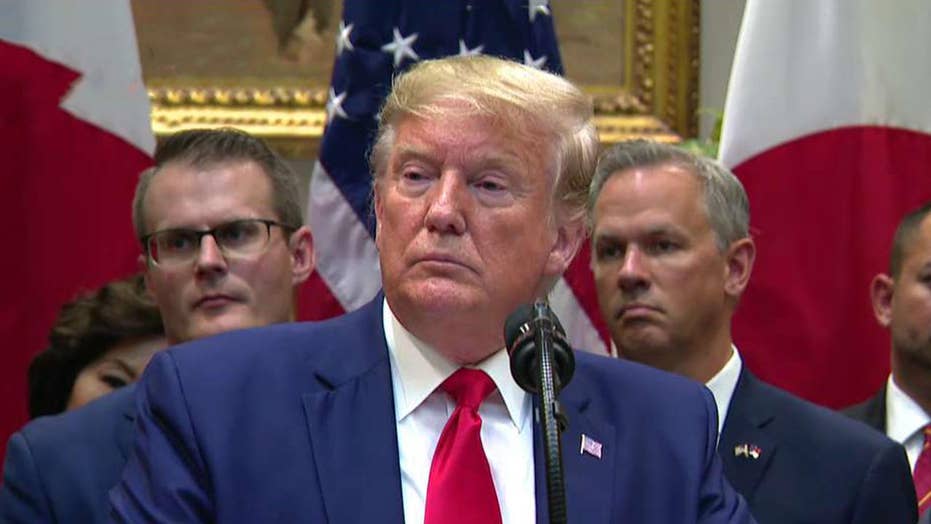 Trump: I'm not siding with anyone regarding Turkey and Syria

President Trump vigorously defended on Monday his decision to withdraw United States troops from northern Syria ahead of a planned invasion of the region by Turkey, even as his Republican allies in both the Senate and House vehemently criticized the move.

In his first public comments since news broke early Monday of the troop withdrawal, Trump said he understood the concerns raised by his fellow Republicans, but added that it was time to fulfill his campaign promise to bring the troops home.

Separately, a U.S. official told Fox News the U.S. military no longer will allow Turkish flights in Syria along the border with coalition aircraft and no longer will share intelligence from drone feeds in the region with President Recep Tayyip Ergodan's forces.

The GOP lawmakers, who have stood lockstep with the president on almost every other issue, have expressed concern that the withdrawal could lead to the genocide of the U.S.’s Kurdish allies and a return to power of the Islamic State in the region.

McConnell, R-Ky., continued, “I urge the president to exercise American leadership to keep together our multinational coalition to defeat ISIS and prevent significant conflict between our NATO ally Turkey and our local Syrian counterterrorism partners.”

The response by Rep. Liz Cheney of Wyoming was not as measured as McConnell’s.

“Withdrawing U.S. forces from northern Syria is a catastrophic mistake that puts our gains against ISIS at risk and threatens America’s national security,” the House Republican Conference chairwoman said in a statement, referencing the terror attacks of Sept. 11, 2001. “Pulling out of northern Syria ignores that painful lesson, represents an abandonment of our Kurdish allies despite their vital contributions to the fight against ISIS, emboldens Iran and serves as an undeserved gift to the Ergodan regime, which has only continued its steady march toward Moscow.”

Trump vociferously defended his decision in a long series of tweets on Monday, saying the ISIS “Caliphate” has been defeated and lamenting that the U.S. was in the region years longer than planned. Reprising the rhetoric on foreign wars he has often used on the campaign trail, he described the fight as a regional conflict for Turkey and other countries to wage -- not America's problem.

“The United States was supposed to be in Syria for 30 days, that was many years ago. We stayed and got deeper and deeper into battle with no aim in sight. When I arrived in Washington, ISIS was running rampant in the area. We quickly defeated 100% of the ISIS Caliphate,” he tweeted.

Trump added in another tweet that if Erdogan's government did anything that “I, in my great and unmatched wisdom, consider to be off limits,” the U.S. would “totally destroy and obliterate the Economy of Turkey.”

The president’s reassurances aside, the White House’s move to withdraw troops and effectively green-light the Turkish invasion has been opposed even by some of Trump’s staunchest allies in Congress.

Speaking on “Fox & Friends” Monday morning, Sen. Lindsey Graham, R-S.C., called it an “impulsive decision” by Trump that would undo U.S. gains in the region and give ISIS fighters a “second lease on life.”

He tweeted: “If press reports are accurate this is a disaster in the making.”

Sen. Ted Cruz, R-Texas, who has had a mixed relationship with the president ever since the 2016 election, went on a tweetstorm himself on Monday in which he lambasted the decision and said it would be “disgraceful” to abandon the Kurds.

“It would also be DISGRACEFUL if we sat idly by while Turkey slaughters the Kurds, as public reports suggest that Turkish leader Erdogan explicitly told President Trump he intends to do. Kurds risked their lives—for many years—to fight alongside us,” Cruz tweeted.

Hours after the White House announcement, Kurdish-led forces in Syria reported that American troops had started withdrawing from areas along Turkey's border. A video posted by a Kurdish news agency showed a convoy of U.S. armored vehicles apparently heading away from the border area of Tal Abyad.

“We're not fighting,” Trump told reporters later. “We're policing to a large extent. At some point, we have to bring our people back home.”

The decision to give Ankara the green light was seen by the Kurdish fighters as a major shift in U.S. policy. Over 11,000 mostly Kurdish fighters in the U.S.-backed Syrian Democratic Forces (SDF) have been killed fighting ISIS in Syria.

Along with congressional Republicans, the withdrawal of U.S. troops has been staunchly criticized by current and former government and military officials, with former ambassador to the United Nations Nikki Haley calling it “a big mistake.”

“We must always have the backs of our allies, if we expect them to have our back,” Haley tweeted. “The Kurds were instrumental in our successful fight against ISIS in Syria. Leaving them to die is a big mistake.”

One U.S. commander who helped lead the anti-ISIS effort told Fox News the decision amounted to a propaganda victory for China and Russia, saying those countries could tell would-be U.S. partners that America will abandon them.

“No one will ever partner with us again,” the commander said.

As for Turkey's intentions with the Kurds, the senior military officer said: “They are going to slaughter those cats.”

Trump also called on European nations to take back captured ISIS militants and their families to lessen the burden on American taxpayers.

“We defeated the caliphate 100 percent and now it's time for Germany and France and all of the nations where they came from to take them back,” he said.