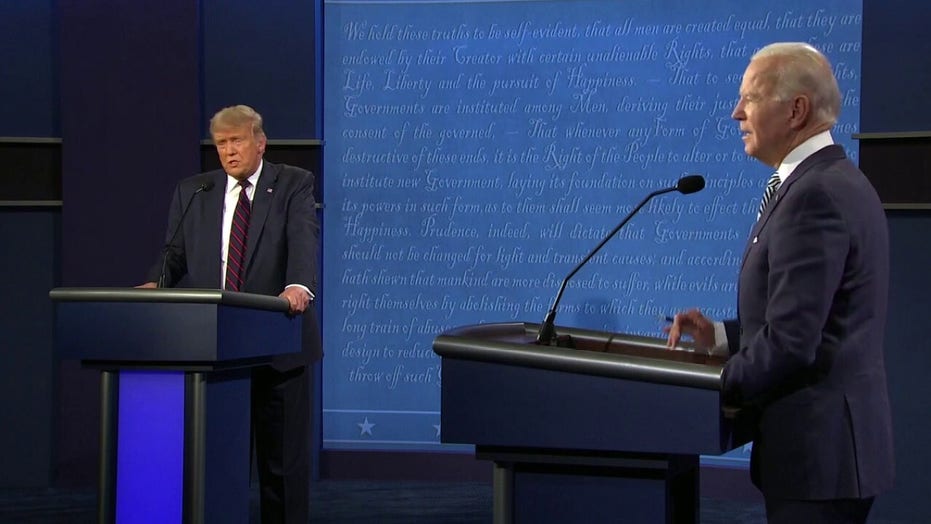 Trump challenges Biden claim Roe v. Wade is on the ballot this year

President Trump said Tuesday night there’s “nothing happening” in the Supreme Court with Roe v. Wade, and it isn’t on the ballot with the latest Supreme Court vacancy.

"Roe v. Wade. That's also at stake right now," Joe Biden said during the presidential debate, arguing Judge Amy Coney Barrett should not be confirmed to fill the seat vacated after the death of Justice Ruth Bader Ginsburg before the election. He said abortion rights granted by Roe v. Wade were “also on the ballot.”

“You don't know what her views are,” Trump said of Barrett.

LIBERAL WOMENS' GROUPS SLAM BARRETT, CLAIM SHE WILL 'TURN BACK THE CLOCK' ON EQUALITY

On Sunday, Trump told Fox and Friends Weekend that if Barrett were confirmed by the Senate, it was “certainly possible” that the 6-3 conservative majority would rule on a “life issue.” “It’s certainly possible. And maybe they do it in a different way. Maybe they’d give it back to the states. You just don’t know what’s going to happen.”

‘“She is certainly conservative in her views, in her rulings, and we’ll have to see how that all works out, but I think it will work out,” the president said of his Supreme Court nominee.

Trump in 2016 promised to overturn Roe v. Wade in a presidential debate.

"That will happen automatically, in my opinion, because I am putting pro-life justices on the court," Trump said. "I will say this: It will go back to the states, and the states will then make a determination."

In 2017 when Barrett was confirmed to the 7th Circuit Court of Appeals, Sen. Dianne Feinstein, D-Calif., said she assumed Barrett would be a “no vote” on Roe v. Wade.

Barrett, while a Notre Dame law professor in 2016, was asked about ways a future Supreme Court might potentially allow states to further restrict abortion.

Still, Democrats have sounded the alarm on Barrett’s nomination and how it could play out in the abortion debate, particularly noting her devout Catholic faith.

“Barrett's history of hostility toward reproductive health and rights, expanded health care access, and more demonstrate that she will put Justice Ginsburg's long record of ensuring that everyone receives equal justice under the law at risk," she said.