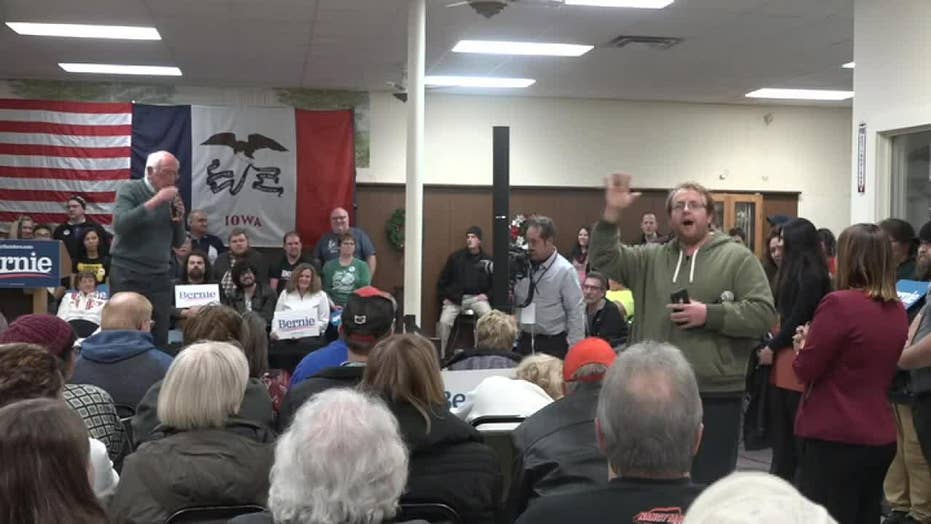 A man took the microphone at a Sanders rally in Iowa on Saturday and started praising President Trump.

A Trump supporter took center stage at an Iowa campaign event for 2020 presidential candidate Sen. Bernie Sanders, I-Vt., on Saturday, where he stood up and delivered a message to President Trump.

Sanders sensed trouble from the beginning when he saw the young man approach the microphone and said, "Oh, he's looking at his phone. I'm in trouble."

After being given the mic to ask Sanders a question, the man addressed the commander in chief directly, offering him words of encouragement.

DID JOE BIDEN CALL AN IOWA VOTER 'FAT' DURING HEATED EXCHANGE? TWITTER SURE THINKS SO

The man was then briefly cut off by boos from the crowd before Sanders urged them to let him finish. The man said he voted for Sanders during the 2016 Democratic primary but is now fully behind the president.

"I don't agree with anything you say. I used to. I voted for you in 2016," he said. "And I've been to Vietnam and seen what socialism has done. It's destroyed the lives [of many]."

The crowd mockingly laughed at his claims before he hit back, and reiterated the failures of socialism.

"You can laugh all you want," he shouted. "Donald Trump is helping our country. All right? He's a good man... Socialism does not work."

Bernie and the unidentified man continued to shout over one another until the man was escorted out of the room by what appeared to be law enforcement.