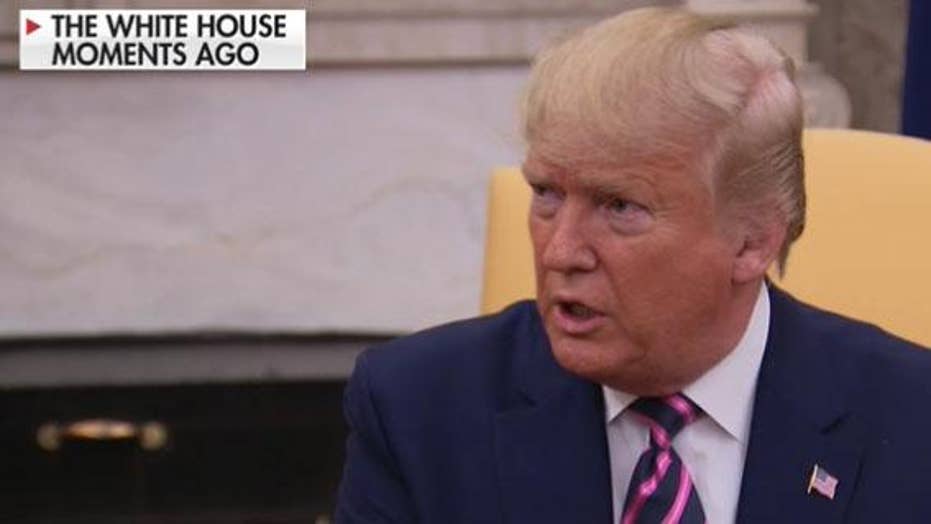 President Trump called Speaker Nancy Pelosi a "liar" and accused Democrats of trivializing an impeachment process that should only be used "in an emergency," in his first comments after House Democrats advanced articles of impeachment against him.

"It's a scam. It's something that shouldn't be allowed," Trump said in the Oval Office Friday. "And it's a very bad thing for our country and you're trivializing impeachment. And I tell you what, someday there will be a Democrat president, and there will be a Republican House."

"And I suspect they're going to remember it," he said. "Because [that's what happens] when you use impeachment for absolutely nothing other than to try and get political gain."

Trump insisted he did nothing wrong and blamed the impeachment "hoax" on Democrats looking for any reason to try to oust him from office.

He pointed to Pelosi's recent interview at Politico’s Women Rule Summit, where she pushed back on criticism that the impeachment process was moving too quickly.

“It’s been going on for 22 months. Two and a half years, actually,” Pelosi said.

Republicans have seized on those comments as evidence Pelosi and House leadership have been plotting impeachment since Trump was elected and were just waiting for another controversy to pounce.

"It showed she's a liar," Trump said of the comments, saying Pelosi got "duped."

"It's a very sad thing for our country but it seems to be very good for me politically ... The polls have gone through the roof for Trump."

He continued: "The impeachment is a hoax. It's a sham. It started a long time ago -- probably before I came down the escalator with the future first lady."

Trump’s comments come shortly after the House Judiciary Committee approved two articles of impeachment against him for abuse of power and obstructing Congress in a party-line vote. The full House will vote as early as Wednesday on whether to impeach the president.

Democrats allege that Trump violated his oath of office by pressuring the president of Ukraine to interfere in the 2020 election when he requested investigations into his political rival Joe Biden and son, Hunter. Trump asked Ukraine’s Volodymyr Zelensky for the investigations in a phone call on July 25 – as the White House put a hold on nearly $400 million in aid.

Trump insists the call was “perfect” and House Republicans have slammed Democrats for trying to overturn the results of the 2016 election for conduct that doesn’t warrant impeachment.

The House Rules Committee will meet on Tuesday to set up the terms of the impeachment floor debate likely for the following day. Pelosi needs 216 votes -- assuming all members are present and voting -- to impeach Trump. That would set up a trial in the Senate, where Trump is expected to be acquitted.

Long before the Ukraine controversy came to light, Pelosi said she wasn’t in favor of impeaching Trump because it would be too rancorous for the country.

“Impeachment is so divisive to the country that unless there’s something so compelling and overwhelming and bipartisan, I don’t think we should go down that path, because it divides the country,” Pelosi told The Washington Post Magazine in March. “And he’s just not worth it.”

But those remarks were in reference to allegations Trump colluded with Russia in the 2016 presidential race. Pelosi got on board with impeachment on the narrower issue of Ukraine.

Trump made his impeachment remarks during an Oval Office meeting with Paraguay President Mario Abdo Benítez, just as he was finishing up a trade deal with China.