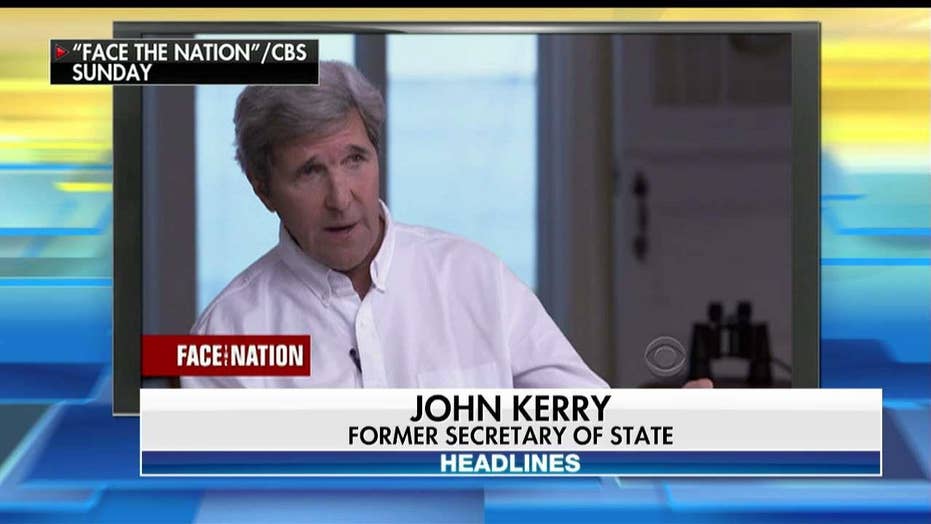 John Kerry: US 'Paid a Price' for Not Enforcing Obama's 'Red Line' in Syria

President Trump slammed John Kerry on Monday, labeling the former Massachusetts senator and secretary of state the “father” of the Iran nuclear deal amid speculation that Kerry could challenge Trump in the 2020 election.

“I see that John Kerry, the father of the now terminated Iran deal, is thinking of running for President,” Trump tweeted. “I should only be so lucky - although the field that is currently assembling looks really good - FOR ME!”

The tweet from the president came amid speculation that Kerry, the Democratic nominee who ran unsuccessfully against President George W. Bush in 2004, is considering another run in two years.

Kerry, 74, has refused to rule out another run for the White House in 2020, but has urged Democrats to focus on the midterm races.

"Talking about 2020 right now is a total distraction and waste of time," Kerry said in an interview with CBS News' "Face the Nation."

"What we need to do is focus on 2018. We need to win back the confidence of the country to move in a better direction, and to do it in sensible ways," he said.

Kerry said that for now he will “continue to be an activist.”

He added, “I’m going to continue to fight.”

In January, the Israeli newspaper Maariv reported that Kerry, during a visit to the Middle East, told Palestinian officials he was considering running for president in 2020.

Trump has been critical not only of the Iran deal but also of Kerry’s role in negotiating the now-defunct agreement. The president repeatedly has called Kerry the “worst negotiator I’ve ever seen.”

Kerry also criticized former President Barack Obama in his CBS interview, arguing that Obama should have followed through on his infamous “red line” warning to Syria, and that the United States “paid a price” as a result of Obama's inaction.